'A stupid prank'?: Why has Austria vetoed enlargement of Schengen area?

Austria voted against Bulgaria and Romania joining Europe's control-free travel zone, the Schengen area - although it did accept Croatia's entry. What are Vienna's arguments for rejecting the major expansion of the zone?

On Thursday, EU members were set to vote on enlarging Schengen, the borderless area within the continent, by adding three new members: Croatia, Bulgaria and Romania.

All three are already European Union members, meaning their citizens enjoy the freedom of movement rights within the bloc. So, Croatian, Bulgarian or Romanian citizens can already live and work in Austria if they want.

The Schengen zone is a separate agreement, one that also includes non-EU members. Within the area, there are no border controls (with certain emergency exceptions, such as what happens when there is a terror threat or during the pandemic).

So if you travel from Austria to Italy, for example, you won't need to show any documents on the Italy-Austria border because both countries are a part of the Schengen zone.

However, if you travel from Austria to Croatia, a very popular summer destination, you can drive right through the Austrian-Slovenian border but will have to show proper travel documents when crossing to and from Croatia.

This is set to change in 2023, though, as Croatia did get the unanimous approval it needed to join Schengen. Austria vetoed the joint application of Bulgaria and Romania, though.

Schengen 'does not work'

A few hours before the decisive meeting of EU interior ministers, Federal Chancellor Karl Nehammer (ÖVP) had reiterated Austria's 'no' to Bulgaria and Romania joining the Schengen area, as reported.

At a joint press appearance with the European People's Party (EPP) leader, Manfred Weber, Nehammer pleaded on Wednesday evening in Vienna for the decision to be postponed until next autumn. Weber understood Austria's worries and concerns but not the veto.

During a brief press appearance, Nehammer underlined Austria's arguments that the Schengen area "does not work". If Austria, as an internal Schengen country, had already picked up 75,000 unregistered migrants this year, this was a "security issue that we cannot wipe away", he said.

Austria's Interior Minister Gerhard Karner echoed the statements ahead of the meeting.

"I think it is wrong that a system that does not work in many places should be enlarged", he said. 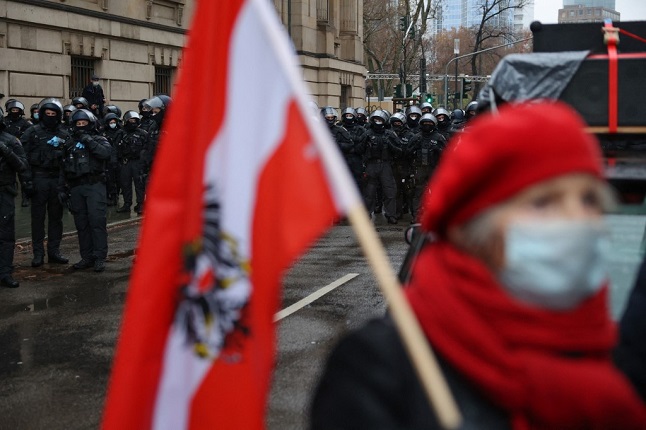 A protester hold the Austria flag as police block a rally against Covid-19 restrictions - many of these protests had a nationalistic root. (Photo by Yann Schreiber / AFP)

A critical issue at home

Immigration is a hot topic in Austria, especially since the migrant crisis of 2015-16. Many credit the strong stance against migration taken by the centre-right ÖVP and, in particular, by its young and popular leader Sebastian Kurz for the good results the party had in national elections - eventually putting Kurz in the top Chancellor position.

The wunderkind would later fall from grace amid allegations of corruption, but his party still leads Austria and many of its provinces.

Even as the migrant wave of 2015-16 passed (and much of the promises made by far-right leaders of what would happen to an Austria that accepted migrants did not come to pass), the issue continues to feed domestic politics.

Austria's ÖVP, in the federal coalition with the left-leaning Greens, has maintained a tough stance on migration, but not as hard as some might want. The far-right FPÖ, however, continues to make extremist statements and build on islamophobia and xenophobia speeches.

“The issue is fuelled by riots like the one in Linz, tent debates, rising asylum numbers, and border protection debates. This creates fear”, said Christoph Haselmayer from the poling institute IFDD.

Prior to the meeting of EU interior ministers, criticism of Interior Minister Karner's stance came from the SPÖ and NEOS, but also party colleague and Vice-President of the EU Parliament Othmar Karas (ÖVP). A Schengen blockade would not contribute to solving the asylum problem and had nothing directly to do with it, they said.

Mixing the two was "irresponsible and unspeakable", Karas said.

The former Czech Foreign Minister Karel Scharzenberg was equally harsh in his criticism of Vienna's veto.

"It's blank domestic policy. I appreciate Austria's role in the Balkans. But this veto is a stupid prank. Hopelessly self-centred. Austria is disregarding its historical duty to take on these countries." Schwarzenberg said in an interview with the Kleine Zeitung.

Why did Austria vote in favour of Croatia?

With Croatia, there is a different story. Austrian authorities have supported the country's accession, saying that Croatia has proven it has strong border controls and would protect the Schengen borders.

Recently, Croatian Interior Minister Davor Božinović told Croatian media that he expected Croatia to become a zone member on January 1st, 2023. “Since the beginning of our accession to Schengen, Austria has supported our entry. Nothing has changed there”, he said.

He said he evaluated Austria's tough stance on Schengen enlargement as more of a “domestic political calculation to keep the migration issue simmering”.

Currently, Croatia is not part of the route taken by many Middle-Eastern asylum seekers, who mostly enter Austria after passing through Turkey, and Southern Balkan states and finally crossing Hungary into Austria.

At the same time, Croatia is, as mentioned, a popular destination for Austrian tourists in summer - and the frequent traffic jams they face might not be enough of a reason for the authorities to approve Croatia's bid, but will undoubtedly make it a more popular decision among many Austrians.