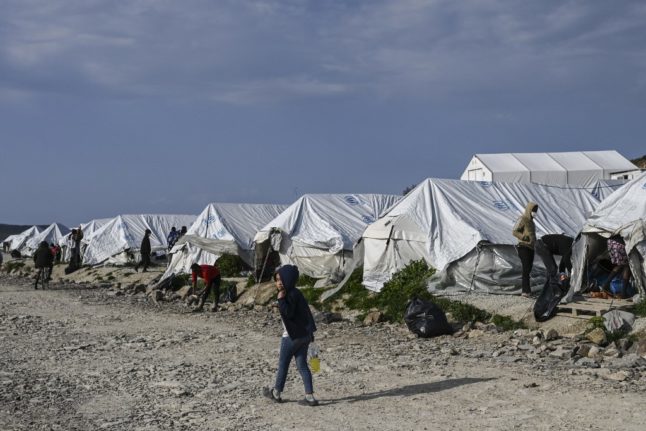 A child walks past tents inside the new refugee camp of Kara Tepe in Mytilene, on Lesbos, on March 29, 2021. - Similar tents are being set up in Austria. (Photo by ARIS MESSINIS / AFP)

Arrivals in the Alpine EU nation are increasing — but unlike seven years ago, it’s due in part to stricter border controls implemented by the conservative-led government.

Now that federal shelters are full, authorities have erected 40 tents, each housing up to eight people, at three points near Austria’s border with Germany and two others near Slovenia. That move has sparked fear, political positioning and accusations of inhumane treatment.

Tens of thousands of people sought asylum in Austria, a country of nine million, in 2015 with images like packed train stations leading to a surge in popularity of anti-immigration politicians.

READ ALSO: Why is Austria resorting to tent accommodation for asylum seekers?

At present, Austria has tripled capacity this year to host 8,000 people in government housing but all beds have been taken, authorities noted, making it necessary to set up tents.

“These are short-time emergency measures to increase our capacities on a day-to-day basis,” Thomas Fussenegger, a spokesman for the federal agency in charge, told AFP.

According to authorities, hundreds of people have been intercepted daily in recent weeks after crossing into Austria.

Even though most continue on to nations further west, those who arrive must apply for asylum to avoid being expelled. The government has also stepped up border controls — which has increased the official tally of arrivals.

In addition, Austria is supporting tens of thousands of Ukrainians who have fled the war in their home country. Under a special arrangement, they do not need to apply for asylum.

Like in previous years, those applying in Austria are mainly from conflict-torn Syria and Afghanistan, but Indians, Tunisians and other nationals have arrived as well.

European Union member states have blamed Serbia’s visa-waiver policy for attracting a broader group of migrants and serving as a springboard to enter the bloc.

The appearance of the tents since mid-October has provoked strong, mostly critical reactions in Austria.

Prominent refugee support groups published an open letter to the government last week urging authorities to work together better on asylum seeker housing. “Refugees in Austria are having to live in tents again. Nobody wants that and this inhumane accommodation is absolutely avoidable,” they said.

A 19-year-old from Syria, Khaled, told Die Presse daily in the small town of Sankt Georgen im Attergau in western Austria: “It is cold at night… We are freezing here.”

In Sankt Georgen im Attergau, 17 tents have not exactly been welcomed.

The conservative mayor, Aigner Ferdinand, echoed the refugee defence groups, objecting to the tents because they were “inhumane… especially at this time of year”, with winter on its way.

But he also noted the “fear” expressed by some locals at seeing groups of young men arriving.

These words sound similar notes as the debates in recent years in Germany after the arrival of nearly a million Syrians fleeing the war as well as Afghans or Iraqis.

“You have knowingly led our country into the same kind of disaster that we saw in 2015 and that will only get worse,” FPOe leader Herbert Kickl argued.

While the party is currently weakened, it held power from 2017 to 2019, in tandem with the conservatives of the young chancellor Sebastian Kurz, in the wake of the migration crisis