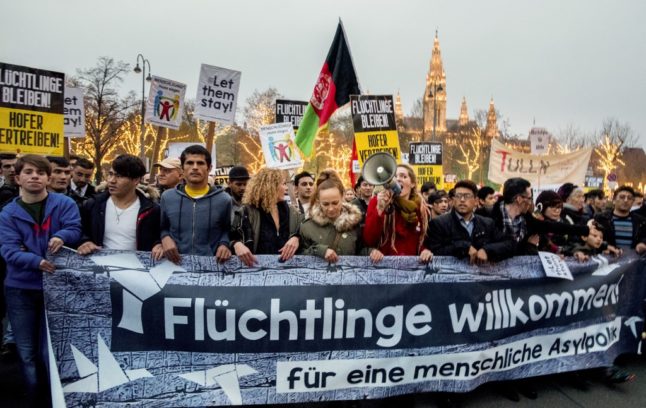 Austrian citizens and asylum seekers march during a pro-refugee protest called "Let them stay" in Vienna, Austria on November 26, 2016. - The issue of migration has been a polarising one in the country. (Photo by JOE KLAMAR / AFP)

In May 2022, Austria’s Interior Ministry launched new controls looking to reduce instances of “smuggling and asylum abuse”. Since then, it has apprehended thousands of people either trying to illegally cross the borders or trying to smuggle others in. In most cases, the attempts happened in Burgenland, Austria’s most eastern state which borders Slovakia, Hungary, and Slovenia.

According to Karner, the actions aim to “support those people who need our help, but to show a clear line when people exploit or even abuse the system”.

Since the beginning of May, 440 traffickers have been apprehended, 172 of them in Burgenland, stated Franz Ruf, Director General for Public Security. In the whole of the previous year, there were a total of 441 traffickers, and in 2020, 311.

Who are the migrants?

By the end of August, Austria had received 56,000 asylum applications, the interior minister said. Almost 15,000 of them came from people from India and Tunisia, who have “practically no chance of asylum”, according to the authorities.

READ ALSO: REVEALED: Which Austrian states have the most foreign residents?

From January to August, people from Afghanistan were in first place with 12,000 asylum applications, followed by Syrians with about 10,000 applications, and Indians filed 7,600 applications for asylum in the first eight months.

According to the ministry, the trend is likely to continue in September. This is because the number of people applying for asylum has “increased dynamically, dramatically”.

What is the difference between a refugee, an asylum-seeker and a migrant?

According to the UN Refugee Agency:

“People who are forced to flee their country in fear of persecution are refugees. They have legal protections under the 1951 Refugee Convention and its 1967 Protocol, as well as other legal instruments. UNHCR, governments and humanitarian organizations offer assistance to refugees, who are recognized by State authorities or UNHCR, because it is too dangerous for them to return home. Asylum-seekers are people whose request for refugee status, or asylum, is being processed.

“People who move to a different country primarily to improve their lives by finding work or gaining education, or to reunite with family, are called migrants.

“This distinction is important. States interact with refugees through specific norms dealing with refugee protection and asylum defined in regional and international frameworks.”