Reader question: Will a dual-citizen child in Austria have to choose between nationalities?

Austria has strict rules on citizenship and it won't allow dual citizenship in most, but not all, cases. Will a child have to choose when they reach 18?

Austria has some of the strictest naturalisation rules in Europe. Besides being expensive (with fees and costs totalling more than €2,000 in some cases), the process usually means applicants need to renounce their original citizenship.

Dual citizenship is simply not allowed for most people in Austria. This not only means that applicants have to give up citizenship of their own country to naturalise but also that Austrians living abroad would have to give up being Austrian citizens if they wish to have full rights (including voting) where they live.

According to the law, there are only three cases when dual citizenship is allowed in naturalisation cases.

First, if the retention of original citizenship is in the Republic of Austria’s interest–usually due to a person’s achievements or status, a famous case is that of Styria-born Arnold Schwarzenegger. The actor and politician asked (and was granted the right) to retain his Austrian citizenship as he naturalised as a US citizen in 1983.

Second, if personal reasons are worth considering, the law doesn’t provide any specific examples and an exception would depend on individual circumstances.

Third, if descendants of victims of the national socialist regime acquired Austrian citizenship.

However, things are much different when it comes to citizenship by descent - such as when a child is born to an Austrian mother or father.

You can read more about the rules for granting citizenship by descent and how to apply for it HERE.

The most important thing, though, is that if a child has the blood right to Austrian citizenship and a blood right to another citizenship, they will be entitled to both and will be a dual (or more) in Austria.

If an Austrian mother and an American-Croat father have a child, that child will be entitled to Austrian, American and Croatian citizenship. And, also important: it will not have to choose between any of them once it turns 18. 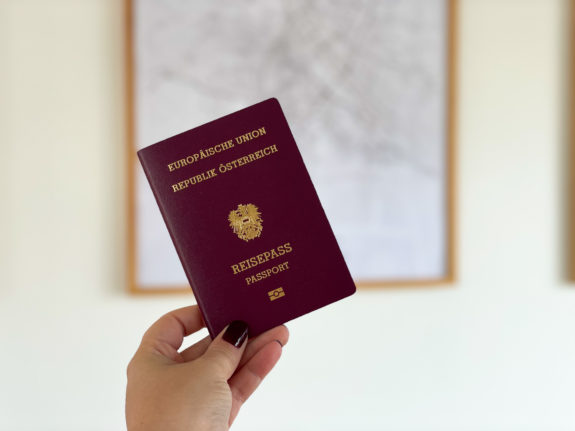 Austrian citizenship is not easy to get. (© The Local)

The myth of "having to choose once they are 18" is widespread in Austria, but it is not true. The Austrian government website is clear on this:

"If, in the case of parents of different nationalities (Austrian and another), the principle of descent also applies in the country of origin of the foreign parent, the child is a dual citizen. According to Austrian law, the child does not have to decide on a nationality when he or she reaches the age of majority - however, it may be that the other state requires a decision," the website states.

It will all depend, then, on the other country. If it allows multiple citizenships through descent and doesn't require a decision after the age of majority, then the person will be a dual (or multiple) national.

How can someone lose Austrian citizenship?

This doesn't mean that this person will have the citizenship forever. There are several cases in which someone may lose Austrian citizenship, including by deliberately acquiring a foreign nationality (unless the person applied for and was granted retention of citizenship).

So, a dual citizenship child will never have to choose?

Actually, yes: there is one case in which a dual citizenship child will have to choose to either give up the Austrian or the other citizenship once they reach the age of majority.

If a child is naturalised Austrian with their parent, but the country of the original citizenship does not allow minors to renounce, they will keep both. For example, a British father is naturalising Austrian and adds his 10-year-old son to the naturalisation process.

Once the process is done, both of them will be granted Austrian citizenship and have two years to renounce their British citizenship. However, the UK does not allow minor children to renounce citizenship. So, the father will have to show proof of the UK law to Austrian authorities.

The child will temporarily hold both Austrian and UK nationalities but will be expected to give up one once they turn 18.

Brian Stephens 2023/01/14 14:43
That is the best news ever. I have 2 children from an Austrian mother (ex wife) and an Australian father (me) who have dual citizenship and passports. One was born in Austria and the other in Australia. I was always led to believe that they would have to renounce one citizenship when they reach 18 years old. If I understand this correctly they will be able to keep both nationalities.