Discover Austria: 19 ways to make the most of autumn this year

The sun might still be shining but the seasons are changing and autumn is just around the corner. Here’s how to fully embrace the season this year.

It’s no secret that winter in Austria is long and cold.

This is why it’s so important to make the most of autumn before the winter really kicks in.

Here’s how to make that happen with our selection of events, activities, places to see and seasonal foods to eat.

A preview of this year’s programme includes feature films from France, Kazakhstan, US, Canada, Greece, Austria and the UK. As well as a monograph on Elaine May – the award-winning American comedian, actress, playwright and filmmaker.

Screenings take place at various venues across Vienna, such as Gartenbaukino on Parkring, Stadkino im Künstlerhaus and Urania on Uraniastrasse.

The full Viennale programme will be published on October 11th at 8pm and the ticket presale starts on October 15th at 10am.

Oktoberfest is another autumn event to add to your list of seasonal fun.

The annual celebration of beer, dirndl and lederhosen might originate in Munich, Germany, but Austria is not one to be left behind. As a result, there are many Oktoberfest events that take place across the country from mid-September to early October.

Unfortunately, Vienna’s Wiesn event has already been cancelled this year due to difficulties in securing a venue (according to the official website).

But similar events are taking place, like Knödelfest in St Johann in Tyrol on September 24th, which is a one-day festivity of dumplings, beer and traditional music.

If Oktoberfest-style events are too kitschy for you, then check out Vienna’s Craft Bier Fest instead. It takes place from November 18th and 19th at the Marx Halle and visitors can sample beers from local and international brewing companies.

Autumn can be one of the best times of the year in Austria for a hiking adventures as temperatures are cooler but there is still plenty of sunshine.

If you're in the mood for a multi-day hike, then try the Adlerweg (Eagle’s Trail). It can either be broken down into smaller hikes or completed in one go in around four weeks.

The trail traverses classic alpine landscapes in Tyrol from St Johann to St Anton am Arlberg. However, some huts close from around mid-October before the winter sets in, so keep that in mind when planning a hiking trip.

Alternatively, get involved in Vienna’s Wine Hiking Day on September 24th and 25th.

Every year, Viennese wine taverns (Heurigen) open to hikers searching for a panoramic view of the city while sampling local wines. Participants can choose from four different routes for the hike – ranging from 2.4km to 9.6km.

If hiking is not your thing, you can take the Heurigen Express instead. This is a dedicated train service that departs from the U4 station at Heiligenstadt and takes you into Vienna’s wine country.

If you prefer to explore the great outdoors on two wheels, then head to Burgenland to cycle along the province’s extensive bike trails. Burgenland has a slightly warmer climate and so enjoys a longer outdoor season than other parts of Austria.

Or test your stamina with a multi-day cycle from Vienna to Linz, the capital of Lower Austria, along the Danube cycle path. 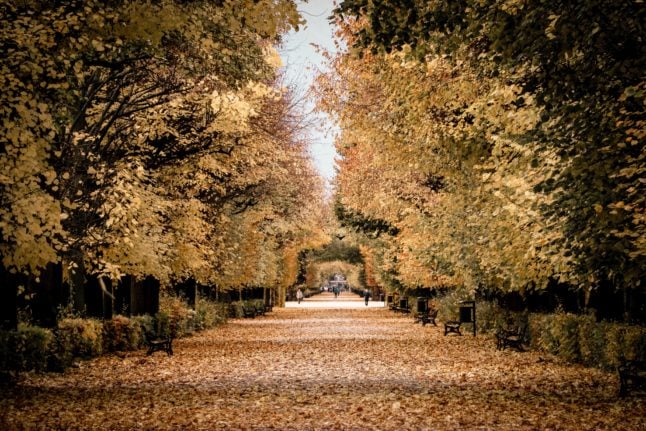 Autumn in Vienna (Photo by Ashkan on Unsplash)

Autumn is a great time for a city trip in Austria, especially as the weather gets colder and wetter in many parts of the country.

Vienna is always a top destination for a weekend getaway and if you can squeeze in a visit while the Viennale is on, then even better. But there are always plenty of other attractions to enjoy in Austria’s capital city, from museums to restaurants and live music.

Then there is Linz, which is home to Ars Electronica, a cultural institution with a focus on new media art. Highlights in the autumn programme include the Deep Space Concert with keyboardist Gerald Peter on September 21st, and a Familienwochende (family weekend) on September 24th and 25th.

On the other hand, if you want to venture off the beaten path, head to Eisenstadt, the capital of Burgenland.

Eisenstadt is a little-known (and small) city but boasts lots of culture, such as the grand Esterházy Palace. There is also an historic old town with shops, cafes and restaurants, and several Heurigen in the districts of St. Georgen and Kleinhöflein.

A switch to cooler weather is the perfect time to sample regional, hearty food in Austria, and there is nothing more Austrian during autumn than Schwammerl.

A Schwammerl is a large mushroom (the name comes from Austrian and Bavarian dialect, so it doesn’t mean the same as Pilz, which is just mushroom) and they are found in forests across the country from late summer.

The best way to find Schwammerl in Austria is to go foraging yourself – as long as you know what you are looking for.

But if you’re not interested in picking mushrooms, you can find Schwammerl at most supermarkets, independent grocery stores and farmers markets during autumn.

Alternatively, if you want to sample fresh mushrooms but can’t be bothered to cook, then head down to your favourite Austrian restaurant to try a regional Schwammerl dish.

For wine lovers out there, autumn is also Sturm season in Austria.

From late September to early October, Sturm – fermenting grape juice that is on its way to becoming wine – is served at Heurigen across the country.

Sturm has the look of cloudy, unfiltered beer but has a fresh, juicy flavour. It is most popular at Viennese Heurigen where you can usually sample local food alongside your glass of fermenting wine.

Find out more about Austria’s wine scene with The Local’s guide to the best wineries in the country.