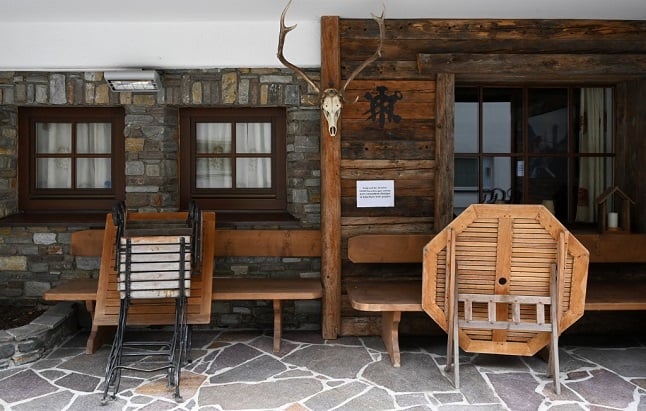 Chairs and tables outside a closed restaurant during a previous Austrian lockdown. Photo: Christof Stache/AFP

Editor’s note: After publishing this article on Thursday, Austria announced a nationwide lockdown to start from Monday, December 22nd, as well as compulsory vaccination for the whole population. Read more here.

The current rise in cases has prompted the two regions with the highest infection rates, Salzburg and Upper Austria, to announce a new lockdown for the entire regional population starting next week.

It is possible that the measure will be adopted nationwide as well.

Last week, a lockdown for the unvaccinated was initially announced for these two regions alone before being implemented across the whole of Austria. The government is set to meet with regional leaders on Friday to decide on any possible new national measures.

Back in September, then-Chancellor Sebastian Kurz announced any future lockdowns in the country would only be for the unvaccinated. It’s a plan that his successor Alexander Schallenberg has stuck to, and the Salzburg and Upper Austria governors have also spoken out against lockdowns in recent days. But the situation has been evolving rapidly.

“At the moment, numbers are skyrocketing and no relief is in sight. For a major change, we would need much stronger measures, for example complete curfew during nighttime with exceptions for emergency situations,” said Erich Neuwirth, a statistician who has been analysing Austria’s Covid-19 data throughout the pandemic and advising Viennese authorities on their strategy.

Recent weeks have seen Austria repeatedly hit new all-time highs in the number of new Covid cases reported daily, while hospitals are under increasing strain, particularly in Salzburg and Upper Austria but also across the country.

“So far, complete lockdowns have been effective in breaking waves, but they were introduced at much lower incidence levels than we have at the moment,” Neuwirth told The Local. Last December’s lockdown was introduced when the seven-day incidence rate was 205, almost a fifth of the current level (although increasing numbers of tests, in part due to current rules, will mean those numbers are not an exact reflection of the true incidence).

The current rise in cases is likely down to a combination of factors: the seasonal and behavioural changes that drove last autumn’s wave, declining immunity of those vaccinated as well as Austria’s low vaccination rate, with one in three of the population not fully jabbed.

In recent weeks, national and regional measures have been announced aimed at addressing what Schallenberg called the “shameful” vaccination rate, ranging from a lottery in Upper Austria where vaccinated citizens can enter to win prizes, to the rollout of 2G rules which effectively ban the unvaccinated from parts of society.

The lockdown for the unvaccinated prompted a surge in vaccine take-up, and Austria has also focused on rolling out booster doses, making these available two months earlier in Vienna and Salzburg.

But with such a rapid rise in cases, vaccination will build up the level of protection in the population but cannot on its own curb the current wave.

“Higher vaccination rates definitely need to be achieved, but there is a delay of a few weeks before they can become effective,” said Neuwirth.

When asked if he had any estimate of when the situation might begin to improve, Neuwirth said: “At the moment, the situation is quite unstable, therefore predictions seem impossible.”