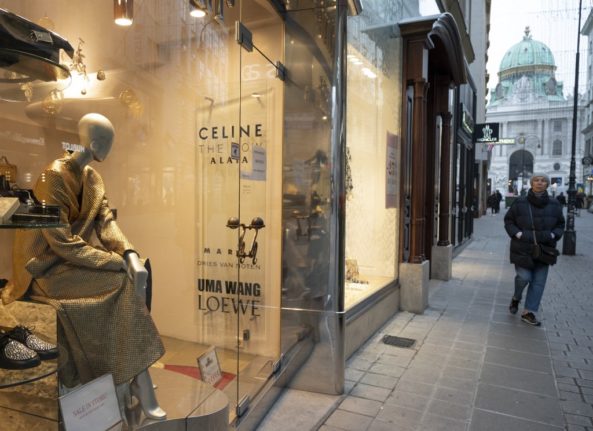 A woman walks past a closed boutique store on the Graben, a shopping street in the city centre of Vienna. Prices on goods and services have risen in Austria. (Photo by JOE KLAMAR / AFP)

Austrian finance minister Magnus Brunner (ÖVP) on Wednesday presented his first annual budget to the country’s parliament, as he tried to get the message across that the finance measures weren’t all crisis-related.

It wasn’t an easy sell, given billions of euros have been earmarked and are still being spent on corona aid packages and anti-inflation measures.

Still, Brunner said the country would be “using the current challenges to set priorities” as he laid out plans involving increasing the military budget and investing in “social and economic security”.

READ ALSO: Milk, cheese and eggs by 19.5 percent: How food prices in Austria are rising

Overall, Austria will see its debt growing to € 367bn, but the government debt share of the country’s gross domestic product will fall slightly from 78.3 to 76.7 percent.

The country will also have to deal with interest payments doubling in 2023 as rates soar. However, the federal government’s net administrative finance balance amounts to a deficit of € 17bn in 2023 – an improvement of € 6.1bn compared to 2022.

The procurement of the strategic gas reserve, short-term inflation relief measures and measures to deal with the Covid-19 crisis have weighed heavily on the 2022 budget, the document presented by the Ministry of Finance said.

But what does this mean to the population and Austria’s expenditure in the coming years?

The finance minister said several times that the budget wouldn’t be “purely a crisis budget”. Instead, he presented three priorities: the first was crisis management, but also investments in security and “ecological transformation of the economy”, with efforts to reduce (energy) dependency.

“The government is spending a lot of money to support industry in its ecological transformation and is investing in security, both military and economic, as well as in the security of supply”, Brunner said.

The “economic transformation” will be supported with €863 million in the coming year and a total of €5 billion by 2026. 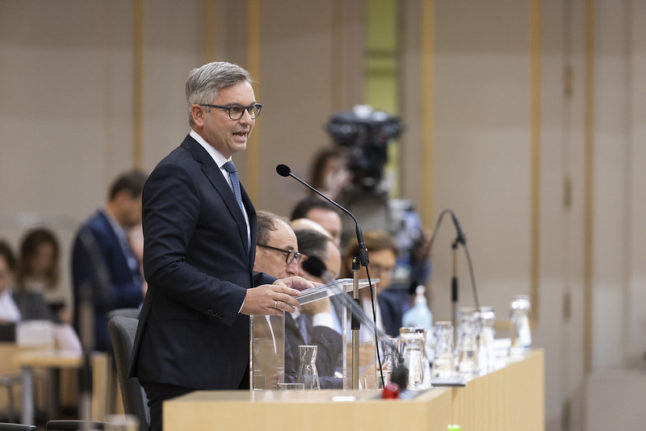 From January to September, inflation in Austria more than doubled from 5 percent to 10.5 percent, the minister said.

Brunner stated this was a threat to the prosperity and growth of the past few years. Therefore, in 2022, measures against inflation amounting to €6.3 billion were implemented, explained the finance minister.

According to him, further relief measures totalling €30 billion are planned for the next few years – up to 2026. “It is important that citizens and companies can rely on the state”, he said.

The Social Affairs and Health Ministry will receive an extra €1 billion to its budget in the coming year, with minister Johannes Rauch setting the fight against poverty, care and health promotion as priorities, according to a press statement.

“In the coming year, we will implement measures that other social affairs ministers have been fighting for decades: Social benefits will increase yearly in the future. For the first time, the compensatory allowance and social assistance are increasing faster than pensions”, he said.

Rauch also specified that the money would be used “where it is currently most urgent”. He mentioned the combat of poverty, cushioning the consequences of the pandemic and counteracting the shortage of nursing staff.

The minimum pension in Austria will be increased by a fixed amount of € 20 per month, according to the Social Affairs Ministry.

The 2023 budget also sets an important focus for people with disabilities: an additional €80 million are earmarked for improving social and professional participation, it added.

READ ALSO: What the Austrian government’s new pension package means for you

The minister also said health promotion and preventive care would receive €27 million next year, with most of it going towards vaccination programs. Still, some are going towards digitisation projects in the healthcare sector. For example, there is a plan for digitising the Mutter-Kind-Pass, the “mother child passport”, an essential document for those having babies in Austria.

The budget for art and culture is also increasing by 11.3 percent compared to last year.

“Art and culture are the cornerstones of our society and must be preserved in all their diversity with strong public funding, even in difficult times,” said State Secretary Andrea Mayer in a press statement.

The most significant part of the budget increase, € 37.5 million, is dedicated to fighting the wave of inflation, the State Secretary for Art and Culture said. Of this, €22 million will flow into a renewed increase in the basic payments to the federal theatres and federal museums.

The remaining €15.5 million are available for funding adjustments in the area of ​​art funding.