When will Austria make the €500 anti-inflation payment and how do I get it?

People in Austria have faced a rising cost of living but will now receive a €500 anti-inflation payment to compensate for it. Here's what you need to know about how to get it.

Austria has recorded rising inflation and as economists believe the country will have double-digit inflation in the coming months, the federal government scrambles to find solutions to cushion the impact on the public.

In July, the inflation rate was already at 9.2 percent due to an ongoing increase in energy prices. To counter or at least cushion the effects of the rising cost of living (especially since essential items have soared in price), the Austrian federal government unveiled a €6 billion package with financial measures and several social payments, as The Local reported.

READ ALSO: Why (and when) double-digit inflation is set to hit Austria

The most significant one-off payment will be a €500 "climate and anti-inflation bonus" (the Klima- und Antiteuerungsbonus), which the government announced would be paid out to millions of people in Austria in October. However it has since decided to bring forward the payments to September.

What is the Klimabonus payment?

The bonus payment is actually two bonuses together. One, totalling €250, is the "climate bonus"(Klimabonus). The other, also €250, is the "anti-inflation bonus" (Anti-Teuerungsbonus).

The climate bonus is part of Austria's "ecosocial tax reform", a set of measures destined to promote climate protection. One of them is a tax on CO2, which will be offset by the climate bonus for Austrian residents.

It's not a simple measure. On October 1st, a new CO2 tax will come into force in Austria in the hope of cutting emissions?

Consumers, especially motorists, will feel it because the tax will result in an increase in fuel prices.

However, the money raised with this tax will be reverted to Austrians via the so-called Klimabonus. The idea is that the more you use public transport, the more of the bonus you will have "left" by the end of the month.

In 2022, the climate bonus will be €250 for all people in Austria (more on this below) to account for rising inflation. However, in the coming years, the yearly bonus amount will depend on where in Austria you live.

According to the government, those living in well-connected cities with plenty of options for public transport (people who, therefore, could easily choose more eco-friendly transportation instead of a car) will receive less money. For example, in Vienna, the payment will be €100.

The anti-inflation bonus is a one-off payment taking place only in 2022 to cushion the rising cost of living effects on people living in Austria. It will be paid out together with the Klimabonus, totalling €500.

Parents or guardians will also receive €250 for every child or adolescent in their care.

Who will receive the bonus?

Everyone in Austria who has had their primary residence in the country for at least 183 days in the respective year is entitled to receive the payment. It doesn't matter how old you are (though underage people receive less money), whether or not you are employed or your citizenship.

Children and teens up to 18 years old qualify for the €250 payment as long as they have lived in Austria for at least 183 days in the year when the bonus is paid. That includes babies, but those born by the end of the year and, therefore, without main residence in Austria for 183 days, will not be entitled to the payment. The bonus will be paid to their parents or guardians. 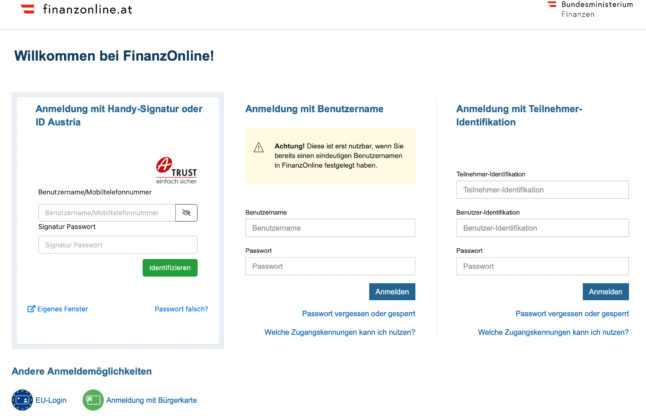 The FinanzOnline is Austria's official site for financial matters, including the bonus payments (site: finanzonline.bmf.gv.at/)

How do I receive the bonus?

The climate and anti-inflation bonus is automatic so there's no need to apply as such. There are two ways to get it, though.

The first one is via a transfer to your account. If you have your bank details registered with FinanzOnline, the official site for the finance authority in Austria, this is the one they will use, as it is shared with the federal government.

If you receive family allowance benefits for your children, their bonus payment will be made to that same account.

You can also check on FinanzOnline whether your account details are up to date and change them for next year - since the climate bonus, unlike the anti-inflation bonus, will be paid out yearly.

READ ALSO: EXPLAINED: What is Austria’s Handy-Signatur and how does it work?

If you don't have an account registered with the financial authorities, you get a voucher via secure mail, the so-called "RSa-Brief", which can only be delivered to you in person. You can then exchange the voucher for cash in several branches of the bank99 and other spots that the government has not announced yet.

When will I get the bonus?

The climate bonus will be paid from the beginning of September and those who entered their bank details to FinanzOnline should expect to get it in their accounts in September or October 2022.

You can check more information on the government website.