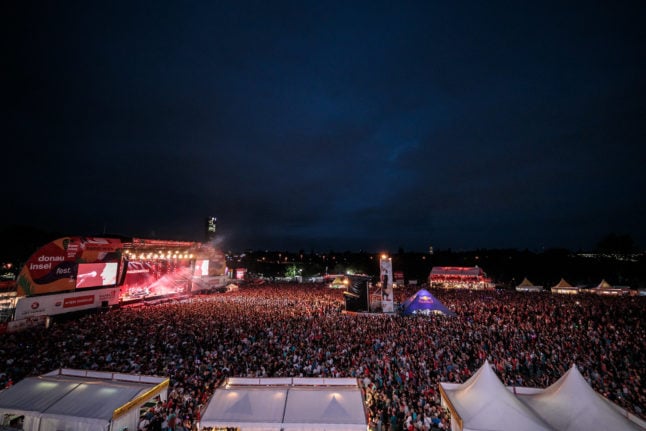 It took two years, but Austria is now bringing back most of its major summer events without any pandemic restrictions. The country has already hosted a 250,000 people Pride parade (the Regenbodenparade) and a days-long festival, the Nova Rock festival, to the joy of many.

With summer coming up, there are several more events you shouldn’t miss. Here’s an overview of some of the best events for summer in Austria in 2022.

This is Europe’s largest – and free – open-air music festival. It takes place on Danube Island (Donauinsel) in the Danube River in Vienna.

Performers at the festival are usually Austrian, but there are also sometimes international acts in the line-up. In the past two years, Donauinselfest has gone ahead in a smaller capacity to comply with Covid-19 restrictions.

However, the festival is back this year with no restrictions and several stages. The official festival website can be found here.

Ten days of water sports will leave nothing to be desired. In Graz, you can participate in rafting, sailing, standup paddling (plus yoga, HIIT, and pilates on the surfboard), and all sorts of activities and sports can be found during this event.

You can read more and find the complete program here.

Mid Europe is a music festival for wind and brass instruments in Schladming in Styria. The event is known for fostering a love of music and culture where musicians play out of choice instead of being paid to perform.

Every year 35 orchestras from 15 countries descend on Schladming, with events (24 in-door and 15 open-air) taking place across the Schladming-Dachstein region. Music genres include traditional Bohemian, classical, swing and ska. Event details can be found here.

Electronic music fans can dance the night away just over the mountains, as the festival is located in the Seegrube, just above Innsbruck. Part of its charm is being able to party and camp in the mountains, almost 2,000 metres above sea level.

You can read more about the festival on the official site.

READ ALSO: EXPLAINED: Everything you need to know about camping in Austria

The 76th Begrenz Festival will officially open after a two-year Covid break. Around 1,800 guests are expected at the opening in the Festspielhaus, where the Wiener Symphoniker will play under the direction of conductor Enrique Mazola.

The festival takes place in the lovely town of Kirchdorf an der Krems, and is a great way to get to know more local rock music, including Austrian band Granada and German rapper Fiva.

The smaller festival lasts for three days and the pass (without camping or caravan parking) costs € 67. There are also different stages with rock/pop, techno, and activities for children. You can read more about it here.

FM4 is one of Austria’s national radio stations, popular with the country’s young and multicultural population. The annual Frequency Festival is a showcase of the music played on FM4.

READ ALSO: Heatwave: Nine of the coolest places in Austria

The Salzburg Summer Festival offers a programme of opera, drama and concert performances and takes place across several weeks during the peak summer season.

It’s an important event on the city’s cultural calendar and celebrates Salzburg’s history. The entire programme can be found here.

Open-air cinemas all over Austria

Many cities in Austria offer open-air cinemas during the summer months and the one in Klagenfurt, Carinthia, located in the beautiful Burghof, is worth visiting. It takes place between July 16th and August 25th. You can check the programme here.

In Burgenland, the Kino am Neusiedler See is a popular choice, set by the shores of “Austria’s sea” from August 4th to 7th. Check out more info here.

In Lower Austria, Cinema Paradiso is one of the prettiest options, just outside the Rathaus of St. Pölten. There are many offers other than traditional films so you can watch live events or concerts. Read more here.

Upper Austria might have the most unusual open-air cinema of all, the Whirlpool-Kno in Feldkirchen an der Donau. Who wouldn’t want to watch a movie while bathing in a whirlpool? Tickets are pricey, though, and you can read all about it here.

Vienna has many open-air cinemas, and the most popular is the film festival in the Rathausplatz, where there are many other activities, and food offers too. The Kino am Dach is also a good choice for a great view of Vienna. 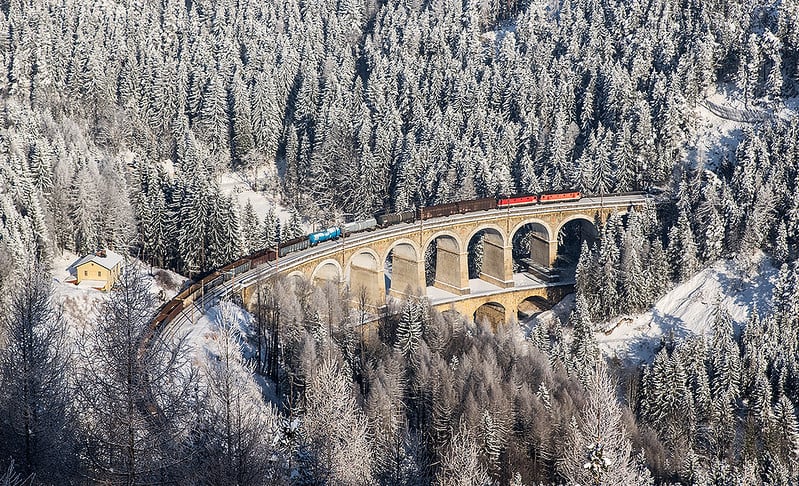 You’ll get epic views whether you travel in summer or winter, but the snow adds to the romanticism. Photo by Miroslav Volek on flickr.

Semmering Railway
Built between 1848 and 1854, the 41-kilometre-long Semmerling line was made a UNESCO World Cultural Heritage site in 1998 and it’s easy to see why: it runs through some jaw-droppingly beautiful scenery between the mountain towns of Semmering and Gloggnitz. It was a huge technical achievement for its time, not least because of the hefty gradient of the line. It was also the first European mountain railway to have a standard gauge track.

You’ll see glorious mountains, obviously, plus huge viaducts – 16 of them, if you’re counting – and 15 tunnels, including one whopping 1,430-metre-long one, and over 100 bridges, as well as plenty of lush forests and deep valleys. 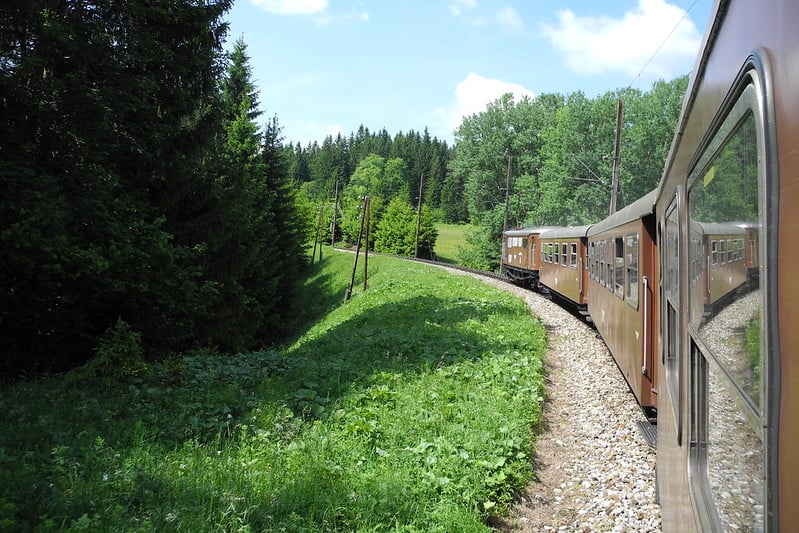 Clear skies are made for scenic train rides. Photo by flightlog on Flickr

Mariazell Railway
Remember we mentioned gauges above? Well, the Mariazell Railway is a narrow-gauge route – built like that because it was a difficult terrain for trains to cross. Running from St Pölten in Lower Austria to Mariazell in Styria, at 84km-long, it’s Austria’s longest narrow-gauge line.

The mountain section (Bergstrecke) of the line is the most picturesque. Get on at Laubenbachmühle where this starts and enjoy the train’s climb to its peak of 892m above sea level in Gösing where you’ll have gorgeous panoramic views and a glimpse of the 1,893-metre-high Ötscher mountain. Stay on board to see viaducts, reservoirs and deep gorges, in particular glimpses of the wild Erlauf gorge.

Want to really make the most of those views? Book a panorama carriage, which gives you super-comfy seats and unobstructed views of the scenery unfolding as the train trundles along. 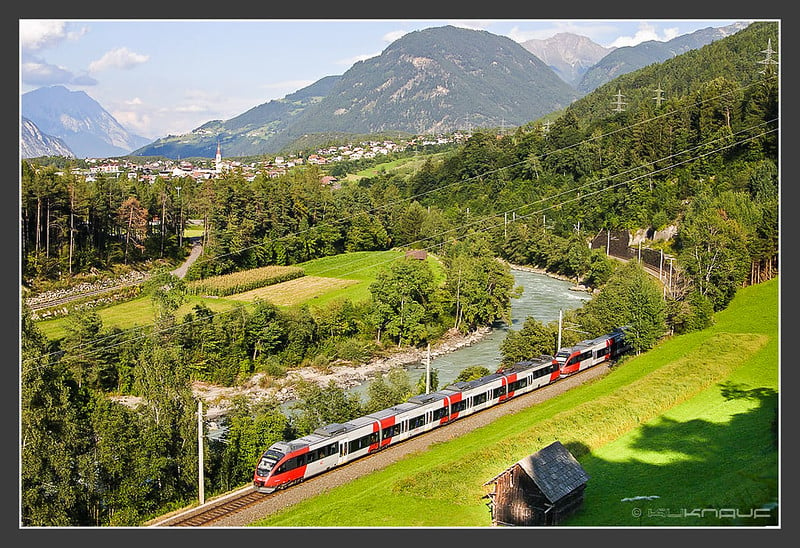 The Arlberg raiway is one of Europe’s highest – it climbs to 1,310 metres above sea level at its highest point. It goes up at a fair tilt, too and is one of the steepest passenger lines out there.

Connecting Innsbruck and Bludenz (on the Swiss border), it’s the only east-west mountain line in Austria. Visual delights include the Tyrolean Trisanna Bridge near the hilltop castle Wiesberg, snow-peaked mountains, the 6.6-mile-long Arlberg tunnel, and verdant valleys and forests at the Arlsberg pass  – go at sunset/sunrise and look to your right for the best views.

There are – unsurprisingly – a lot of steep railways in Austria and this one is no exception. This is the steepest steam cog-railway in the country and has been running between St Wolfgang in Salzkammergut up to the 1,783-metre Schafberg mountain since 1893.

It’s a gorgeous journey up the mountain with the views getting better and better the higher you go. At the top, you’ll have (weather-permitting) clear views over Salzkammergut’s glittering lakes, as well as the soaring peaks of neighbouring mountain ranges, such as the Höllengebirge.

Tauern Railway
If you’re heading to Venice by train, then this is the most scenic route to take and it’s worth the trip in its own right, too. You’ll pass stunning valleys and gorges as the line winds its way up the High Tauern mountain range of the Central Eastern Alps.

The best views are on the right-hand side of the train when you’re heading in this direction, so try to get a window seat if you can. 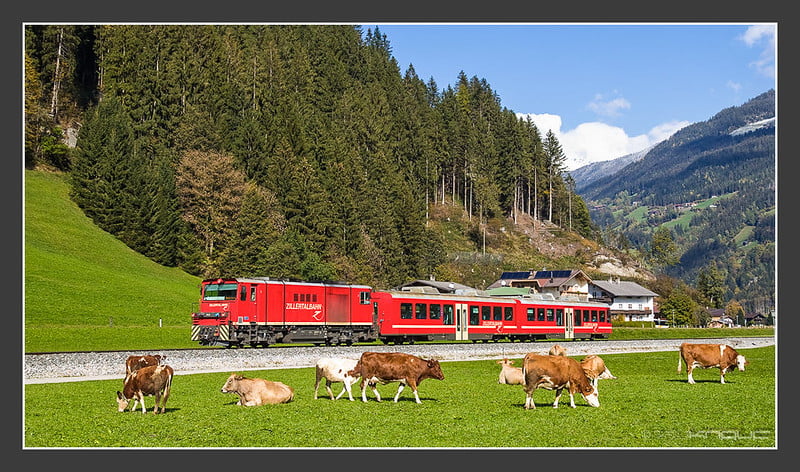 Are you even in Austria if your train doesn’t pass a field of cows? Photo by Schnitzel_bank on Flickr.

Zillertal Railway
There’s always something rather romantic about travelling by steam train and the traditional Zillertal locomotive with its wooden carriages is no exception. It putters gently by the side of the Ziller river along the 32-kilometre stretch between the towns of Jenbach and Mayrhofen, giving you ample opportunity to take in the views as you pass picture-perfect villages and gorgeous valleys surrounded by mountains.

If you’ve got your heart set on the romanticism of steam trains, make sure you check which train you’re getting as the steam-powered engine doesn’t run as frequently as the faster diesel one. If you haven’t pre-booked, get there early to make sure you get a seat as it can get very busy.
zillerbahn.at 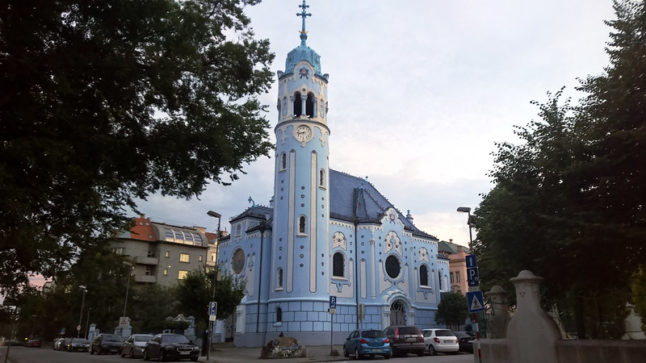