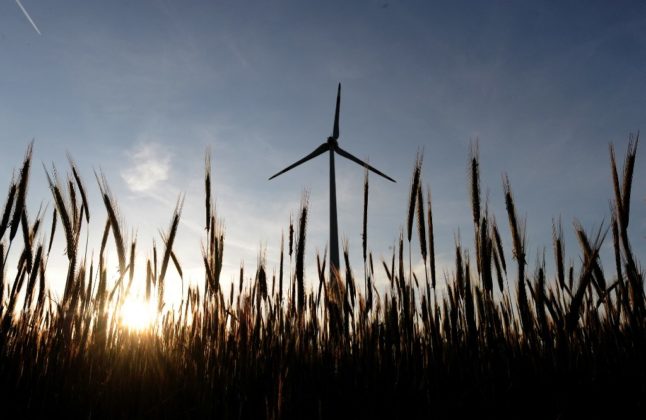 Austria is trying to move to using mainly renewable energy, such as wind energy, but it 'won't happen overnight' according to the Chancellor. (Photo by Joe KLAMAR / AFP)

The validity of the “Green Passport” will be extended. Health Minister Johannes Rauch (Greens) announced on the broadcaster ORF “Report” on Tuesday that the extension would be in place by the beginning of next week at the latest.

He made assurances that Austrians’ Easter holidays would not be affected by  an expiring green pass, which shows proof of a Covid-19 vaccination or recovery from the disease. He also said the current reduced testing regime will last until autumn.

READ MORE: Why are the numbers of fully-vaccinated people going down in Austria?

The EU tightened its sanctions against Russia again on Wednesday. It is believed to  have proposed a ban on coal imports, an insider told the Reuters news agency. Wood, cement, rubber, chemicals and luxury foods and drinks such as caviar and vodka are also to be included in the sanctions list.

The export of semiconductors, high-tech machines, certain liquid gas technology and other equipment is to be banned. Russian ships and trucks should not be allowed to enter EU countries.

While Austria and Germany have spoken against a gas or oil embargo, several German and Austrian economists have repeatedly spoken out in favour of stopping Russian oil imports in recent weeks.

The boss of Wifo (the Austrian Institute of Economic Research) Gabriel Felbermayr supports this plan, the Wiener Zeitung newspaper reports.

Unlike gas, only ten percent of domestic oil imports come from Russia. Almost half of the oil consumed in Austria comes from Kazakhstan and Iraq. Oil exports make up around a third of Russian exports, compared to gas, which is only seven percent. In theory, an oil embargo would hit Russia’s economy harder than gas sanctions.

The Vienna Institute for International Economic Comparisons (wiiw) expects the Russian economy to shrink by between seven and 15 percent this year, while inflation in Russia could rise to 30 percent.

Chancellor Karl Nehammer (ÖVP) has described an active import ban on Russian natural gas as “unrealistic” at a crisis cabinet meeting in the Federal Ministry of Defence on Tuesday. Austria is trying to diversify its gas imports and create more sustainable energy production. “Unfortunately, that doesn’t happen overnight,” he told the meeting, broadcaster ORF reports.

Austria does not plan to expel Russian diplomats

Despite many other EU countries expelling Russian diplomats, Austria’s Foreign Minister Alexander Schallenberg does not want to follow suit. He told the ORF Zib 2 programme that he found it “regrettable” that each state was acting individually, rather than in co-ordination with each other.

He said expelling Russian diplomats would lead to Austrian diplomats being expelled from Russia. However, he said he would “reserve the right to expel diplomats,” and criticised the Russian embassy in Vienna as a “propaganda machine.” He also said there could be no return to Austria’s previous relationship with Vladimir Putin, stating “We all misjudged him.”

The opposition SPÖ leader Pamela Rendi-Wagner criticised the government for allowing benchmark rents on Altbau apartments and buildings to rise, as inflation hits almost seven percent in Austria, at a special meeting of the National Council on Tuesday. She said the rent increases would force inflation even higher.

She argued people were starting to have to choose between eating or heating due to rising energy and food prices, while energy companies made big profits and the Ministry of Finance received VAT revenues on electricity and gas.

The SPÖ leader also criticised the recent warning by Finance Minister Magnus Brunner (ÖVP) that unions had to hold back on wage rounds in order to prevent a spiral of wage savings.

50,000 refugees from Ukraine now registered in Austria, including 5,000 schoolchildren

So far around 50,000 refugees from Ukraine are registered in Austria, most of them women and children. Around 5,000 children and young people who have fled Ukraine are now enrolled in the schools.

The largest number of Ukrainian students are in Vienna (around 1,300) and Lower Austria (around 1,400), followed by Styria and Upper Austria (around 500 each), Tyrol (around 400), Carinthia, Salzburg and Burgenland (around 300) and Vorarlberg (around 100), broadcaster ORF reports.

A river cruise ship in Vienna which was stranded in front of the marina in Döbling for two years after its operator went bankrupt during the Covid-19 pandemic has finally been taken away. The ship left Vienna on Monday evening, broadcaster ORF reports.

Later on Monday, Kneissl announced her resignation – although it is unclear what impact this will have on the sanctions process.

Austrian media reports the rule includes an annual salary of 515,000 euros. The EU Commission could include her on the sanctions list, which could soon mean her assets are frozen and her bank accounts are blocked.

Former German Chancellor Gerhard Schröder has left his position with the firm after sanctions were threatened.

Note: this story was updated on Monday afternoon after Kneissl quit her board position at Russian oil giant Rosneft.