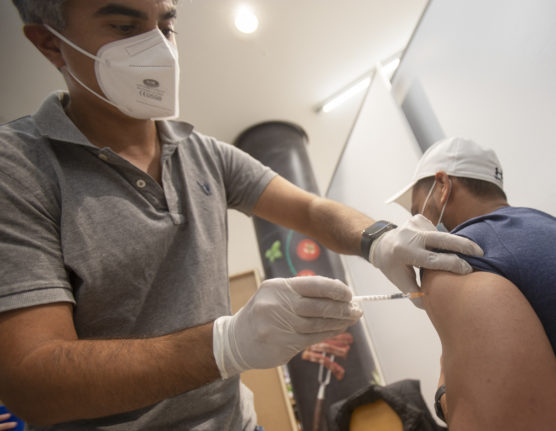 A man is vaccinated at a vaccination station installed at a BILLA Plus (REWE Group) supermarket in Vienna on August 25, 2021 during the coronavirus (COVID-19) pandemic. (Photo by ALEX HALADA / AFP)

Vienna continues to operate under stricter rules with proof of 2G (vaccinated or recovered) required to enter cafes, bars and restaurants.

Masks are mandatory for all closed indoor public spaces, means of transport, throughout trade, for physical services, in gastronomy (but not while sitting), in hotels, sports facilities, in cultural and leisure facilities, at places of work, in retirement and nursing homes and in hospitals.

A mask must be worn when entering a workplace if the risk of catching Covid-19 is not minimised by other protective measures. The mask mandate does not apply to people that work alone but it does apply to indoor meetings of more than 100 people unless everyone can provide proof of 3G – same rules for nightclubs.

Rauch stated that the relaxation of measures announced earlier in the month were taken based on case numbers falling, but that scenario has not come about. Additionally, the situation in hospitals is “worrying”, the minister said.

Therefore, the federal government decided to take steps to protect the critical infrastructure in the health and care sector, with a quarantine obligation eased to ensure staff continue operating in hospitals and nursing homes.

Nothing will change regarding the test system, which introduces a monthly limit of 5 PCR tests and 5 antigen tests for residents. However, there is now an official government recommendation to work from home wherever possible.

READ ALSO: ‘The pandemic has not been mastered’: Vienna to tighten Covid measures

He added that the experts expect the infection numbers to increase for at least two weeks, with more than 50,000 new cases per day.

On Friday, Austria recorded 51,112 new coronavirus cases, according to the Health Ministry. More than 3,000 people are hospitalised with the virus, and 207 patients are in intensive care. Austria still has one of  the lowest vaccination rates in Western Europe, as fewer than 70 percent of the population are fully vaccinated.

“Only the vaccine prevents a complete collapse in the health sector”, Rauch said, asking people to continue taking the vaccine and supporting the third dose. In addition, he announced there would be a new vaccination campaign throughout the country.

Rauch admitted that the easing of measures on March 5th was “too early and too far-reaching”. Last month, the federal government announced the end of most Covid restrictions in the alpine country, including dropping the 3G and 2G rules (vaccinated, recovered, or tested) for entry into most places.

At the same time, it suspended a vaccine mandate as it was set to start checking and giving fines for unvaccinated people by mid-March.

The relaxation of measures was widely criticised in Austria. The capital Vienna announced it would not follow the reopening steps, keeping a 2G rule in gastronomy and the indoor mask mandate.

During a press conference, the health minister confirmed resignations within the expert corona commission, the so-called GECKO. There had been several rumours in Austrian media that some members were unhappy with the relaxations.

The minister said the head of Austria’s Red Cross, Gerry Foitik, resigned his position this Friday. Rauch apologised to the experts that felt like they had not been heard through the process.

Please note: A version of this article previously stated that venues like bars and restaurants would be able to decide either to have masks or 3G rules, which was incorrect. This has been updated. As at April 8th, 2022, only gatherings of over 100 people without seats are permitted to make this choice.