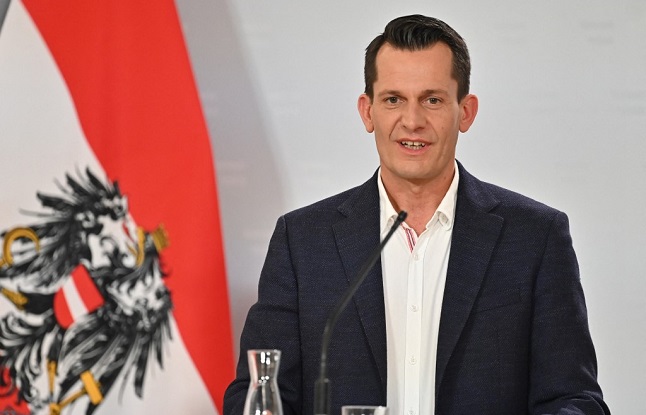 Austrian Health Minister Wolfgang Mückstein has resigned, saying he could no longer give 100 percent. (Photo by JOE KLAMAR / AFP)

Austria’s Health Minister, Wolfgang Mückstein (Greens), on Thursday announced his resignation from the job, just 11 months after taking over.

He will be replaced by Vorarlberg state councillor Johannes Rauch from the same party, ORF reports.

Mückstein said that the job could only be done when one could give 100 per cent, which he hasn’t been able to do anymore.

He mentioned that managing the pandemic is a “big responsibility” and that not all were happy with his decisions. In addition, Mückstein said the threats he and his family have received from Covid sceptics were “extremely burdensome”.

“No one can stand that for long”, Mückstein declared, mentioning the stress caused by needing police protection outside of his apartment at all times.

Second resignation in less than a year

This is not the first time an Austrian health minister has resigned during the pandemic.

Mückstein’s predecessor, Rudolf Anschober, resigned last April, citing the toll working in the ministry during a pandemic. “15 months has felt like 15 years“, Anschober said at the time.

Last April, Austria was in the early weeks of a vaccination campaign that would prove a challenge on its own. The country had more than 9,700 deaths recorded and had been through controversial lockdowns that were among the strictest in Europe.

Anschober’s successor Mückstein oversaw the vaccination campaign, which has taken the country to a better position despite the pandemic not being over yet, he said.

But the months that followed also brought new challenges of vaccine hesitancy, the vaccine mandate law and weekly protests against the government and its measures.

Austria now has almost 15,000 recorded deaths. Less than 70 percent of its population is fully vaccinated, one of the lowest rates in Western Europe.

This month, the country, except for the capital Vienna, is set to drop all entry requirements for restaurants and life in general, allowing people to participate in social events and enter places without showing proof that they are vaccinated, recovered or tested, the 3G rule.

However, the announcement was criticised by some specialists, who claimed opening measures were coming too soon while Austria still averages more than 25,000 new Covid-19 cases per day.

During his speech, however, Mückstein didn’t mention the reopening steps or criticism, instead highlighting that his only goal was to protect lives and the health structure in Austria.

New minister to be Johannes Rauch

Yesterday, the vice-chancellor said he would propose Rauch as the most suitable successor to the Green party. The politician’s inauguration is expected to take place early next week.

While Mückstein is a doctor and is expected to resume work in the field, Rauch is a career politician who was the Green spokesman in Vorarlberg for over 20 years and party representative (Klubobmann) for ten.