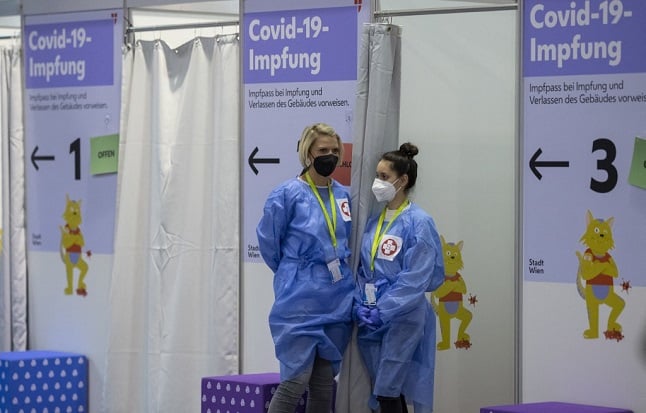 “After consultations with the health minister, we have decided that we will of course follow what the (expert) commission has said — we will suspend mandatory vaccination,” minister Karoline Edtstadler told reporters after a Cabinet meeting.

The burden on fundamental rights is not “necessary” at the moment, she added.

The decision was taken after evaluation of a report by Impfpflichtkommission, a special commission set up to determine whether Austria’s law mandating its residents be vaccinated against Covid-19 is necessary and legally justifiable.

The law will be “put on hold”, the minister together with Austria’s new Health Minister Johannes Rauch (Greens) announced.

Though the rules do not apply, they want the flexibility to be able to react to any situation and the provisions could be reactivated if deemed necessary, the ministers said.

Austria’s vaccination law entered into force on 5 February.
Still, it had been only in the first stage, with residents receiving informational letters on vaccines against Covid and the law itself.
Currently, the alpine country has one of the lowest vaccination rates in Western Europe, with just under 70 per cent of its people fully vaccinated. Austria has averaged 4,557 vaccines per day in the last seven days, most of them given as a third-dose or booster shot.

However, the situation in hospitals has not been as alarming as in previous waves of the pandemic, the authorities have said. The number of people treated in intensive care is currently at 195.

Besides that, they mentioned the development of medications against Covid and the fact that, despite lower rates compared with other countries, most of the population is vaccinated.

The course of the omicron variant, deemed more contagious but less deadly, was also a factor, Edstadler said, but the authorities “would remain flexible and adaptable, just as the virus”, she added.

The ministers stated that the health and pandemic commission would evaluate the epidemiological situation every three months to determine if the circumstances have changed.

The ministers reiterated that the possibility of suspending the law had been in the legal text already. Now, the Health Ministry needs to issue a decree halting the second phase of the compulsory law. Minister Edstadler confirmed the next steps would be taken soon.

The second stage of the law was set to start in mid-March, when unvaccinated people could be fined during routine checks, such as traffic controls. Fines would start at €600 and reach as much as €3,600 per year.

Austria was one of the first countries to announce such a mandate.

It had sparked controversy, with vaccine-sceptic groups and right-wing parties organising weekly protests in the capital Vienna. Since coming into force, in early February, the vaccination rates had not even increased by 0.5 percent.

A third phase of the vaccination mandate included automatic checks through Austria’s federal vaccination registry, a highly controversial move that didn’t have a set date to begin and now looks even more unlikely to take place.

Regardless, the Minister of Health Rauch kept the appeal for people to get vaccinated and stated that a new variant could appear in autumn.

“We don’t know how the virus will continue to behave”, he said.