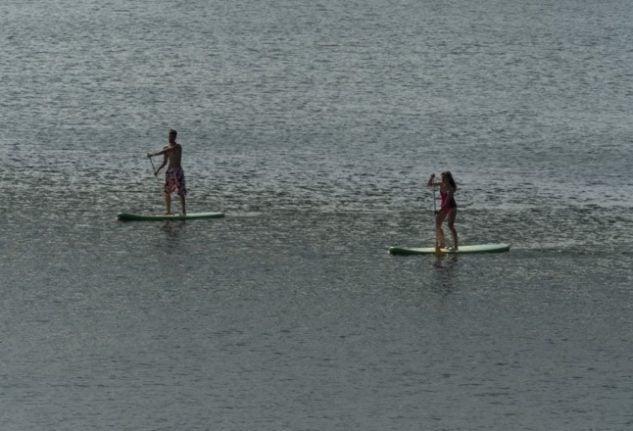 People use stand up paddle (SUP) on the Old Danube (Alte Donau), a subsidiary of the Danube river, in Vienna, Austria.(Photo by JOE KLAMAR / AFP)

Stricter Covid-19 pandemic measures have come into force in  East Tyrol due to the high number of infections. The measures started today (Wednesday) and will be in place up to and including August 24th.

As The Local reported on Tuesday, people must show a negative Covid-19 test or proof of recovery or  vaccination  to leave the “high incidence communities” of Innervillgraten and Oberlienz.

In addition, events of 100 people or more have been officially prohibited in the entire Lienz district until September 1, and  in Innervillgraten and Oberlienz for 50 people or more. An FFP2 mask requirement has also been reintroduced for events and in retail for east Tyrol.

It is believed the high number of infections have been driven by travel and people not wishing to be vaccinated, Der Standard newspaper reports.

Austria’s Health Minister Wolfgang Mückstein has said booster shots of Covid-19 vaccines will start on October 17th, however, for certain risk groups this could be even sooner, according to Der Standard newspaper.

Austria’s Ministry of the Interior is increasing the number of border security officers in Burgenland.

The number of soldiers has recently increased from 600 to 1,000 and 27 police officers from the federal states of Styria, Carinthia, Upper Austria and Salzburg stepped up the deployment on the Burgenland border, according to Interior Minister Karl Nehammer (ÖVP).

It is hoped the measures in Burgenland will combat people smugglers in order to make the routes unattractive, broadcaster ORF reports.

Newspapers have focused on the controversial appointment of Roland Weißmann as general director of the broadcasting corporation ORF. The ÖVP party, which governs Austria in coalition with the Greens, had backed the appointment according to Die Presse newspaper.

The article comments that “politicians are unabashedly governing their company [ORF] by appointing the new boss”. The opposition SPÖ party’s General Secretary Christian Deutsch,  said: “The media tamers in the Chancellery did a great job and pushed through the appointment of Chancellor Kurz’s preferred candidate” according to Austria’s APA press agency.

The seven day incidence is 43.3

Three swimming lakes in the Salzburg region are still closed following flooding in mid-July which affected the water quality. It is unclear when the lakes will be able to reopen, broadcaster ORF reports. The quality of the water in the lakes has been affected by the Salzach River flooding.

People who normally use the lake have been advised to go to the Mitersall outdoor swimming pool instead.

Danube is in good condition, according to report

The Danube River is in good ecological condition according to scientists who analysed the river in the 14 countries it flows through in 2019 and 2020. In Lower Austria, samples were taken in Klosterneuburg (Tulln district) and Hainburg (Bruck an der Leitha district), broadcaster ORF reports.