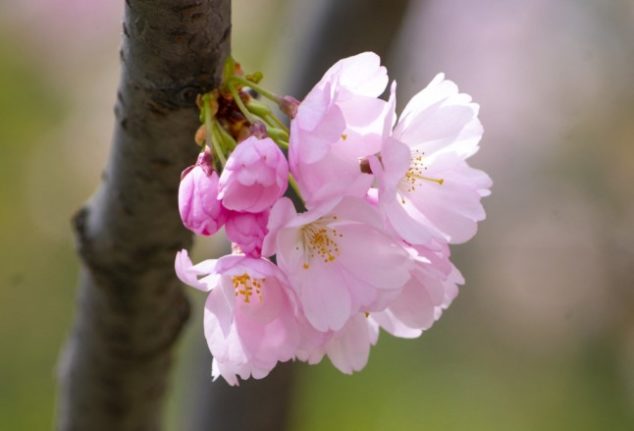 Some blossoms are starting to appear in Austria as the weather stays sunny and warmer. (Photo by JOE KLAMAR / AFP)

Compulsory Covid-19 vaccination could be still be necessary by autumn, experts say

Austria’s new compulsory vaccination law has been put on the back burner – but this may only be temporary.

While experts concluded in Wednesday’s report that during the Omicron wave, compulsory vaccination was “not proportionate”, the report also warned of the possibility of a massive wave of infections in the autumn.

Health Minister Johannes Rauch (Greens) said the committee would meet again and report back to the government in three months, at which time a new decision over compulsory vaccination may be made, broadcaster ORF reports.

High numbers of infections due to easing of Covid-19 measures, says expert

Austria reported 47,795 Covid-19 infections on Wednesday, the highest figure since the pandemic began. The reason for the high number of infections has been the end of lockdown for unvaccinated people, and other relaxations of the rules, according to researcher Peter Klimek, speaking to broadcaster ORF.

Klimak said there was currently a high level of immunity in the Austrian population due to vaccinations and recovery from infections. However, this may not last until autumn. He refused to rule out the need for further lockdowns later in the year.

Many car owners who live in the Austrian state of Burgenland are driving across the Hungarian border to fill up with cheap petrol. Drivers can save up to €40 on 60 litres of petrol by going to Hungary, broadcaster ORF reports.

In November the Hungarian government, led by Prime Minister Viktor Orban, introduced price caps for petrol and diesel, as well as milk, sugar and flour. The move is thought to be influenced by upcoming Parliamentary elections, which will be held on April 3rd in Hungary.

UPDATED: How to save money on fuel costs in Austria

The Austrian Institute of Economic Research (Wifo) boss Gabriel Felbermayr has spoken in an interview with the Oberösterreichische Nachrichten media outlet about the possible impact of sanctions in Russia when Austria is highly reliant on Russian gas.

He said previous sanctions against Russia for its actions in Ukraine have not been entirely effective because Moscow can support the rouble with money from the sale of oil, gas and metals.

Due to the differences in how much individual countries in the EU depend on Russian gas, the focus should be on oil and metals to begin with, he concluded.

A report released in Strasbourg by the European Parliament has named Austria’s former FPÖ Foreign Minister Karin Kneissl as an example of the Kremlin’s influence on the EU.

The Austrian FPÖ or Freedom Party was also named as a political party which had signed cooperation agreements with Putin’s United Russia party and was reportedly willing to receive political funding from Russia.

The politician Harald Vilimsky tweeted about the report with the comment: “So the EU keeps “black lists” of unpopular citizens?” The Kurier newspaper reports the FPÖ declared at the end of last year that it no longer wanted to extend its cooperation agreement with United Russia.

The Austrian delicacy of ​​Styrian pumpkin seed oil is set to become more expensive in the coming months, due to rising energy costs as well as increasing prices for cardboard boxes, wages and freight, according to Franz Labugger, chairman of the Styrian Pumpkin Seed Oil Community, speaking to ORF on Wednesday.