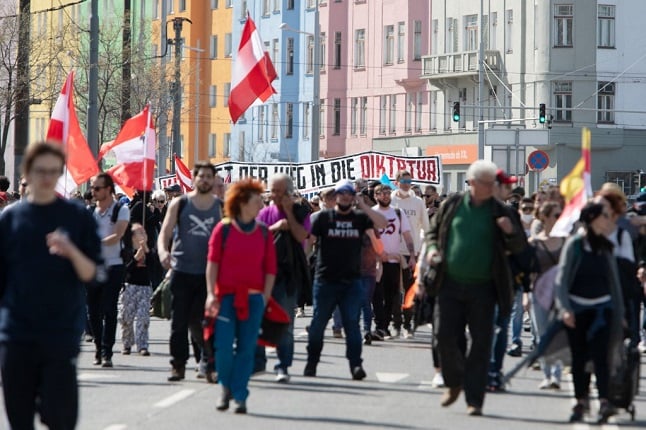 Protestors against Covid-19 measures at an earlier demonstration in Austria. Photo: Alex Halada/AFP

A major demonstration against Austria’s Covid restrictions and the lockdown for unvaccinated people had already been planned for November 20th, and the far-right Freedom Party (FPÖ) stepped up their calls for people to attend. Several thousand protestors are expected to attend each of three protests planned in the capital — around 10,000 people in total.

FPÖ leader Herbert Kickl is unable to attend the rally as he is in quarantine after testing positive for Covid-19. Reacting to Friday’s announcement, he said Austria was now a “dictatorship”.

Chancellor Alexander Schallenberg directly linked Kickl’s anti-vaccine stance to the country’s low vaccination rate and the need to take harsh measures, saying spreading misinformation about vaccines was “an attack on our healthcare system”.

READ ALSO: Follow the latest Covid-19 developments as they happen

Both acknowledged that this was a measure they had hoped to avoid and that they knew would be unpopular, with Ludwig saying: “We can take the criticism, because this is about saving lives.”

He added that he could have “made it easy” for himself by avoiding lockdown in Vienna, due to the comparatively lower incidence rate, but said the nationwide situation called for “solidarity”.

Asked about the protests planned in the capital for Saturday, Ludwig said: “I ask the media to spread what science knows, and to counter the absurd ideas [that the Covid vaccines are unsafe].”

The governor of Vorarlberg, Markus Wallner, has said the decision to bring in a general lockdown was “unavoidable”.

“The record numbers of infections that we have now been experienced day after day will be reflected in the normal and intensive care units with a time lag. It is really high time for an emergency break,” Walter Hasibeder, President of the Austrian intensive care representative body ÖGARI, said according to the Kurier.

“From our point of view, there are no alternatives to an even stronger restriction on contacts, therefore all measures are to be welcomed. It’s late, though. It is of course the order of the day that people who have not yet been vaccinated [do so] and those who have already been immunised think of the booster dose in good time.”

Readers of The Local have been getting in touch to share their views, and frustration and anger at the new measures were common sentiments as people talked of their pre-Christmas plans being cancelled (the lockdown is currently expected to last until December 13th).

“I’m vaccinated. I got vaccinated in order to not have my freedom restricted. My freedom is now being restricted because of anti-vaxxers, and my children’s lives put on hold again […] This really isn’t right or fair,” one comment said.

But there were also voices of support for the decision.

“I am completely fine with the requirement for lockdown. The minority of people who are unvaccinated are behaving irresponsibly and thinking ‘my body my choice’ but they don’t seem to understand that their body spreads the virus to other people, even the vaccinated, so they are being selfish by perpetuating the continued spread of the virus,” one reader, Michael in St. Johann im Pongau, told us.

He said: “I think the Austrian government are doing exactly the right thing.”

At the press conference announcing the lockdown, the government said economic measures to support affected businesses would also be extended.

A winter lockdown will hit the tourism and hospitality industries particularly hard, with all non-essential businesses also needing to close and others switching to take-away only.

Rainer Trefelik, head of the Chamber of Commerce, told the APA press agency that the new lockdown was a “historical catastrophe that could have been avoided”.

He said that retailers were experiencing “huge frustration and disappointment”, and needed financial support.

One of the points of confusion in the lockdown is the issue of schools. These will not be officially closed, remaining open to “those who need them” although the government has said parents should keep their children at home if at all possible.

“Political communication is a catastrophe — you hear something different from every side,” said teachers’ union representative Paul Kimberger, speaking to news agency APA. “I have my doubts whether these measures will really reduce the extremely high incidence in schools.”