EXPLAINED: Why Vienna's U2 metro line might take longer to reopen

A significant stretch of the busy U2 metro line has been closed for construction work since May 2021 but was expected to resume operation by autumn 2023. Now, the U2 might be closed for longer.

Vienna is currently building a significant metro expansion in the city, known as the U2xU5 project. With it, two subway projects are being done at once: the U2 is getting an extension to the south and the Austrian capital will finally get its U5 line. Both will meet in the Rathaus, the City Hall station.

It’s a big project that involves several interferences in sensitive areas such as the city centre. In future, as the U2 moves south through Neubaugasse, Pilgramgasse and finally Wienerberg, the new U5 line will absorb stations Vokstheater, Museumsquartier and Karlsplatz and continue towards the northwest part of the city to Hernals.

In the meantime, these three stations are closed and no metro cars have driven through them since June 2021, as works have been carried out to transform them into U5 and connect them to U2 at Rathaus. You can check the project image here: 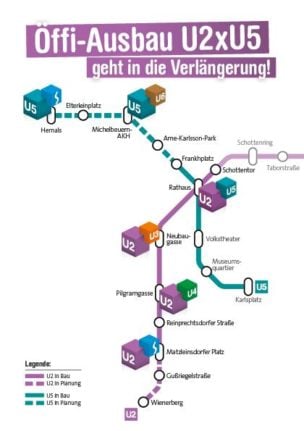 As construction goes on, the section of the existing U2 line between the Rathaus and Karlsplatz stations will be extensively modernised. Since June 2021, the U2 has run only between Seestadt and Schottentor stations, leaving users to seek other (more time-consuming) ways to reach popular parts of the city.

The City of Vienna announced that the stretch would reopen in the fall of 2023, with "subway operations even more reliable".

However, Wiener Linien, the public company responsible for transport services in Vienna, has announced it can no longer guarantee the deadline. Company representatives now say that they will "communicate in good time about the specific opening date".

Despite stating that they "are currently still aiming for autumn 2023", a Wiener Linien spokesperson told The Local that the past two years had brought a "particularly challenging environment".

"In addition to covid-related outages, the ongoing difficult global economic situation and the war in Ukraine are making material procurement more difficult. At present, we are still able to find good solutions together with our contractors in the procurement of materials", they said via email.

In a previous email exchange with a metro user, the company had been more clear, saying they still assumed the U2 would be back on track in autumn, but "we cannot guarantee this".

"A project of this magnitude with five new or rebuilt stations, new line tubes and the renovation, modernisation and reconstruction of the line and stations between City Hall and Karlsplatz always present new challenges, especially in terms of time management", they wrote.

'It takes much longer'

The emails reviewed by The Local were first sent as a reply to an inquiry by Apolinário Passos, who recently moved into an apartment near Shottenring station and was looking forward to the downtown stretch reopening in October.

"I moved in knowing it would reopen in Autumn, but now I'm uneasy about this information that they don't guarantee the date," he told The Local.

"I don't use it to go to work, but more to connect with that part of the city, so full of cultural events. Now, I have to take an alternative route that, unfortunately, takes much longer.

"It was just a small nuisance before, as I was counting the days for Autumn and this would be over with, but knowing that it might take longer gradually makes it more annoying," he added.

So far, Wiener Linien can only confirm that they will "communicate in good time about the specific opening date".