New Year’s Eve is just around the corner and there are many local traditions to try out. Here’s how to celebrate Austrian style and all you need to know about the Silvesterpfad party in Vienna.

Austrians love their traditions and the last night of the year (as well as January 1st) is filled with them. From stocking up on good-luck charms to following along the New Year's Eve Trail in the capital Vienna, there are several ways to enjoy the turn of the year in the Alpine country.

Here are some of the most famous Austrian traditions to celebrate the New Year.

Stock up on these little good-luck charms and trinkets to give to your friends on New Year’s Eve. You may have noticed that the Christmas markets have made way for small stands selling little marzipan or toy pigs, as well as four-leaf clover charms, chimney sweeps, mushrooms, horseshoes and ladybirds.

Pigs, in particular, are considered lucky as they traditionally signify wealth and prosperity – indicating that their owners would never go hungry. 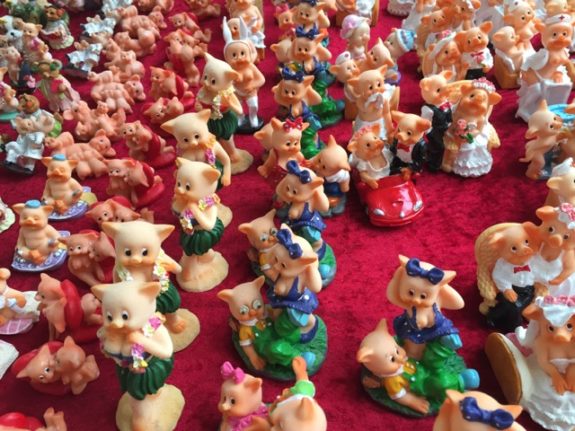 Bleigießen is an Austrian tradition of melting tin to predict what the next year will hold for you.

You can buy the Bleigießen kits at various shops or stands in most cities. You melt the tin in a spoon over a candle or a stove and pour it into a bowl of cold water. The form that the tin makes is used to predict what the future holds for you.

For example, a bubbly surface can refer to money, and a fragile or broken shape could mean misfortune, while ships refer to travelling, keys to career advancement, and a horse points to a new car.

Vienna’s big New Year's Eve party is a huge tradition that was not allowed to happen for the past two years because of the pandemic. However, the Silvesterpfad (something like the New Year's Eve trail) is back in 2022/23.

Around 800,000 people from all over the world come together in downtown Vienna to celebrate the turn of the year. Several venues across the city centre have varied and free shows, music and entertainment programmes, including children's activities.

The stages this year are on the Freyung and Am Hof squares, the Graben, Stephansplatz square, Kärntner Straße and Neuer Markt square - there will be no fireworks this year, though.

Just before midnight, most visitors meet in front of the Stephansdom for the countdown to the sound of the church bells. Then, thousands of people traditionally dance into the new year to the sounds of the Viennese Danube Waltz.

Waltz into the New Year

It's not only in the centre of Vienna that you can waltz to the new year. If you tune into the national broadcaster ORF, it will be playing the Donauwalzer, the traditional song to accompany the first moments of the New Year - all over Austria. So if you find a good dance partner, this is the moment to do a midnight waltz.

Wish your friends a Guten Rutsch before midnight (which translates as “sliding well into the next year”, and a Frohes Neues Jahr after the clock has struck 12. It’s traditional to hug and kiss your fellow party guests and then sit back and enjoy the fireworks displays.