What measures against foreigners is Austria's far-right trying to take?

The Austrian far-right FPÖ party has recently defended two proposals involving a German mandate and job market access in parliament that could severely restrict the rights of foreigners in the country.

Austria's far-right Freedom Party (FPÖ) has been known for its extreme views and background. From its Nazi origins (more on that below) to defending certain rights, including access to specific benefits and social assistance, be kept restricted to Austrians only, the party has grown in the past years with its anti-immigration and islamophobic rhetoric.

What are they defending now?

On October 13th, the FPÖ - which used to be in the ruling coalition before it came crumbling down due to a far-right corruption scandal - made two proposals in National Parliament in line with their anti-immigration policies.

During a parliamentary debate on Monday, the party defended a motion of "German as a school language" in Austria. Besides bilingual and some private schools, all education institutions in Austria have German as a language of instruction. However, the party defends that it becomes the common language at all times.

"German should not only be spoken in class, but also during school breaks and at school events", FPÖ education spokesman Hermann Brückl said.

Brückl based the party's motion on data he brought, stating that "Every seventh child in a Viennese primary school knows so little German that they cannot follow the lessons" - even children who were born in Austria.

He didn't clarify how - or if - kids would be forced to switch languages while playing among themselves, though. 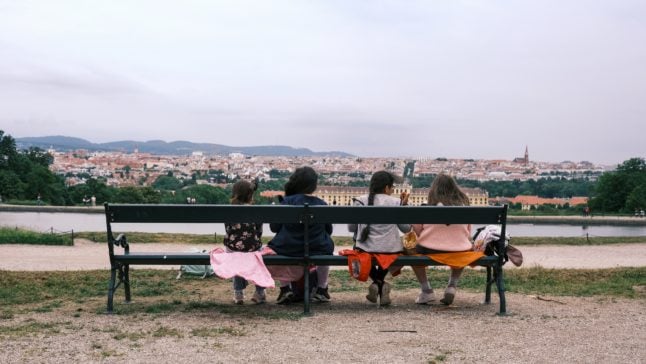 More than a quarter of Austria’s population has a “migration background” (meaning both parents were born abroad). (Photo by jussacat on Unsplash)

More recently, Austria's parliament debated amendments to the Employment of Foreign Nationals Act. In addition, the federal government approved measures to avoid specific barriers to Austrian companies and foreign workers looking for employment after their undeclared work was discovered.

The FPÖ, though, took the opportunity to mention the increase in the number of non-Austrian job-seekers registered with the job authority AMS. The party argued for "sectoral restrictions" on access to the Austrian labour market for foreign workers, including EU citizens.

FPÖ social spokesperson Dagmar Belakowitsch said she fears that domestic workers will be "squeezed out" of the labour market and that long-term structural unemployment will become more entrenched due to the Covid-19 crisis and the war in Ukraine.

"The FPÖ will continue to consistently oppose all developments that are detrimental to domestic workers", she emphasised.

How likely are these measures to pass?

FPÖ's defence of "German as a school language" was made in an official speech to the Parliament, but hasn't been submitted as a proposal, at least not yet. The party's defence of a 'restriction' in the job market, on the other hand, was voted as a motion and rejected by a majority.

It doesn't look like either would be adopted soon, especially while the Freedom Party remains an opposition force in the Austrian parliament.

However, the country will go through national elections again in 2024, when Austrian citizens over 16 will choose a new parliament and, with it, a new chancellor. Recent opinion polls make the situation extremely complicated for all parties.

One poll has the opposition centre-left party SPÖ leading with 28 percent, followed by the FPÖ with 25 percent of the votes. The coalition government of ÖVP (22 percent) and Grüne (10 percent) come next, both seeing major losses from 2019.

With no party having an absolute majority, politicians will be left to find coalitions to rule. If FPÖ continues with a fourth of the votes (or grows), they will be hard to ignore either as a potential coalition partner or a strong opposition in parliament.

When it was founded, Austria's far-right Freedom Party (FPÖ) had known ties to the Nazi party, as the party's first two chairmen, Anton Reinthaller and Friedrich Peter, were former SS officers when the party was set up in 1956.

Though it has moved towards the centre in the first decades of its existence, the FPÖ adopted a populist political stance and is known for its right-wing nationalistic discourses. Moreover, the party has grown since 2015 with a strong anti-migration view, defending the "Austrian values" and feeding fears of an "Islamisation" in the country.

On its official website, the party manifesto states among its priorities are “protecting our homeland of Austria, our national identity and autonomy”.

It also states: “Austria is not a country of immigration. This is why we pursue a family policy centred around births.”

The FPÖ has also been a protagonist in rallying against the Covid-19 restrictions in Austria, organising protests against measures such as the lockdown, the mandatory use of masks, and testing. It's also cast the coronavirus vaccines in doubt on several occasions.

READ ALSO: MAP: Who are the foreigners in Austria?

The party has also campaigned with promises of making certain social rights and benefits based on (Austrian) citizenship. For example, it defended that the Viennese state-subsidised homes, the Gemeindebau, should be allocated to Austrians.

Of course, this goes against EU law that states EU citizens should be given the same treatment as nationals of any EU country.

It also ignores the fact that foreigners also pay their taxes and generate the same wealth that allows the Austrian government to hand out social allowances and benefits.