Incumbent Federal President Alexander Van der Bellen could win this October's presidential election with an absolute majority in the first round, avoiding a run-off, the results of a recent poll showed.

Van der Bellen can count on 59 percent of the vote, according to a poll carried out by Unique Research for news magazine Profil and daily Heute.

That's less than the last survey conducted in August, but it still gives the 78-year-old a strong lead, well ahead of his closest opponents Walter Rosenkranz (13 percent), who is affiliated with the right-wing FPÖ party, and Gerald Grosz, formerly FPÖ/BZÖ (9 percent).

The poll was conducted by telephone and online between September 7th and 15th, 2022.

First of all, 1,600 Austrians over the age of 16 were asked how likely they were to go and vote on election day – October 9th.

62 percent said they would definitely vote and these 993 people were then also asked the 'Sunday question': if the presidential election were to take place next Sunday, who would you vote for?

According to the poll, 59 percent of those asked said they would vote for Van der Bellen, who used to head up the Austrian Green Party but suspended his membership in 2016 during his previous candidacy for the presidential election.

A comparable Unique Research poll from August put the figure at 66 percent. 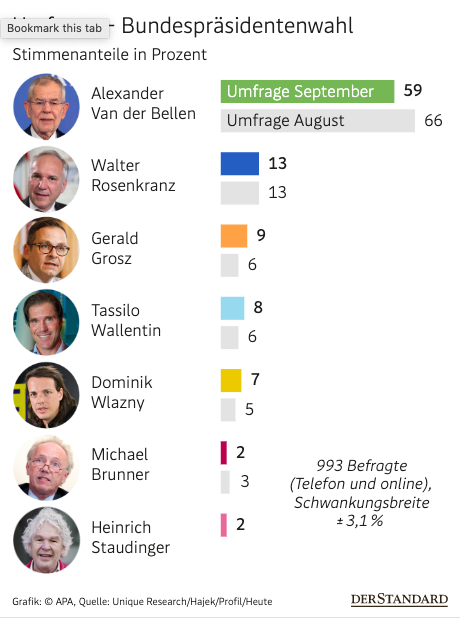 A graphic of the poll results, which shows Van der Bellen, the oldest candidate, leading the field, as published by Der Standard on September 17th, 2022.

However, this decline was to be expected as "the rest of the field of competitors was still unclear" in August, according to opinion pollster Peter Hajek, Austrian news agency APA reported.

On the basis of the survey, Hajek said that Van der Bellen had "all the trump cards", explaining that his electorate was "very well mobilised" and sure they will vote for Van der Bellen, which was not the case with his competitors.

Furthermore, Van der Bellen should be able to build on broad support from the centre-left SPÖ, the centre-right ÖVP, the Green and liberal Neos electorates, he said.

"From today's perspective, everything speaks in favour of the incumbent, a run-off election seems unlikely – as long as there are no more surprises in this intensive election campaign," he added.

The poll puts FPÖ candidate Rosencrantz in second place, with his rating unchanged from the August results.

"Walter Rosenkranz is currently unable to exploit the FPÖ's potential, which is also due to the strong competition in the right-wing camp," especially Gerald Grosz, said Hajek.

Political columnist and former FPÖ/BZÖ politician Grosz has been able to improve his standing slightly from August, rising from 6 to 9 percent in the poll.

He believes that Rosenkranz has the advantage of a well-mobilised electorate, plus, unlike his competitors, he can count on the support of the FPÖ party, while Grosz has positioned himself well with a clear focus and communication.

No chance for Brunner and Staudinger

The former Krone newspaper columnist and lawyer Tassilo Wallentin, who is casting for votes in a similar pool, also saw his rating improve from August, rising to 8 percent from 6 percent last month.

Wallentin is not affiliated to a party, but picks up votes from the FPÖ, as well as from the SPÖ and ÖVP, Hajek explained, adding that for him a lot will depend on whether he can still gain points in the intensive election campaign.

Musician and left-leaning Bierpartei head Dominik Wlazny was able to increase his approval from 5 to 7 percent this month.

Hajek explained that Wlazny is the candidate of the young centre-left electorate.

The federal presidential election will take place on October 9th 2022 as Alexander Van der Bellen reaches the end of his six-year term as president.

Van der Bellen announced he would stand for a second term last May.

Seven candidates – the highest number ever to stand for the election – are vying to take over at the Hofburg - the official workplace of the country's president.