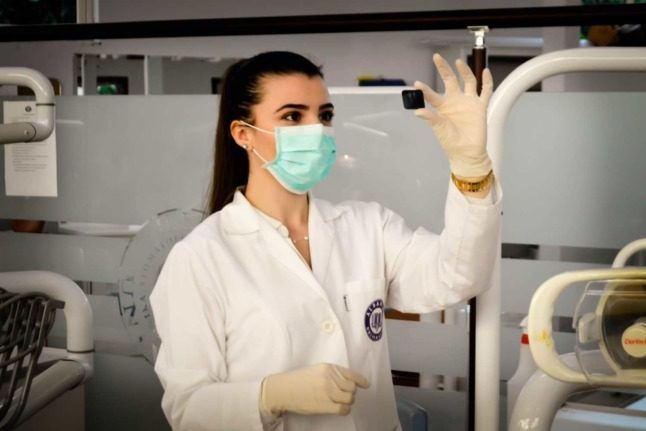 Nurses and other healthcare workers are still waiting on their Covid bonus in Austria. Photo by Ani Kolleshi on Unsplash

Confirmed coronavirus cases highest since May

Austria on Thursday morning recorded 1,221 new Covid cases, the highest number since the start of May.

Current forecasts indicate the numbers will continue to rise, with the 1,400 mark set to be crossed in the coming days.

While case numbers are not the only indicator of how the virus is spreading – and how dangerous it is – experts also forecast significant increases in the number of people hospitalised and in intensive care due to the virus.

Vienna to decide on vaccine-only bars, restaurants and events next week

The standoff between Vienna and the federal government continues, with the capital to make a call on whether to restrict bars and restaurants to vaccinated people only.

Vienna health chief Peter Hacker has been pushing for strict rules in order to encourage vaccination.

Hacker – who has widespread support both inside Vienna and in other federal states – has found some resistance from Austrian Health Minister Wolfgang Mückstein, who says its too early to put in place stricter rules.

While Hacker is pushing for the new restrictions to come into effect from September, Mückstein said he wanted to give more people a chance to get vaccinated and would only consider stricter rules from October.

A decision will be made on Wednesday, August 25th.

Health workers in Austria are still waiting to receive their 500 euro Covid bonus, which was announced in May.

The bonus, to be paid out tax free as a thank you to health workers for their efforts during the pandemic, is a state responsibility.

The states however say they have received no guidelines or information on how the money should be paid out.

“Today it turns out, regardless of whether you were taken into account in the federal government’s plans or not, you have never seen any money”, a spokesperson for Austria’s Social Democrats told APA.

While the money is paid out by the states, the funds originally come from the federal government via a 95 million euro grant.

In addition to nurses, the money is available for hospital cleaning staff and staff in inpatient rehab facilities.

A man ran over an artist in Salzburg’s Residenzplatz on Wednesday after mistaking her for a mannequin or puppet.

The 41-year-old artist, from Tennengau, was performing what she called a “reclining performance” in the old town and lay down on the ground.

Police said the woman had been told by several locals and passers by that laying down on the ground in that area was dangerous, but the warning was not heeded.

Later in the day, a 71-year-old motorist drove over the woman while trying to reach an inner courtyard.

He told police he saw an obstruction in the road which he thought was some kind of doll and was unable to move around her, so he decided to run it over lengthways.

It was only when he heard screams and felt a drag under the car that he decided to stop.

The artist was injured and transferred to Salzburg University Hospital.

Police said an alcohol test carried out on both the driver and the artist was negative. Police also indicated that they were unsure why the artist did not move when the motorist approached her.

She told the police that she the performance was part of an art fair and that it was not her first such performance – although it was the first performance which ended in such a way.

Police charged the man with driving causing negligent bodily harm, although the public prosecutor must decide whether or not to push charges.