What are the strict rules in Austria for New Year's Eve fireworks?

With New Year's Eve coming up many people get ready for fireworks displays and may want to light up some fireworks themselves. Here are the rules in Austria.

Austria has very strict rules on fireworks and firecrackers, and the country is moving towards a less noisy form of celebration. In Vienna, fireworks remain forbidden for the second year in a row as the administration seeks to avoid the burden on children, the elderly, animals and the environment.

"On New Year's Eve, any kind of bang should be avoided - only garbage is left after the very short pleasure", said Jürgen Czernohorszky, Climate City Councillor in the Austrian capital. Provinces and local authorities are free to set some rules on pyrotechnics but must follow specific federal baselines.

READ ALSO: How to celebrate New Year’s Eve like an Austrian

For instance, fireworks are divided into four categories (F1, F2, F3, F4) with specified rules for how old users should be and if they need any special license.

A category F1 can be fired from the age of 12 and includes smaller items such as sparklers and party poppers which have very low danger and a negligible noise level, according to the government. Category F2 is allowed from the age of 16. It includes items considered of low hazard and low noise level, intended for use in demarcated areas outdoors, such as flash bangers or mini rockets and spinners.

For categories F3 and F4 usage, which include firecrackers and firework bombs, the person needs to have some experience or even be a specialist depending on the type of pyrotechnics. 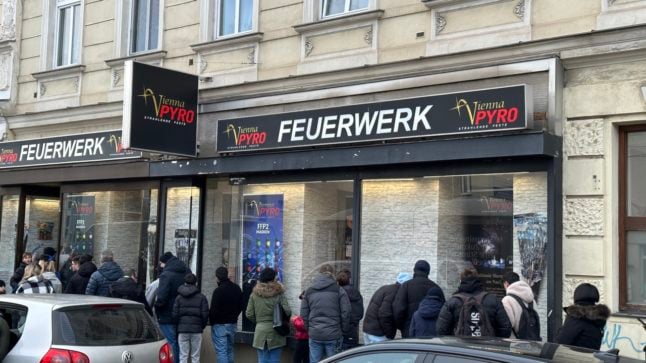 People line up on the street to enter a firework store in Vienna on December 29th, 2022. Despite the strict rules, legal fireworks are very popular (The Local / Amanda Previdelli)

What are the federal rules?

The federal rules, the minimum standard to be followed, restrict age depending on the four categories and require a license for certain fireworks products, as shown above.

Additionally, category F2 firecrackers are generally not allowed in Ortsgebiete (a "local area" with at least five residential buildings and parks and sports facilities) all year round. However, local authorities could allow a partial exception if there is no danger to people, their property, or public safety or unreasonable noise pollution.

Within and in the immediate vicinity of hospitals, children's homes, elderly homes and care homes, churches, places of worship, as well as animal shelters and zoos, the use of fireworks or New Year's Eve firecrackers is always prohibited, even if they are outside residential areas. There are no exceptions unless the fireworks do not produce any sounds.

The use of New Year's Eve fireworks of category F2 within or in the immediate vicinity of large gatherings of people, whether inside or outside a residential area, is also strictly prohibited.

Fireworks are also not allowed in the vicinity of petrol stations or other explosive areas, and the F1 and F2 units must be lit individually and not near one another. Furthermore, certain types of fireworks, especially the Schweizer Kracher that gives a flash bang, are also strictly prohibited in Austria.

Non-compliance may result in a fine of up to €3,600 or imprisonment for up to three weeks.

Ahead of the New Year celebrations, police in Austria have increased operations to find illegal fireworks, especially categories F3 and F4 and products brought from abroad without the minimum safety standards.

In Vienna, for example, police seized hundreds of illegal pyrotechnics and expressly warned against the use of unauthorised firecrackers and improper use of fireworks. Other Austrian towns and provinces also increase police activity days before the celebrations.