Ancient monasteries in deepest provincial Austria do not normally feature on the bucket lists of the TikTok generation. Nor do libraries.

But the Admont abbey library in the small Styrian town -- which claims to be the largest monastic library in the world -- is also the most Instagramable, with Baroque interiors so breathtaking they almost look like they have been Photoshopped.

And Britain's Daily Mirror gushed that the library "could give Michelangelo's Sistine Chapel a run for its money with its beauty." 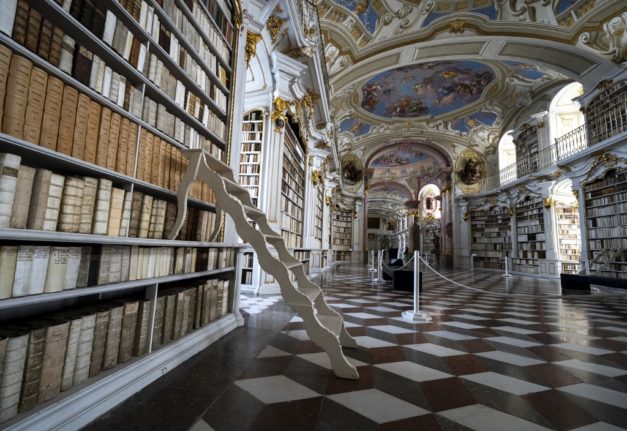 The Admont abbey library nestled amid the mountains of central Austria -- which claims to be the largest monastic library in the world. (Photo by JOE KLAMAR / AFP)

Once far from the beaten track, the near 950-year-old Benedictine abbey now struggles on some days in summer to accommodate all the influencers and selfie hunters who want to immortalise themselves amid its frescos and chequerboard marble floors reminiscent of the library in Disney's "Beauty and the Beast".

Two of its 23 monks are active in the monastery's online promotion, as at ease with concepts like "content" as with the finer points of theology, even offering "online spiritual advice". A virtual tour of the library is also available.

"We have succeeded, together with the monks of our house, to transmit content that captivates and interests people," communications manager Mario Brandmueller told AFP.

The abbey's Facebook reach has rocketed to 25 million people per month -- 2,500 times its audience back in 2018. From being something of a local gem nestled amid the mountains of central Austria, it has become an international "crowd puller", Brandmueller said, with photos and videos of the 18th-century library featured on travel and culture platforms in a dozen countries.

The abbey's promotional work even earned it an Austrian government prize for "special achievements in the field of public relations and institutional communication". 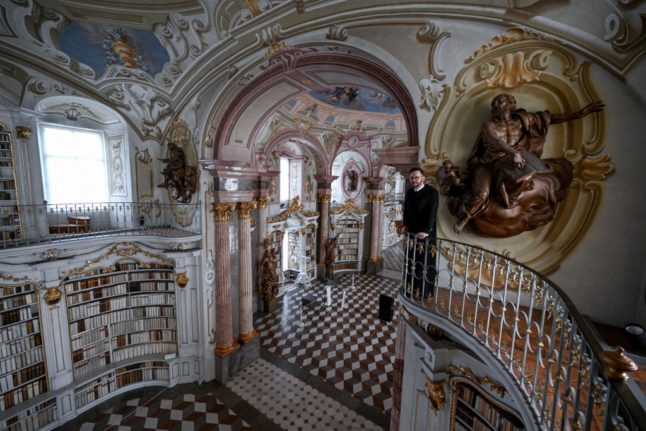 The 70 metre-long hall is packed with 70,000 books. While it was opened in 1776, the oldest manuscripts date from the eighth century and were miraculously spared from a 1865 fire that engulfed much of the town and the monastery. (Photo by JOE KLAMAR / AFP)

But this summer the monastery was pushed to its "organisational limits" handling the 15,000 visitors a month it was getting, although Brandmueller said more visitors could still be accommodated in winter.

The library's 70-metre-long hall is packed with 70,000 books. While it was opened in 1776, the oldest manuscripts date from the eighth century and were miraculously spared from a 1865 fire that engulfed much of the town and the monastery.

One of the library's hidden architectural gems is a secret staircase leading to a reading platform. But it is only accessible to the masses on the virtual tour.

Father Maximilian Schiefermueller, 41, who takes care of the archives, told AFP that as well as receiving queries from researchers and historians, they also get very "diverse requests... from people who want to do a photo shoot to a fashion show" within its hallowed halls.

"So you have to be very careful, and I'm also very strict to evaluate what makes sense... After all, it's a monastery."