Halloween: Where to find Austria's most haunted places

Austria is steeped in history and – according to some legends – a few ghosts too. Here are some of the most haunted places in Austria to explore on Halloween.

Schloss Moosham in the Lungau district of Salzburg was first built in 1191. It has been the scene of many battles over the centuries, including during the crusades and several Austro-Hungarian wars.

But it was the Salzburg witch trials (Zaubererjackl trials) in the 1600s that really put the castle on the (most haunted) map.

FOR MEMBERS: Autumn in Austria: Six destinations to add to your travel list

Moosham was the location for the trials between 1675 and 1679, and both sentencing and executions took place there. During the trials, 198 people were accused of practising witchcraft and 138 people were killed, often after torture.

Then, as if that wasn’t enough gore for one castle, Moosham was at the centre of more supernatural suspicions one century later.

In the late 1700s, local villagers believed the castle residents were werewolves after several dead animals were found within the castle grounds. Legend has it that the villagers then captured and murdered the residents in their own courtyard.

In the years following these events there have been many reports of ghost sightings and paranormal activity at Moosham. Most commonly, people feel like they are being watched or see shadowy figures in corridors.

The Hofburg Palace, which is the former principal imperial palace of the Habsburg dynasty and now the official residence workplace of the president, is considered to be one of Vienna’s most haunted places.

It is believed the ghost of a guard falsely accused of rape haunts the grounds while still trying to prove his innocence. And some even claim that the spirit of Empress Sisi (who took great interest in the supernatural) roams the hallways of the palace at night.

READ ALSO: Everything that changes in Austria in November 2022

Then there is the White Woman, who is rumoured to have appeared to Emperor Franz Joseph I in the Reich Chancellery wing. It was believed that if she was wearing white gloves it meant a birth in the palace, but if her gloves were black, it symbolised a death.

Whatever you believe, there’s no denying the fact that the Hofburg Palace has seen a lot of history.

According to the restaurant’s website, the site of Kaiserwalzer used to be the studio of Bernard Ludwig, a royal court cabinet maker who died in 1897.

Later, when the building became a tavern, Franz Joseph I apparently became a regular customer (from 1874). It is reported that he enjoyed drinking the Pilsner Urquell served in the bar.

Today, the Kaiserwalzer is a popular location for traditional Austrian food like Schnitzel and Kaiserschmarrn. It is also the scene of ghost sightings.

Several customers have reported seeing a white woman or shadowy figures in the restaurant. As well as other unexplained happenings like glasses falling off tables and the sound of furniture being moved around.

So if you fancy tucking into a Schnitzel while possibly spotting a ghost, then head down to Kaiserwalzer this Halloween.

READ NEXT: IN FIGURES: Everything you need to know about who lives in Vienna 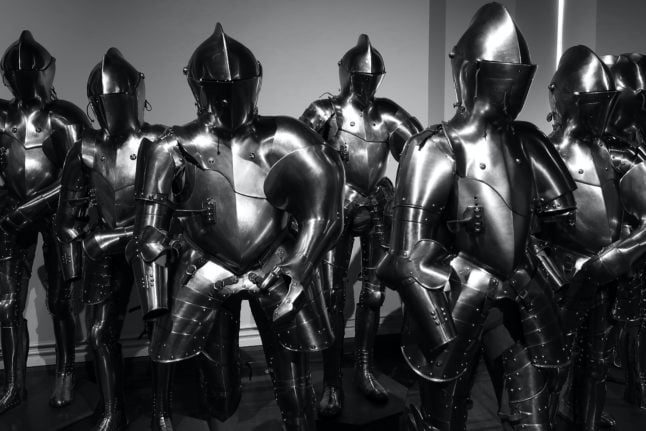 The spooky inhabitants of the Ambras castle. (Photo by Hugo L. Casanova on Unsplash)

One of Innsbruck most well-known tourist attractions is also believed - by some - to be haunted, or at least very spooky. The story goes that you can sometimes hear what seems to be people wearing heavy robes and carrying object in the courtyard at midnight - some people report seeing a knight and a noblewoman walking mourned.

The prince, Ferdinand II of Tyrol, who is the former lord of the castle, is said to have been host to several parties where guests would join drinking games... and "rituals". Today, visitors are startled by hearing the voices of the party guests.

The church that sits on the top of Leopoldsberg was built in the 12th century, so this landmark has collected many stories over the centuries.

Reports of paranormal activity at the site include lights in the windows of the building, as if someone is walking around with a candle. And many dog owners report that their pets don’t like to go near the church.

Leopoldsberg was also the scene of battles during the Second Siege of Vienna in 1683, which further fuels the rumours of ghosts on the top of the hill that overlooks the capital.

Hoher Markt is a fancy part of Vienna with upmarket cafes and boutiques. But the area has a gruesome history at odds with how it appears to today.

In mediaeval times, the square at Hoher Markt was the scene of executions for hundreds of years. People were either hanged, quartered, beheaded or burnt.

As a result, many people believe the aura of death still hangs over the place, as well as the spirits of some of those killed in the square.

Amid the reports are apparitions of people dressed in clothes from the 14th century, and sightings of a ghostly executioner.

Mysterious accidents and acts of arson have also happened at Hoher Markt over the years, leading many people to say that the place is haunted.