'Insensitive and inefficient': Your verdict on Vienna's immigration office MA 35

International residents in Austria have spelled out a long list of complaints about the infamous MA35 immigration office in Vienna, although there were many who appreciated the service.

In Austria, foreigners looking to apply for a visa, get a residence permit (as an EU citizen or not) or apply for Austrian citizenship need to go through the municipal office of the city where they live.

The office for immigration and citizenship in Vienna, known just as MA 35, is for many immigrants, their first encounter with Austrian bureaucracy. Sooner or later, every foreigner living in the capital will pay a visit to the infamous MA35.

The Local readers have shared their experiences with the MA35, with a majority of the respondents saying it was either "very poor" (37.9 percent) or "poor" (19 percent"). 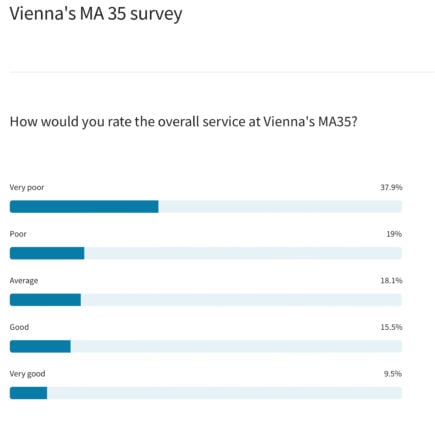 Nicole, who comes from the United States and has lived in Vienna for five years, said the experience was "madness". She explained that she submitted all the information necessary for her residence permit and was told everything looked good, and she just needed to wait.

"After six months, they contacted me to tell me that some of my documentation had expired (because they were sitting on it and not doing anything with it!), so I would need to resubmit, which I did," she said.

She then waited almost a year before contacting the Austrian Ombudsman Board (Volksanwaltschaft). "Two days later, my card was magically ready. I had to cancel all travel plans for the first 11 months I spent in this country. I felt trapped and unwelcome here", she said.

Juliana, who brought a native friend to help her with the German, shared a curious situation: "They even asked for documents that didn't exist, but in the end, it all worked out".

For Jack French, who is originally from the UK, the experiences with the department have left a strong impression: "MA35 are the most bureaucratic, insensitive and inefficient people I have experienced during more than 20 years living in Austria."

Mizi, from Japan, has had similar problems, summarising: "Delays, mistreatment, and mistakes! All of them on multiple occasions.".

She added she felt uncomfortable making complaints as her "residence permit is at stake". After 14 years in Vienna as a person from a non-EU country, she stated: "all I can say is that they are hopeless".

Many people have complained about mistakes by the authorities causing headaches and delays. Susanne Manz, from Switzerland, is one of them: "They were slow, unprofessional and in the end, I even had to justify myself in court, even though they made a mistake."

MA35 is also where people can apply for Austrian citizenship (Photo: Amanda Previdelli / The Local)

Andrew, from the United States, also had to deal with the authorities making mistakes with his process.

He said: "having inaccurate guidance on the website, the lack of means to contact anyone and discuss the situation, and the fact an MA35 case manager so grossly overlooked the documents and payment, is inexcusable; people's family status, residence, and ability to work depend on the outcome."

Besides the delays and lost documents, many immigrants complain about the lack of service in languages other than German.

READ ALSO: Visas and residency permits: How to move to Austria and stay long-term

"They are not willing to speak in English - even though it is the immigration department, and some of the people who go there still don’t speak German", said Maria Paula Riva, who came from Brazil two years ago.

Emanuel Frazão Afonso shared a similar situation: "I am Portuguese and they didn't speak a word in English; they were very rude to me and my wife".

But even those who did speak German had some peculiar situations, like Brenda Osorio, who comes from Mexico and said she didn't have any problems. "The only silly situation I was in was that they asked me for an A2 German certificate when I have a B2 from the university of Vienna. So they made me pay for an additional test."

Not all is bad, though

Like Brenda, many other respondents said they had good experiences with the MA35. Especially those who came recently to Vienna, spoke German or had assistance (professional or not).

Chilean Francisca Osorio arrived in Vienna a few months ago and said: "Everything went pretty well. I don't speak much German, so the officer noticed that and switched to English. He was very helpful and wanted me to understand the next steps".

READ ALSO: QUIZ: Would you pass the Austrian citizenship politics and history test?

Hailing from Australia but being a German speaker, Carl Philipp Hoffman said he hadn't experienced treatment. Still, he noticed: "but I am white, German-speaking and with a German name. I have seen more 'exotic' people treated... Differently."

Those who come from the European Union also usually have a smoother experience. Ildiko Esztergalyos, from Hungary, said: "I asked for an appointment online in January, had it for April, and it did not take more than 15 minutes in the office. So, despite the long waiting time, the process itself went smooth and quick".

Pallavi Chatterjee, who comes from India, said most of her experiences with the MA35 had been positive.

She had to apply for the RWR work-based residence permit: "Easiest process so far; I sent everything online and made an in-person appointment, where they were super friendly and supportive. Then, five weeks later, I got the news that I could pick it up within two weeks.

"I go, pick it up; they're super nice and polite. I'd say the Business Immigration department is likely better-trained and better-equipped to handle these kinda cases."

A Jordanian respondent also noticed a recent change in the general experience: "Starting in 2022, my experience has improved tremendously: after submitting the needed documents, making appointments and answering email and phone calls became much faster".

And a Viennese resident from Bosnia also had an excellent experience: "I got my visa (the first) 36 days after I submitted my application. Everyone was extremely kind, and on the other hand, I also came prepared with the necessary documents and everything that was asked of me."

"They even spoke to me in English because my German was not at a level that would allow me to participate in such a situation. So, all in all, I am very satisfied."