Since many companies can no longer afford the sharply increased energy costs, the government has decided to increase the budget for a subsidy from €450 million to €1.3 billion.

Specifically, funds are earmarked for companies that spend at least much of their turnover on electricity, gas and fuels, the daily newspaper Die Presse reported.

The first money is supposed to flow later this year, but the subsidies will be retroactively paid to bills from February to September 2022.

Each company can receive up to €50 million.

Tyrol could have a three-way coalition

In Tyrol, there will likely be either a two-party coalition of centre-right ÖVP and centre-left SPÖ or a tripartite alliance of ÖVP, Greens and Neos.

Anton Mattle, the  ÖVP candidate tasked with forming the state’s new government, will invite these parties “in a timely manner” to an exploratory round before a final decision on coalition negotiations, he told journalists on Wednesday evening after the initial discussion round in Innsbruck’s Landhaus.

Tyrol had state elections on Sunday, and the ÖVP suffered a significant loss, though it was the most voted party. It now needs to enter into an agreement with other parties to form a parliamentary majority.

If you see the face of former vice-chancellor Heinz-Christian Strache (formerly FPOe) on the news often this week – and maybe even on one or two satirical drawings, that’s because of the latest, well, gossip regarding the politician.

The once powerful politician fell in disgrace after a video of him bragging about his party’s influence on Austrian media and organisations leaked. The video, shot with a hidden camera and the help of people pretending to have ties with Russian oligarchs, was filmed on the Spanish island of Ibiza. It was released in 2019 and crumbled the OeVP-FPOe coalition.

Since then, both parties, and Strache, have faced corruption allegations and charges.

Now, the controversy surrounding the former vice-chancellor also involves his personal life. He recently divorced from long-time partner Philippa Strache, an Austrian politician who stood by him during the Ibiza affair.

The reason came out this week: Strache apparently hid the fact he had a child with another woman from his wife. A daughter was born in 2016, just eight months before the lavishing Strache wedding ceremony in Wachau.

READ ALSO: ‘Ibizagate’: What you need to know about the Austrian political corruption scandal 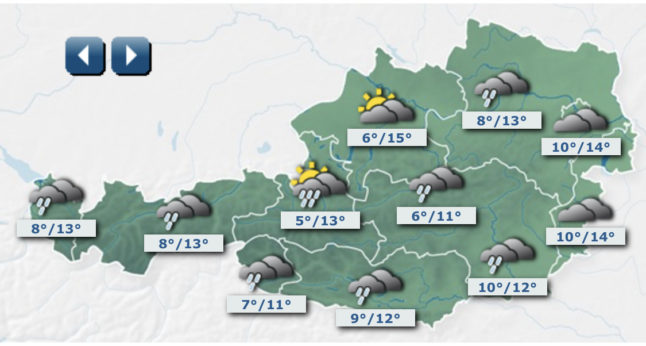 Numerous cloud fields will cover the country, the sun will only appear occasionally and there will still be rain showers in the morning, especially in the eastern half, Austria´s meteorological institute ZAMG said.

In the afternoon, the precipitation will decrease, but in the west and south of Austria, rain and showers will set in again with the arrival of the next disturbance. The snow line will be around 2000m above sea level.

Winds will often be light from mainly northerly directions. Afternoon temperatures should stay between 9 and 16 degrees.

If you have any questions about life in Austria, ideas for articles or news tips for The Local, please get in touch with us at [email protected]at.