IN FIGURES: Everything you need to know about who lives in Vienna

Ever wondered who lives in Vienna? Where do they come from and what do they do? The latest report by Statistics Vienna provides some answers.

Vienna is a growing city of 1,931,593 people and is expected to hit the two million mark by 2027 – at least according to Statistics Vienna.

In fact, Vienna has experienced the highest population growth in Europe over the past 10 years, when compared with the ten largest cities in the EU. Vienna is also now the fifth largest city in the bloc.

But what does the population of Vienna actually look like? This is what the figures tell us.

READ MORE: ‘I feel ripped off’: What it’s really like living in Austria right now

Who lives in Vienna?

Vienna is split quite equally between the sexes with 51 percent of the population female and 49 percent male. 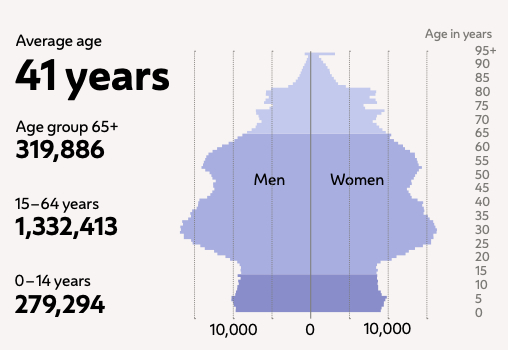 A breakdown of the average age of Vienna's residents by Statistics Vienna.

This aligns with the City of Vienna’s claim that the capital is “the engine driving Austria’s economy” with 31 percent of Austria’s research and development taking place in the city.

Vienna also generates 25 percent of the country’s gross domestic product with 86 percent of all jobs belonging to the services industry, followed by manufacturing at 14 percent.

FOR MEMBERS: Wiener Weinwandertag: Everything you need to know about Vienna’s ‘Wine Hiking Day

The average age for a woman to get married in Vienna is 31, with 33 for a man.

The average for a woman to become a mother in Vienna is also 31 years (up from 26 in 1990) and most families have three children.

Vienna’s animal population includes 56,701 dogs, but there are no figures for cats as they are not subject to licensing laws by the City of Vienna.

How international is Vienna?

The latest snapshot of the population of Austria’s capital shows just how international the city is, with in-migration outpacing out-migration by 9,581 people. 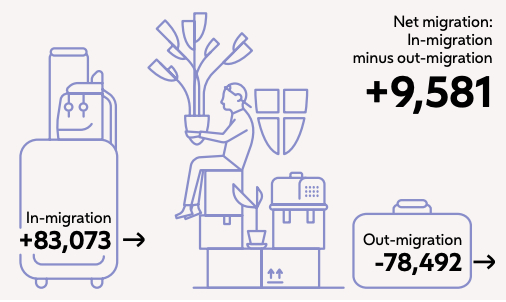 Data from Statistics Vienna shows in-migration is higher than out-migration in Vienna.

As of January 1st 2022, Vienna was home to people with 184 different nationalities, with foreigners making up around 24 percent of the city’s entire population.

But the net migration into Vienna by people from other countries follows a different pattern, as the infographic below shows (and reflects geopolitical developments from recent years). 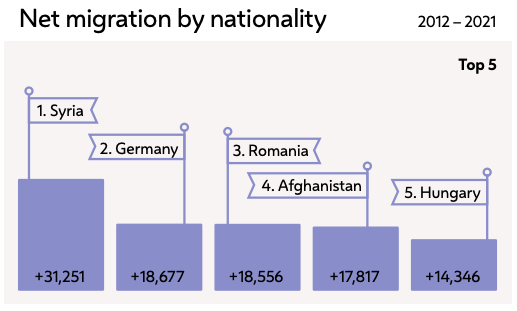 More people from Syria have migrated to Vienna than any other nationality since 2012. Data from Statistics Vienna.

FOR MEMBERS: Property buying rules for international residents in Vienna

What do the figures mean?

So what exactly does the Statistics Vienna report reveal about life in Austria’s capital city?

Michael Ludwig, Mayor and Governor of Vienna said: “On the one hand, it is a highly dynamic metropolis, and on the other hand, it remains what it has always been — a charming city that is a good place to live.

“Whatever you need for your life — work, education, healthcare, housing — Vienna has it all and more, and that is not going to change anytime soon.”

And what about those predictions that Vienna’s population will hit 2 million people by 2027? How is Vienna preparing for the milestone?

“For we want all inhabitants of Vienna to have all the prospects and opportunities imaginable going forward and we want living in our city to remain affordable.”