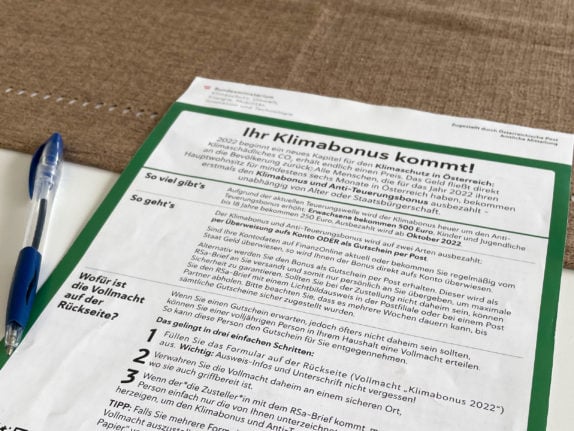 The Austrian government letter claiming "Your climate bonus is coming!": but when? (Photo: Amanda Previdelli / The Local)

Austria is facing increasing inflation, brought mainly by the rising energy and fuel costs, and people have also felt it as even essential goods such as food have become more expensive.

The federal government announced several measures to try and cushion or contain the rising prices, from bonus payments to a cap on electricity prices, as The Local reported. One of the most significant measures for the population is the one-off €500 payment known as the “climate and anti-inflation bonus”, or Klimabonus, for short.

Every single person who has legally lived in Austria for at least 183 days in the year is entitled to it – people under 18 years old qualify for a €250 payment.

The government has said that payments would be paid “from the beginning of September”. Still, two weeks into the month, many people still haven’t gotten it.

What should I do if I haven’t received it yet?

The short answer is: wait a while. Payments were meant to start from the beginning of the month, but that doesn’t mean everyone would receive them on September 1st.

In fact, hundreds of thousands will have to wait until the end of the first week of October, public broadcaster ORF reported.

What if my partner has received it and I haven’t?

Even if someone you know has received it already on the same bank account you are supposed to receive yours, you might still get it in early October.