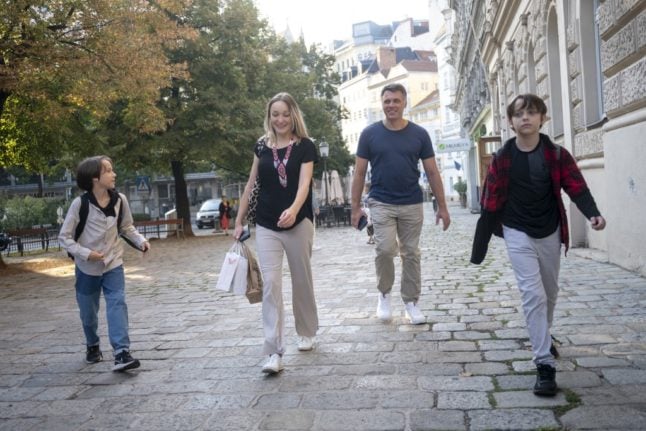 Their three boys — Danylo, nine, Denys, 11, and Dmitry, 15 — began the new school year there this week, another landmark in their new life in the Austrian capital.

Despite being “a bit stressed” about their German, they wrote little messages to go with the presents for their teachers. Back home in Ukraine, they would have brought them flowers.

Mother Irina, 39, wore her traditional Ukrainian “gerdan” necklace for the occasion, knowing that school is the first step to integration.

AFP is following the refugee family from Irpin, one of the Kyiv suburbs that saw the worst of the fighting in the war’s early weeks, during the first year of their new life in a land where a quarter of the population are
immigrants.

After six months of uncertainty, little Danylo has taken to school like a fish to water. He lists out all the pens and stationery he needs in class in German. 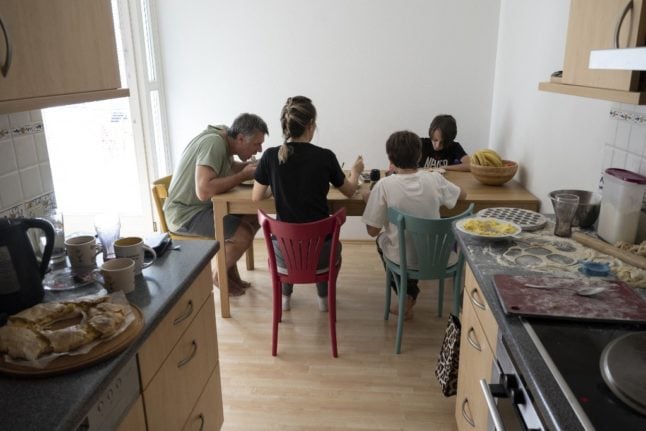 Ukrainian parents Irina Titkova (2nd L) and her husband Valerii Titkov (L) and their sons Danylo (R) and Denys have a dinner in their newly rented apartment in Vienna, Austria, on September 2, 2022. (Photo by JOE KLAMAR / AFP)

But his oldest brother prefers to hang around with his Ukrainian friends than knuckle down to his school work.

Worried — and doing her best so her boys finally feel at home — Irina is meeting the headmistress to talk about how they can help Dmitry.

The family have just moved into a pretty two-bedroomed apartment that looks onto a leafy courtyard in a residential area half an hour from the centre of Vienna.

It’s a huge relief to finally have their own place, and not to have to depend on the goodwill of others. Up to then, the five of them shared the same room in a flat they found through friends of friends.

“After three months of searching every day, I got a call from the (Protestant charity) Diakonie” saying they had found an apartment, said Irina. “It was a miracle on my birthday!”

Their teenager now has a room where he can play his guitar. The younger boys — both bundles of energy — have bunk beds. There’s a hammock on the balcony, an invitation to dream of better days ahead. And all for a rent of €400 euros a month.

“It gives us a feeling of comfort,” Irina said with a smile. 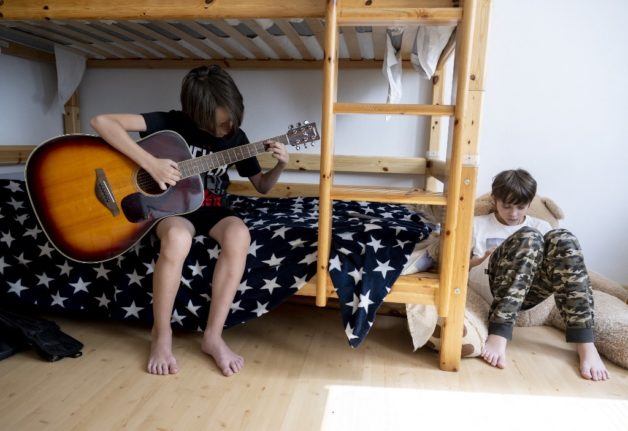 Starting all over again is not easy, particularly when you have had to leave your home, your family, your job and your status behind.

The former English teacher now works at the checkout of an American fast food restaurant. Her husband, Valerii, a physiotherapist back home, also works there in the storeroom.

‘We need to be useful’

“It’s tough… but it’s money, and I can earn it, and it’s not a donation. Maybe I am too proud, but I feel we need to be useful to society.”

The Titkovs want to “feel equal… and not just like refugees”. The family ended up in Vienna by accident because Irina had taken a school trip there when she was teaching.

“I remember how beautiful it was and multicultural. Vienna impressed me.” Yet in June the Titkovs almost returned to Ukraine. Hearing about friends who had been killed, about war crimes, and from those who had stayed behind to fight, Irina was wracked by guilt for not being able to help. 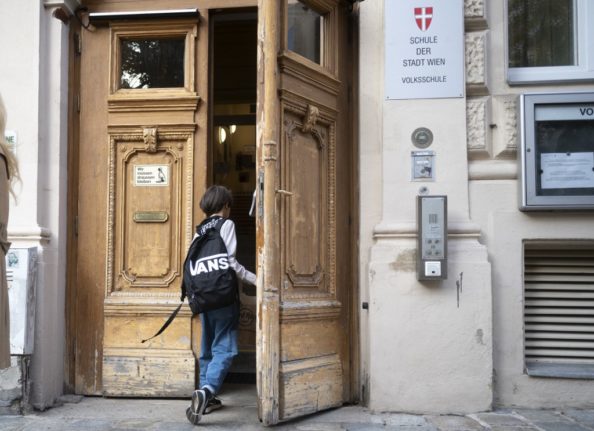 Then the fighting intensified again and the family — one of seven million people displaced by the invasion, according to the United Nations — had second thoughts about going back.

“Maybe it’s (our) destiny to be here, and the chance to explore another culture,” Irina said.
“When I see soldiers having to fight, obviously it causes me pain,” said Valerii, who has an athlete’s build. “But honestly I am incapable of going to war. I couldn’t kill a fly.”

As a father of three children, he is one of the very few men of fighting age allowed to leave and escape conscription into the Ukrainian military.

It is the second time that this Russian speaker has been uprooted by war, having had to leave Azerbaijan at the age of 13 for Kyiv when a post-Soviet conflict flared up there with neighbouring Armenia.

But for now the family are focused on the future and managing those back-to-school butterflies.

For at the end of the month, the two parents will return to school themselves, to start a German course…

Back in February, Austria sourced around 80 percent of all gas from Russia, with 10 percent coming from Norway, five percent from Germany and the remainder from other sources.

This put Austria in a delicate position as the EU began placing sanctions on Russia and experts voiced fears about Russia turning off the gas supply to Europe. This also took place at a time when Austria’s gas reserve tanks were only around 12 percent full.

READ MORE: Can British people in Austria claim the winter fuel payment from the UK?

However, as the first snowfall now covers more parts of the country, E-Control (the government regulator for electricity and gas markets) has confirmed that Austria reduced imports of Russian gas to 21 percent in September.

The country’s gas tanks are also well stocked at just over 95 percent following a mild autumn. Although around a third of the gas belongs to neighbouring countries.

So how did this happen and where is Austria getting gas from now? The Local took a closer look to find out.

How did Austria reduce imports of Russian gas?

The biggest change to how Austria sources natural gas was by booking line capacity on pipelines that flow from Germany and Italy, reported Die Presse.

The gas now flowing to Austria is mostly coming from Norway or is liquefied natural gas (LNG).

At a recent press conference in Vienna, Johannes Schmidt from the Institute for Sustainable Economic Development, said: “Actually, it’s incredible what Europe and Austria in particular have achieved here over the summer.”

Austria’s partially state-owned OMV has also booked 40 terawatt hours (TWh) of gas transport capacity from Norway and non-Russian LNG suppliers for the period from October 2022 to September 2023. This gas is delivered to a tank in Oberkappel, Upper Austria, via Germany.

Picture taken on May 3, 2022 shows a general view of the largest Austrian refinery OMV at Schwechat near Vienna, Austria. (Photo by JOE KLAMAR / AFP)

A statement released from the Federal Chancellery said: “The United Arab Emirates are a strategic partner of Austria and will make a contribution to the security of supply with LNG deliveries next winter, as agreed between OMV and the Emirati ADNOC.

“Furthermore, the Austrian and Emirati governments will intensify cooperation on energy issues and climate protection.”

However, purchasing gas from new sources hasn’t been the only tactic to reduce Austria’s dependency on Russian gas.

In July, Austria and Germany finalised a solidarity agreement to secure gas flows between the two countries in the event of an energy crisis. And in September, the Austrian Federal Government launched the “Mission 11” campaign to encourage consumers to save energy.

Finally, there are long-term plans to expand renewable energy infrastructure across Austria to reduce the overall dependency on natural gas. But the results of this part of the plan will not be seen until the coming years.

READ MORE: How expensive are gas and electricity in Austria right now?

Experts are positive about Austria’s ability to get through the coming winter without running out of gas.

However, they are now concerned about winter 2023/2024 with plans already being hashed out about how to secure gas supplies next spring and summer to fill up the tanks again.

The procurement of gas has also come at a big cost to Austria with the government spending €3.95 billion alone on securing the recently implemented strategic gas reserve of 20 percent of overall consumption, reports ORF.

And with energy prices set to skyrocket again for the next storage season, it’s likely the Austrian government will have to dig deep into the financial reserves once more in the spring. 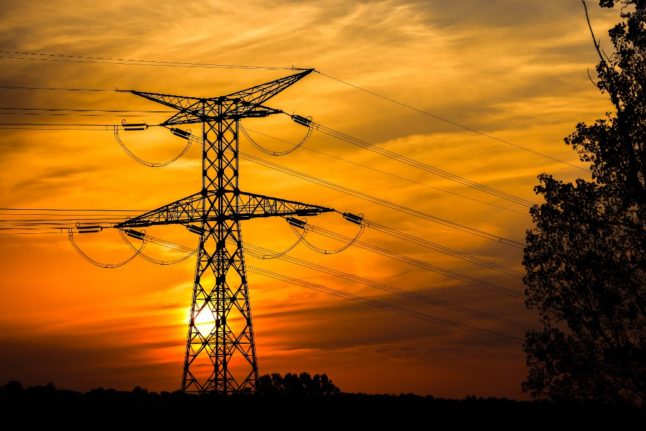 ENERGY
Reader question: What are the chances of blackouts in Austria this winter?