Why are Austrians so pessimistic right now and is there any reason to be positive?

Research has revealed that a large part of the Austrian population look to the near future with scepticism and pessimism. But why?

Almost half of the Austrian population (47 percent) eligible to vote (Austrian citizens older than 16 years old) say they are looking to the near future with scepticism and pessimism. Only 23 percent express optimism and confidence.

They are even gloomier when it comes to evaluating the economic situation, as 62 percent say they expect it to deteriorate for the next twelve months. The results come from research commissioned by the daily newspaper Der Standard and show extremely low levels of trust: Only four percent of the population entirely agrees that people can usually be trusted.

The survey run by the Linz Market Institute regularly asks the question of optimism and pessimism, but optimism has never been so weak and pessimism is at record levels at the same time.

But why are Austrians so pessimistic?

The research didn't ask respondents why they were pessimistic. However, it did show that people have little trust in the state, with 18 percent saying they have no trust in government institutions at all.

The economic situation is also a factor, with record levels of doubts about the economy in the future. As Austria faces rising inflation, an energy crisis and the cost of living soaring, there are certainly reasons to look to the future with pessimism - or at least caution.

Since Russia invaded Ukraine in February, the world has faced an unprecedented energy crisis, with heating, electricity, and fuel costs soaring. This, in turn, has pulled inflation up and prices of essential goods and services have also soared.

In fact, inflation has reached a 20-year high in the Alpine country, reaching 9.2 percent in July and tightening household budgets across Austria. Moreover, a recent survey revealed that more than 50 percent of Austrians do not feel financially well prepared for unexpected life turns.

With the colder months just around the corner, Austrians are concerned about rising costs for electricity and heating. Especially in a world where a climate crisis has made extreme weather more common.

During summer, Austrians had to deal with soaring temperatures, heat waves, and both severe storms and drought. There are fears that winter will also be warmer - not so warm that heating will not be needed, but hot enough that it could affect winter sports.

And, of course, there are still fears regarding the coronavirus pandemic. With low vaccination rates (the federal government has already announced a new campaign to try and bring numbers up), a new Covid-19 wave could pressure hospitals again.

Additionally, any restrictive measures could lead to further tension in society. Austria has had strict lockdown measures, vaccination requirements for entry, and a vaccine mandate (which was cancelled before unvaccinated people had to pay any fines). All these measures have been met with backlash by part of the population - at times with weekly demonstrations in Austrian cities. 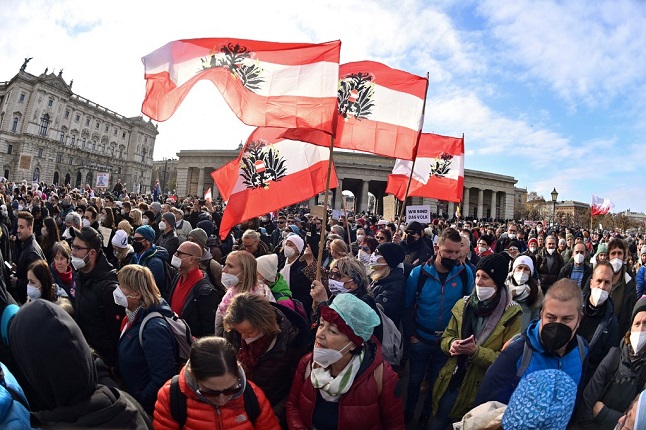 In this file photo taken on November 20, 2021 demonstrators wave Austrian flags with the emblem turned upside down during a rally held by Austria's far-right Freedom Party FPOe against the measures taken to curb the coronavirus (Covid-19) pandemic (Photo by Joe Klamar / AFP)

The Covid-19 measures have been controversial and put a clear divide in Austrian society. They have even led to the creation of a new political party (the MFG) which has already won spots in state legislatures with its anti-vaccination rhetoric.

At the same time, the federal government has faced corruption accusations after leaked text messages that point to bribes, abuse of power and backstage deals. They eroded the trust in government in Austria and led to the former wunderkind Chancellor Sebastian Kurz resigning and then leaving politics altogether.

The current ÖVP-Green coalition has survived so far, but voting intentions show that it has lost a majority.

National elections are set to take place in 2024, but Austrians are voting on their president this year, with incumbent Alexander Van der Bellen a clear favourite. Still, the number of ballots in favour of Covid-sceptic or far-right candidates will be closely watched.

Are there reasons to be optimistic?

With so much going on, from war to energy and food supply issues, it may seem that there are no reasons to be optimistic about the future.

Some facts could help Austrians see the near future in a less harsh light, though. For example, when it comes to the energy crisis, the government has stated that there is enough gas supply to keep people warm in winter.

By mid-August, Austria's gas storage capacity was at 60 percent full, up from just over 10 percent in early April.

While prices are still rising, a flash estimate for August inflation puts it at 9.1 percent, compared to 9.2 percent the month before. "This is the first break in the trend of steadily rising inflation rates that have persisted for more than a year", Statistics Austria director Tobias Thomas said.

Additionally, Austria's economy has continued to grow in the second quarter of 2022, according to Statistics Austria.

"The gross domestic product was 6.0 percent higher than in the same quarter of the previous year and thus 3.8 percent above the corresponding period of the year 2019 before the Corona crisis. Almost all sectors of the economy contributed to growth, such as industry, utilities, trade and transport. In addition, accommodation and food services posted strong growth of 77.2 percent, even though the comparable quarter of the previous year was still significantly impacted by lockdown measures", Thomas said.

The federal government has also announced a series of measures to cushion rising prices in Austria, from an electricity price cap to social payments that could add up to thousands of euros in savings for families.

At the same time, coronavirus infection numbers have gone down in Austria. Despite the fear of an autumn/winter wave, the federal government has reiterated the country has enough vaccines and specific medication against Covid-19.

Austria is also expecting the new vaccines targeting the omicron variant in the following weeks.