Austria’s National Immunization Board (NIG) now recommends another booster vaccination (or a fourth Covid shot) for people from the age of 60 and people at risk.

The board said there is still no general recommendation for the fourth dose. However, such a recommendation is expected in autumn, before the cold months.

Until now, the booster vaccination was only recommended from the age of 65. With this amendment, the NIG follows the recommendation of the European Medicines Agency (EMA) and the European Centre for Disease Prevention and Control (ECDC).

The booster vaccination should be “at the earliest four months, but at least from six months after completion of the primary vaccination (three vaccinations) or after a (PCR-confirmed) infection.

Healthy persons aged 12 to 59 can also receive the fourth vaccination at a personal request despite there being no official recommendation.

The Ministry of Health expects the first delivery of around 74,000 doses of the COVID-19 vaccine Valneva in Austria in the next two weeks.

Then the vaccine will also be available for the federal states for retrieval and can probably be used in the vaccination campaigns at the end of August. This expands the vaccine repertoire available in Austria with the first “classic dead vaccine”.

Valneva was developed in France and Austria. “It is the only inactivated whole virus COVID-19 vaccine candidate in clinical trials in Europe”, the laboratory said.

“I hope this will reach some people who have so far been sceptical about the newly developed mRNA vaccines”, Austria’s Health Minister Johannes Rauch (Greens) said.

Austria on Wednesday recorded 6,992 new coronavirus cases after 93,328 PCR tests, according to the Health Ministry.

READ ALSO: UPDATE: What are the fines for not wearing masks on Vienna’s public transport?

There are 1,339 people hospitalised with Covid-19 (33 more than the day before) and 81 in intensive care units. Since the beginning of the pandemic, 19,231 people have died from Covid-19 in Austria.

Just under 60 percent of the population has a valid immunologic protection, meaning they have a combination of vaccination and/or recovered status recognised by the government. 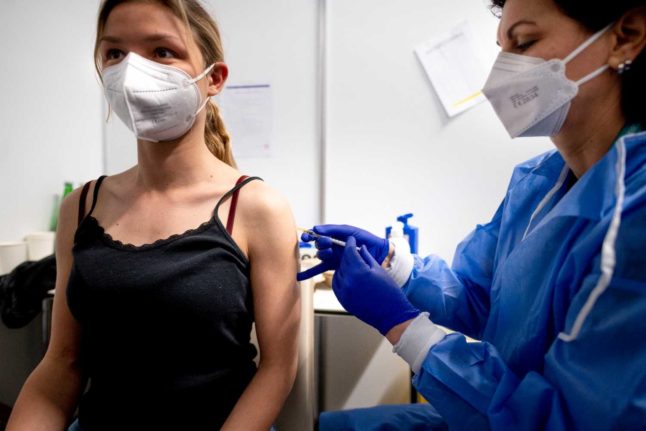 SCHOOLS
Today in Austria: A round up of the latest news on Monday

Company doctors could begin giving vaccinations in May

Company doctors – i.e. in-house doctors serving one or a handful of companies or businesses – should start giving vaccines from the beginning of May as well as vaccination centres and GPs.

The Austrian vaccination plan is back on track thanks to the early Biontech/Pfizer delivery, according to the Ministry of Health’s vaccine coordinator Katharina Reich, Der Standard newspaper reports.

More than two million doses have been administered so far.

The vaccination of the over 65-year-olds has already been completed in many federal states, in May the over 50-year-olds will have their turn and by the end of June everyone should receive a vaccination who wants one.

It is still undecided whether Vienna will open up its museums and retail when its current lockdown expires on 2nd May, broadcaster ORF reports.

A spokesman for the Mayor of Vienna Michael Ludwig (SPÖ) confirmed this yesterday in response to an APA request.

A decision will made on Tuesday. It is also unclear if Vienna will open its restaurants and hospitality when Austria opens up its gastronomy, culture, tourism and sport on 19th May.

Experts concerned about plan to open up Austria in May

However, she warns against unlocking in regions such as Tyrol where a virus mutation is circulating.

Microbiologist Michael Wagner thinks the opening plan is “too risky”, it is reported. APA reports the traffic light commission chairman Ulrich Herzog said that the current situation shows parallels to that in autumn, when the number of infections subsequently increased explosively.

One million people tested for coronavirus with gargle tests

Around one million people have been tested for coronavirus using Vienna’s gargle tests according to Der Standard newspaper. Of these, 0.56 percent were positive, meaning 5,748 Covid infections were detected.

The seven day incidence, or number of coronavirus infections per 100,000 people is is 182.

Children return to school in Vienna and Lower Austria

All schoolchildren are returning to schools in Vienna and Lower Austria today, broadcaster ORF reports. Until May 16, elementary schools will receive face to face classes, while children will be taught in shifts at middle schools, special schools, AHS, vocational schools and vocational schools – with the exception of those in the final year of school.

Austria 16th for start up financing in Europe

The total amount of the publicly known financing rose in from €183 to €212 million. The crypto trading platform Bitpanda received the most funding in Austria, €45.6 million, followed by the construction app company Planradar with €30 million euros and the marketing data start-up Adverity with €26.3 million.

A draft for the climate protection law planned by the ÖVP and the Greens provides for automatic tax increases should CO2 emissions deviate from the climate targets set, Die Presse newspaper reports,  picking up on reporting originally in the Krone newspaper.

Environment Minister Gewessler confirmed on Sunday in the ORF “press hour” that this was a proposal from her department to prevent climate targets from being missed again as in the past. Gewessler said if the government did not act it could cost €9 billion by 2030.

The Austrian fund volume of sustainable investment funds increased in the first quarter by around €2.7 billion to €20.1 billion euros Die Presse newspaper reports.

The net inflows of the sustainable investment funds amounted to around €1.8 billion.

Die Presse newspaper argues the sustainability trend is also an argument for the industry to make actively managed funds attractive to investors, because active funds generally generate more money for the banks than passive ETFs, which only track an index.