This is a question that we put to readers of The Local following recent debates about the topic. Here’s what international residents in Austria had to say.

Austria’s neighbour, Germany, is well-known for its stretches of speed limit-free motorways.

But driving rules in the Alpine Republic are a bit more reserved with a national maximum speed limit of 130 km/h on the Autobahn.

For some people in Austria, this is already too fast with calls for the limit to be set at 100 km/h - both for safety and to mitigate the impacts of driving on the environment.

Whereas for others, the 130 km/h rule is archaic and should be raised to become more in line with Germany.

We asked our readers what they thought about the possible rule change. With 81 responses, the question certainly struck a nerve among readers.

A slight increase, "but not Germany fast"

The most popular option was to raise the speed limit to 140 km/h, with 37 percent saying yes to going a little bit faster on the Autobahn.

Gerald Stapleton in Maria Alm, Salzburg, said: “When the speed limit was introduced, cars were much less safe than they are now. 140 kph is the new 130 kph!”

One respondent in Vienna, said: “Roads are good enough to allow 140km/h to be implemented.” 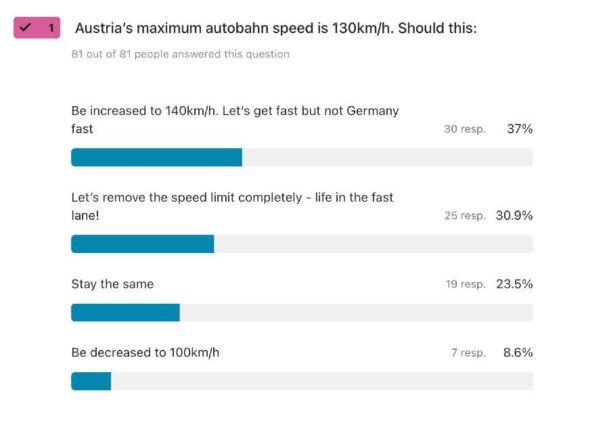 Alternatively, Scott in Salzburg suggested a compromise: “The speed limit could be reduced to 120 km/h in larger cities, for example in Salzburg and Linz, and then increased back up to 140 km/h.”

While a respondent in Styria said: “It’s safe enough.”

Out of 81 responses to the survey, 30.9 percent said they would like the speed limit to be completely removed to embrace life in the fast lane.

When asked why, Tito in Vienna put it simply with: “YOLO [you only live once].”

In another suggestion of a compromise, Aaron in Klagenfurt called for an unlimited speed limit but “with exceptions near cities and in more curvy areas.”

Safety (and the environment) first

Only 8.6 percent voted in favour of decreasing the speed limit on the Austrian Autobahn to 100 km/h, but it did generate some of the most animated responses - especially due to environmental and safety concerns.

Iiro Niinikoski in Salzburg, said: “Austrians are very bad and hasty drivers, always in a hurry. The lower the limits, the better!”

READ ALSO: COMPARE: Which countries in Europe have the strictest drink-drive limits

One anonymous respondent, who compared the debate to a similar movement in the USA, said: “The reduction in the 1970s in the USA from 60 mph (miles per hour) to just 55 saved considerable lives as well as petrol. It was a noticeable change that helped the US overcome the energy crisis of the 70s. Note that a reduction to 100 km/h is still 62 mph, so it would remain quite high.”

Vitor in Vorarlberg also argued in favour of reducing the speed limit to save fuel and said: “Higher speed limits will only increase fatalities on the roads and fuel consumption. Helping almost nothing to save time.”

Similarly, Matt in Vienna said: “With the need for efficiency, we should either slow down or use public transport.”

Finally, 23.5 percent of respondents believe the speed limit on Austrian motorways should stay the same at 130 km/h.

Jim in Tyrol put it succinctly with: “It’s fast enough.”

But Michael Herridge in Upper Austria went further and said: “Austrians are mad drivers. Removing or raising the speed limit is dangerous.”

Another anonymous respondent added: “Many Austrians are reckless drivers. Keeping the same limit is a good compromise between being environmentally friendly and safe.”