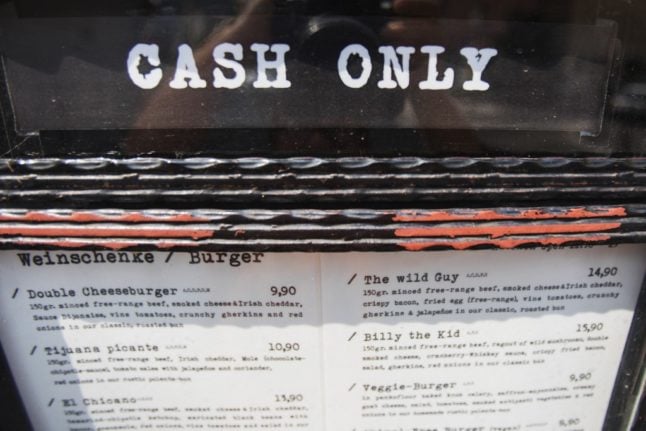 The lettering "Cash only" can be seen above the menu of a restaurant in Vienna.(Photo by ALEX HALADA / AFP)

The inflation rate for June 2022 is expected to be 8.7 percent, the Statistics Austria institute calculated as part of a flash estimate.

Compared with the previous month, consumer prices rose by 1.4 percent, Statistics Austria said. This is the highest level since 1975 or almost 50 years.

The wave of inflation has affected mostly energy and food prices in Austria but has now also arrived in the gastronomy sector, with increasing costs in bars and restaurants in the country.

“Inflation has picked up speed in almost all areas. In addition to recent increases in fuel and heating oil prices, we also see significant increases in restaurant and food prices”, according to Statistics Austria Director-General Tobias Thomas.

The main culprits of rising food prices in retail and restaurants are the more costly energy and fuel prices. As transport and production become more expensive, these increases cascade to gastronomy as well.

“The war in Ukraine and China’s zero-covid strategy continue to put a massive strain on global supply chains,” said Rainer Will, Managing Director of the Trade Association, in a press release.

“We do not expect inflation to peak until the end of the year.”

Rising costs have already reached other sectors, including rental prices, as The Local reported.

Austrian Post has also said that there will be price adjustments in the parcel sector “in the foreseeable future”, though they have added that these will be “very moderate”.

Criticism from the opposition

The SPÖ, FPÖ and the Neos accuse the government of doing too little against inflation.

“There is not even a draft law for the abolition of the cold progression,” criticised Neos economic and social spokesman Gerald Loacker. “The government’s one-off payments help little to nothing,” said SPÖ social spokesperson Josef Muchitsch.

FPÖ leader Herbert Kickl spoke of “failure to help”. “The ’emergency measures’ decided in the special session the week before do not even deserve the name – the first money will not flow until August 2022 at the earliest.”, he said.

The federal government has announced a broad package to help ease rising cost of living with one-off payments and the end of the so-called “cold progression” when tax brackets do not take into account inflation changes.

The quick estimates of Statistik Austria are based on the existing database at the time of publication, which includes about 80 to 90 percent of the prices necessary for the inflation calculation.

There may, therefore, still be deviations. For example, the quick estimate of inflation for May was initially 8.0 percent, but the value was later revised downwards to 7.7 percent.

The index level of the consumer price index and further results for June 2022 will be announced on July 19th 2022.