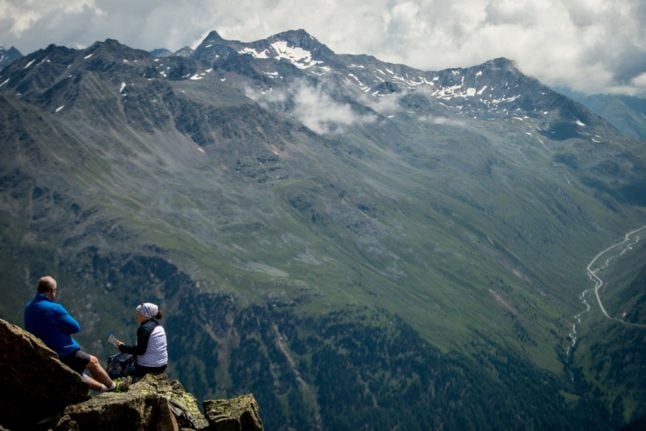 Hikers take a break on the top of the Gaislachkogl Mountain (3050m) in the Tyrol region in the heart of the Austrian Alps, on July 11, 2018. (Photo by VLADIMIR SIMICEK / AFP)

A bright sunny day may seem like the perfect time to explore the Austrian mountains, but if you are not careful, you might have a heavy bill to pay.

This is what happened when a group of more than 100 German school children and teachers had to be rescheduled in Tyrol. The costs of airlifting and caring for most of them after the hiking trek they found online was not as easy as the website advertised could reach around €18,000.

Most of it will be sent directly to the school, which presumably had its own insurance, since Austria has a strict policy when it comes to air rescues – even if you have public mandatory health insurance, such as ÖGK.

A very significant exception to what the public insurance, such as the Österreichische Gesundheitskasse (ÖGK) covers in Austria are air rescue.

The ÖGK does state it will pay the costs of domestic transport by aircraft if the patient is in danger of death, and the urgency calls for air transport – as long as the medical necessity is proven by a doctor and recognised by the company.

However, the insurance highlights that this does not include “accidents in the practice of sport and tourism on the mountain” – a not-so-rare occurrence in an Alpine country.

This means that if you suffer an accident in the streets of Vienna and need to be airlifted to a hospital, ÖGK will likely cover that bill. But if you have the exact same accident while biking on a mountain, your home address will be printed on that bill.

The “appropriate precautions”, according to expert lawyers, would include buying private insurance  – or checking the terms of any insurance policies you already have.

How expensive can it get?

It is very difficult to assess costs because it depends on each situation and how long the services are needed.

In the case of the 99 students and their teachers, the € 18,000 included three flight hours of the police helicopter, one and a half hours of the emergency helicopter, and the “ground presence of the mountain rescuers”, Kurier reported citing specialist estimates.

One story shows that even in case of false alarms, people can be left with hefty bills.

When worried residents saw flashlights high in the Tyrolean Alps they presumed they were emergency calls for help and called out emergency services.

As a result, a couple that was quietly camping in the mountains were surprised when mountain rescue workers turned up.

They were even more shocked to learn they had to pay a bill of more than € 2,000.

“Rescue operations must always be paid by the persons in the supposed emergency, even if they are actually not needed”, Viktoria Haider, an insurance consultant, told ORF.

On average, helicopter rescues cost around €3,500, according to a Kurier report. However, this can increase significantly for complex assignments.

What should you do to avoid high costs?

Whenever travelling, even inside Austria, primarily if you practise winter sports or plan to go for hikes, it is worth considering getting personal insurance with air rescue coverage.

Air rescue, as the case with the children shows, doesn’t extend only to physical accidents but may be necessary if you get lost or thought missing, for example.

Costs for helicopter rescues could add up to thousands of euros. Austria’s compulsory insurance schemes such as ÖGK and SVS will not cover in most cases.

In some cases, home insurers and even credit card insurances can cover travel and health expenses. However, it is still important to check – rather than assume – if this includes air rescue and under which circumstances.

If you are a frequent visitor of the Alps, it might be worth checking associations such as the Austrian Alpine Association, the Austrian Ski Association (ÖSV) or the ÖAMTC, with yearly membership fees that include insurance.

“With the continued spread of monkeypox in Europe, we will expect to see more deaths,” Catherine Smallwood, Senior Emergency Officer at WHO Europe, said in a statement.

Smallwood emphasised that the goal needs to be “interrupting transmission quickly in Europe and stopping this outbreak”.

However, Smallwood stressed that in most cases the disease heals itself without the need for treatment.

“The notification of deaths due to monkeypox does not change our assessment of the outbreak in Europe. We know that although self-limiting in most cases, monkeypox can cause severe complications,” Smallwood noted.

The Spanish health ministry recorded a second monkeypox-related death on Saturday, a day after Spain and Brazil reported their first fatalities.

The announcements marked what are thought to be the first deaths linked to the current outbreak outside Africa.

Spanish authorities would not give the specific cause of death for the fatalities pending the outcome of an autopsy, while Brazilian authorities underlined that the man who died had “other serious conditions”.

“The usual reasons patients might require hospital care include help in managing pain, secondary infections, and in a small number of cases the need to manage life-threatening complications such as encephalitis,” Smallwood explained.

According to the WHO, more than 18,000 cases have been detected throughout the world outside of Africa since the beginning of May, with the majority of them in Europe.

The WHO last week declared the monkeypox outbreak a global health emergency.

As cases surge globally, the WHO on Wednesday called on the group currently most affected by the virus — men who have sex with men — to limit their sexual partners.

Early signs of the disease include a high fever, swollen lymph glands and a chickenpox-like rash.

The disease usually heals by itself after two to three weeks, sometimes taking a month.

A smallpox vaccine from Danish drug maker Bavarian Nordic, marketed under the name Jynneos in the United States and Imvanex in Europe, has also been found to protect against monkeypox. 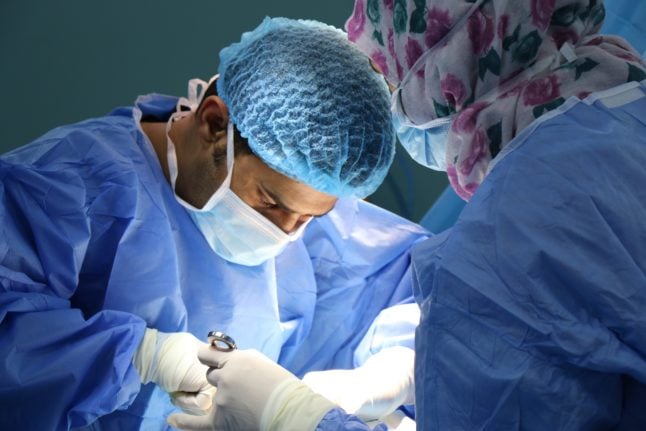