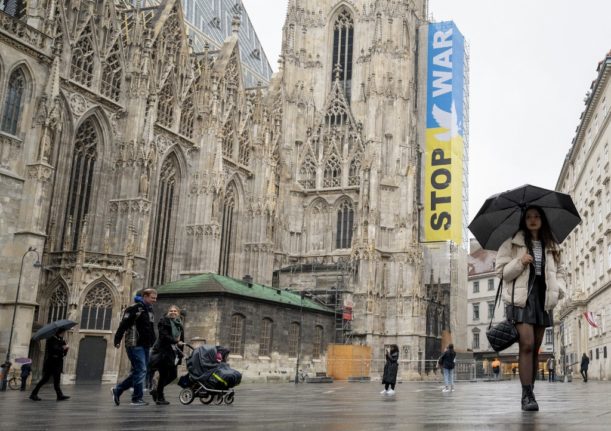 It's going to be gloomy and rainy today in Austria. (Photo by JOE KLAMAR / AFP)

Covid rules remain in place in schools and universities

As The Local reported on Monday, despite the easing of coronavirus rules in many areas in Austria, rules on masks in schools and universities will remain in place for the time being.

However, there will be other changes. From this week only one PCR test per week will be carried out in schools. The “Ninja Pass” which recorded negative tests in schools has also been retired. Previously it was used by children to access leisure and sports activities.

However, the rise in prices will bring the state billions of additional revenue from value-added tax, wage tax and income tax.

Agenda Austria modelled several scenarios, finding the national budget for Austria could be boosted by between 7.5 and 11 billion euros this year and next year – the equivalent of a major tax reform.

The new President of the Tyrolean Medical Association, Stefan Kastner, has spoken out against reintroducing compulsory coronavirus vaccinations, broadcaster ORF reports. He said mandatory vaccination would only be necessary in the case of a new variant of the disease.

In the interview with APA he also said that Austria’s quarantine rules were no longer necessary, and suggested people with symptoms might be relied upon to self-quarantine.

NEOS calls once more for President Zelensky to address Parliament

The Austrian opposition party NEOS have made a renewed attempt to get the Ukrainian President Volodymyr Zelensky to address the Austrian parliament, with the party stating it was now needed “more than ever” after the discovery of war crimes in Bucha, broadcaster ORF reports. Previous attempts for an address have failed as the opposition FPÖ party would not agree to it.

Call for public beaches at Lake Attersee to be protected

The Green party has applied to Austria’s Parliament for the state to take over current public swimming areas at Attersee Lake. Austria’s Green Party fears that the free access to the lake will be lost if further lakeside beaches are leased to private bidders.

Broadcaster ORF reports only 13 percent of the lake shore is  now accessible to the public and the rest is privately owned. The state councillor Markus Achleitner (ÖVP) says that the state is in close coordination with the federal forests in order to preserve the free public lakeside areas for the general public and to expand them again.

Austria’s Stone Age eleven centimetre-tall statue, known as the Venus of Willendorf, is no longer believed to be a sex symbol, according to history experts.

The 25,000-year-old statue, which is on display at Vienna’s Natural History Museum, was previously believed to be a fertility or sex symbol.

However, the most recent interpretation is that she represents a wise old grandmother, broadcaster ORF reports.