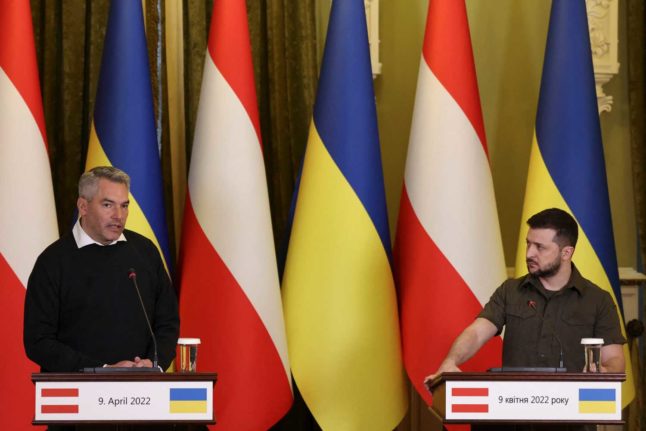 Karl Nehammer said he would meet with Russian President Vladimir Putin, and is expected to raise alleged war crimes in devastated areas around Kyiv that were under Russian occupation, including the town of Bucha.

Ukrainian authorities say over 1,200 bodies have been found in the area so far and that they are weighing cases against “500 suspects” including Putin and other top Russian officials.

Russian forces are now turning their focus to the Donbas region in the east, where Ukrainian President Volodymyr Zelensky said Russian troops were preparing “even larger operations”.

Russia is believed to be seeking a link between occupied Crimea and Moscow-backed separatist territories Donetsk and Lugansk in Donbas.

“They can use even more missiles against us… But we are preparing for their actions. We will answer,” Zelensky said.

Lugansk governor Sergiy Gaiday warned that the region could suffer as badly as Mariupol, a besieged port city that even pro-Russian authorities say has been 70 percent ruined by fighting.

“The battle for Donbas will last several days, but during these days our cities may be completely destroyed,” Gaiday said.

In a later Telegram message, he said Russian troops knew that “there is no surviving critical or any other infrastructure in our area”.

“Therefore, every shelling of the housing stock is a deliberate terrorist attack.” – ‘War on civilians ‘ – Over the weekend, ongoing attacks on the region hampered evacuations, and 12 people were killed in and around northeast Kharkiv, regional governor Oleg Synegubov said.

“The Russian army continues to wage war on civilians due to a lack of victories at the front,” Synegubov said on Telegram.

In Dnipro, an industrial city of around a million inhabitants, a rain of Russian missiles nearly destroyed the local airport, causing an unknown number of casualties, local authorities said.

Gaiday said a missile strike on a railway station in the city of Kramatorsk on Friday, which killed 57 people, had left many afraid to flee.

Russia has denied involvement in the strike. He estimated just 20 to 25 percent of the local population remained, with “fewer and fewer” now evacuating.

Over the weekend, nearly 50 wounded and elderly patients were transported from the east in a hospital train by medical charity Doctors Without Borders (MSF), the first such evacuation since the attack on the Kramatorsk station.

Electrician Evhen Perepelytsia was evacuated after he lost his leg in shelling in his hometown of Hirske in Lugansk.

“We hope that the worst is over — that after what I’ve been through, it will be better,” said the 30-year-old after arrival in the western city of Lviv.

On Monday, the Chairman of the Board of Ukrainian Railways Alexander Kamyshin said another railway station in the east had been attacked overnight.

“They continue to aim at the railway infrastructure,” he wrote.

On the diplomatic front, EU foreign ministers meet Monday to discuss a sixth round of sanctions, with concerns that divisions over a ban on Russia gas and oil imports could blunt their impact.

Austria is an EU member, but does not belong to NATO, though Nehammer’s spokesperson said Brussels, Berlin and Kyiv had been informed about the trip to Moscow.

The chancellor decided to organise the meeting after he met Zelensky in Kyiv on Saturday, his office said. He wants “to do everything so that progress towards peace can be made” even if the chances of success are minimal, the spokesperson added.

“We are militarily neutral, but have a clear stance on the Russian war of aggression against Ukraine,” Nehammer tweeted, calling for humanitarian corridors, a ceasefire and a full investigation of war crimes.

US President Joe Biden meanwhile will hold virtual talks on Monday with Indian Prime Minister Narendra Modi, just weeks after saying India had been “shaky” in its response to the invasion. A US spokeswoman said the two leaders would consult on ways to offset the “destabilising impact (of the war) on global food supply and commodity markets”.

The World Bank warned Sunday that Ukraine’s economy would collapse by 45.1 percent this year — a much bleaker outlook than it predicted even a month ago — while Russia would see an 11.2 percent decline in GDP.

Ukraine’s allies have sought to pile pressure on Moscow over allegations its troops carried out war crimes in areas around Kyiv, and there has been little sign that intermittent peace talks are progressing.

The Pope has urged an Easter ceasefire, denouncing a war where “defenceless civilians” suffered “heinous massacres and atrocious cruelty.”

Ukraine’s Foreign Minister Dmytro Kuleba on Sunday accused the Kremlin and Russian media of laying the groundwork for war “for many years”.

“Russian political elites and propaganda have been inciting hatred, dehumanising Ukrainians, nurturing Russian superiority and laying ground for these atrocities,” he tweeted.

But in an interview with NBC’s “Meet the Press”, Kuleba said he was still open to negotiating with the Russians.

“If sitting down with the Russians will help me to prevent at least one massacre like in Bucha, or at least another attack like in Kramatorsk, I have to take that opportunity,” he said.

Bucha — where authorities say hundreds were killed, some with their hands bound — has become a byword for the brutality allegedly inflicted under Russian occupation.

But other villages, towns and roads on the northwest flank of Kyiv have their own tragedies.

An AFP reporter saw at least two corpses inside a manhole at a petrol station on a motorway outside Kyiv on Sunday, in a mix of civilian and military clothing.

A distraught woman peered in before breaking down, clawing at the earth and wailing: “My little son.”