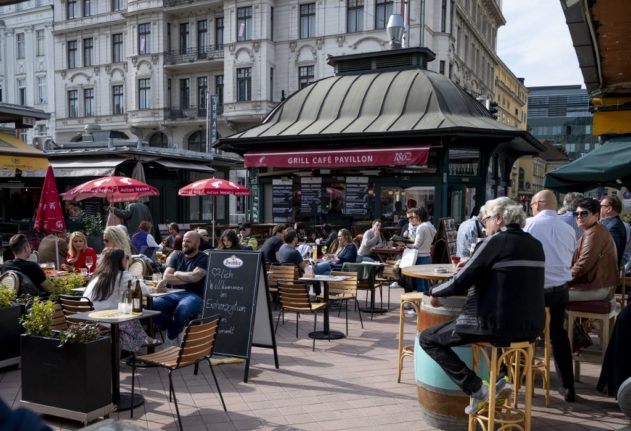 Spring is here and it's nearly the weekend. (Photo by JOE KLAMAR / AFP)

Could masks not be needed after Easter?

Austria may drop its FFP2 mask rules after Easter if infection numbers continue to fall, the Krone newspaper reports, after speaking to the virologist Dorothee von Laer. The regulation to wear masks indoors is currently in place until April 16th (Holy Saturday).

Currently, people must wear a mask in Austria when in hospitals, old people’s and nursing homes, in public indoor spaces, on public transport, in hotels and at work.

However, the virologist urged people to take personal responsibility if this happens, citing Asia as a good example. The next mask requirements rules will depend on how numbers of infections and hospital patients develop over the coming weeks.

Austrian Finance Minister Magnus Brunner (ÖVP) has re-emphasised his rejection of a gas embargo, during an interview with Der Standard newspaper, due to a belief that “if we run out of gas, industry and suppliers would suffer greatly, including the economy as a whole”.

He said Austria was even more reliant on Russian gas than Germany. In the same interview he said he was open to a reduction of the mineral oil tax in view of high fuel prices, which could be around an 8 cent reduction on diesel and 15 cents on petrol. However, he said this may not find favour with the Greens, which govern Austria in coalition with the ÖVP party.

The club chairwoman of the Green Party in Austria, Sigrid Maurer, was physically attacked on Thursday evening in Vienna by a 26-year-old Austrian man suspected of opposing Austria’s measures to combat the Covid-19 pandemic.

The man first attacked her verbally and then hit her in the face with a glass, according to Maurer’s press spokesman. She was not injured and her attacker has been arrested, broadcaster ORF reports.

Chancellor Karl Nehammer tweeted he condemned the “cowardly attack” and said: “violence can and must never be a means in political debate,” he said.

Green Party leader and Vice Chancellor Werner Kogler also expressed his outrage, along with the Mayor of Vienna, Michael Ludwig.

Austria is downgraded from ‘liberal democracy’ in report

According to the annual democracy report  of the Varieties of Democracy Institute (V-Dem) of the Swedish University of Gothenburg, Austria has been downgraded from a “liberal democracy” to an “electoral democracy”.

This means that although citizens are allowed to cast their votes, there are no longer optimal conditions for a democracy in the state.

Austria has fallen behind on the “indicator for transparent laws” and “predictable enforcement”, according to the report.

Vienna’s councillor for education Christoph Wiederkehr (NEOS) has called for Ukrainian teachers who have fled the country due to war, and want to teach, to be allowed to bypass bureaucracy and work in Vienna’s schools to help deal with the influx of refugee schoolchildren in the capital.

Speaking to the Wien Heute programme he said there are  already more than 70 teachers from Ukraine who have fled to Vienna, would like to work and are on the waiting list.

Education Minister Martin Polaschek (ÖVP) recently announced on ORF radio that Ukrainian teaching staff could at least work as support in German classes after Easter, but Wiederkehr said this was not enough for him. He also called for extra funding to pay for the extra children. “Within a week we got 500 additional Ukrainian children in classes in Vienna alone,” he said.

Still possible for artists to apply for hardship funds

Although most pandemic support for art and culture finished at the end of March 2022, it is still possible for people to make applications to the bridging fund for artists until April 30th. Applications to the artists’ social security fund (KSVF) are possible until June 30th, and for  the hardship fund until May 2nd.

The federal government spent 448 million euros from Covid-19 funds on the arts and culture sector during the pandemic, not including short-time work, compensation for losses and the loss bonus.

The State Secretary announced that 155.9 million euros had been paid out through the bridging fund for artists alone, enabling a total of 10,005 people to be supported. Only 3.6 percent of the applications made were rejected, broadcaster ORF reports.