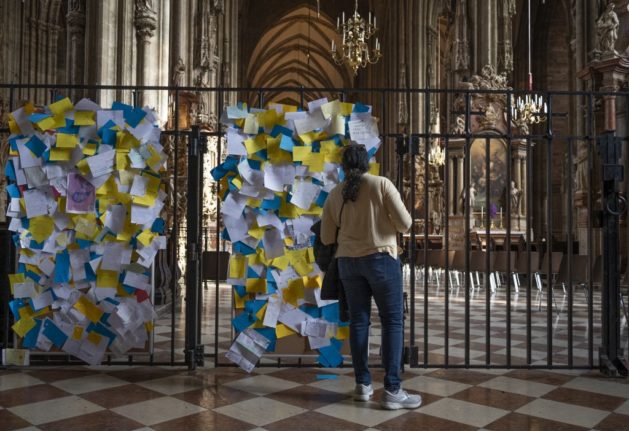 People have been posting notes supporting Ukraine during the war with Russia at Saint Stephen's cathedral in Vienna. (Photo by JOE KLAMAR / AFP)

The number of Covid-19 cases should halve in a week

Covid-19 infections are now noticeably falling in Austria, and the Covid-19 forecast consortium believes the number will almost halve by next week. The number of infected people treated in hospitals should also decrease.

According to the forecast, the seven-day incidence should drop from its current figure of 1,260 to 740 by Wednesday next week, though a fluctuation is possible within a range of 590 to 980.

The positive rates have not increased in any state, meaning that reducing testing is not a factor in the falling numbers. Testing is also decreasing, last week around 810,000 tests were carried out on Wednesday, whereas one week later, around 361,000 tests were made.

READ MORE: How tourists, visitors and residents can get free Covid tests

Austria’s Federal President Alexander Van der Bellen met the Irish President Michael D. Higgins at Vienna’s Hofburg. Following the meeting, Van der Bellen said the war crimes in Ukraine could “not be tolerated”, and said Austria would not “back down” until the bloodshed is over.

Van der Bellen conceded that Austria has so far been against possible EU import embargo for Russian gas, but said there were different levels of dependency on Russian gas among EU countries and it was necessary not just for households but for industry.

Higgins and Austria’s Vice Chancellor Werner Kogler (Greens) also discussed the role of neutral countries such as Ireland and Austria against the background of the Ukraine war.

“Our joint, European response to this proves that we are taking united action against aggressors and that, even as neutral countries, we do not shy away from repelling the Russian attack with all available political means and with tightened sanctions,” said Kogler.

A company which makes Austria’s mandatory FFP2 masks in Vorarlberg has now started a new recycling system. This will give people the option to dispose of masks so they can be reused for oil absorbing textiles or as a cushion filler.

Around 1.2 million people in Austria are seriously overweight

Around 16.6 of Austria’s population are severely overweight according to research carried out by the Institute for Advanced Studies (IHS). Half the population is either overweight or obese – around 2.5 million people.

Austria’s press has been intrigued this week by an anonymous letter claiming two bodyguards of Austria’s Chancellor had crashed a car while drunk, in addition to allegations that the bodyguards carried out childcare duties, personal errands and enjoyed drinking with the chancellor’s family.

Chancellor Karl Nehammer was so infuriated by the report and the opposition SPÖ subsequent parliamentary questions that he called a press conference and said “a red line in the political debate” had been crossed,” in “in which the untruth is alleged and the safety of my family is massively endangered”, broadcaster ORF reports.

Now the Krone newspaper has found out the driver of Vice Chancellor Werner Kogler (Greens) also crashed his car in a parking lot in March.

In this case, the driver had not been drinking.

Later on Monday, Kneissl announced her resignation – although it is unclear what impact this will have on the sanctions process.

Austrian media reports the rule includes an annual salary of 515,000 euros. The EU Commission could include her on the sanctions list, which could soon mean her assets are frozen and her bank accounts are blocked.

Former German Chancellor Gerhard Schröder has left his position with the firm after sanctions were threatened.

Note: this story was updated on Monday afternoon after Kneissl quit her board position at Russian oil giant Rosneft.