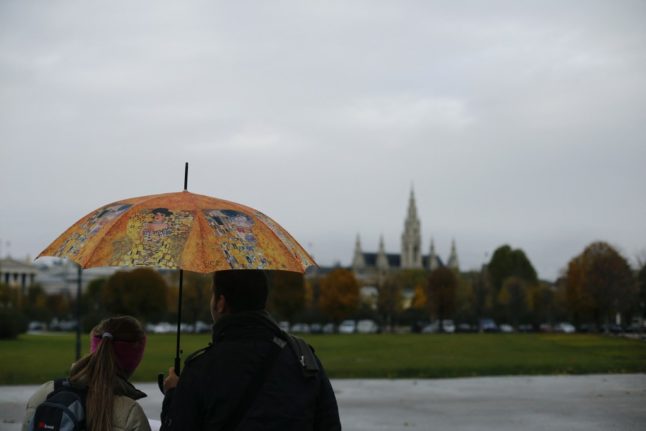 Rain is on the way following weeks of sunshine in Austria. (Photo by ALEXANDER KLEIN / AFP)

Rain on the way in Austria

Austria’s long drought is coming to an end, with rain and snow expected at the end of the week and temperatures dropping by as much as 20 degrees. It has not rained for six weeks in Carinthia and southern Styria. In Graz it has not rained for 40 days.

This March has been the sunniest in Austria since 1953, broadcaster ORF reports, and the dry weather has even led to a number of forest fires.

However, the long period of high pressure is due to come to an end on Wednesday, and it will get chillier as April begins on Friday.

Financial help due to Covid-19 pandemic will end soon

Financial help for Austrian businesses due to the Covid-19 pandemic, such as hardship funds and help with short term work, is due to end in April, although many sectors such as city tourism are still struggling. Bridging finance and help for events will still be available until mid June.

The Krone newspaper says negotiations with the government about continued financial aid are still going on behind the scenes.

The newspaper reports Austria’s tourism businesses have received a total of 4.8 billion euros since the beginning of the pandemic. More than 700,000 requests have been made for Austria’s default bonus (Ausfallbonus).

This bonus provided up to 80,000 euros for any company which suffered more than 40 percent of loss of sales in any month from November 2020 to June 2021.

The existing short-time work arrangements, in which the employer receives full reimbursement of the costs from the state and where the minimum working time was 30 percent, will also change at the end of March.

From April, at least 50 percent of business hours must be worked. However, those affected by Ukraine crisis can apply for short-time work until the end of June.

Russia is threatening to stop sending gas to “unfriendly” countries which refuse its demand for payments in roubles.

Putin’s spokesman Dmitry Peskov told the TV station PBS that Russia would not send gas for free, stating “no payment, no gas”. So far energy companies of the G7 nations have rejected these Russian demand for payments, including the Austrian OMV oil, gas and petrochemical company.

In the same interview Peskov ruled out Russia using its nuclear weapons in the war in Ukraine.

It is too early to say if this could become necessary in autumn. At the moment, people aged over 65 and those with a weakened immune system are encouraged to register for a fourth jab. Wiedermann-Schmidt said a Covid-19 infection in addition to three doses of the vaccine could provide equivalent immunity, according to broadcaster ORF.

Austria’s Interior Minister Gerhard Karner (ÖVP) has spoken out against a mandatory distribution of refugees from Ukraine within the EU in Brussels following a meeting with his European counterparts. He said this was not even mentioned in talks, although the German Minister for the Interior has suggested it should be a goal.

However, he supports helping nearby countries such as Poland. Austria has already flown some refugees out of Moldova and will take in 500 displaced Ukrainians from Poland. It may end up taking up to 3,000 displaced people from Poland in total, ORF reports. Significantly more refugees are expected to come to Austria if the war continues.

Private kindergartens in Vienna will be closed on Tuesday due to strike action. Kindergarten workers will march from the Votivpark to Heldenplatz to demand better working conditions, more pay and more skilled workers.

Staff report they feel burned out and exhausted following the Covid-19 pandemic. The strike will affect more than 90,000 children who are cared for by 7,600 employees in Vienna’s private kindergartens, after-school care centres and all-day schools.