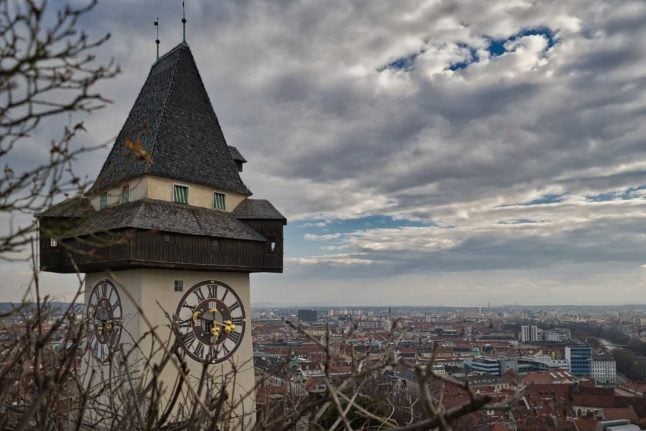 A tower in Graz. References to Osterrachi are over 1000 years old. Image: Pixabay

The first mention of Ostarrîchi appears in a document of Emperor Otto III from 996, kept in the State Archive of Munich.

Both the Germanic and the Latin version of the name mention the country’s geographical position in relation to what was, at the time of the first references, an area belonging to the Duchy of Bavaria, in the case of the Germanic references, or the Eastern borders of Charlemagne’s empire, the Frankish king crowned emperor in 800 who ruled over most of Western and Central Europe until he died in 814.

The Eastern lands were called like this by many kingdoms of different languages, and there are numerous references to Ostarrîchi, Osterlant, Ostergau, Ostmark, and finally Österreich throughout history.

The latinisation, or the changes in spelling for the benefit of Latin speakers, of the old German words that created Österreich resulted in the region being referred to as Austrie marchionibus. This name does not have a Latin origin but derives from the old German ôstar, “in the east”.

Austrie, and Austria, may remind people of another country with a similar name: Australia.

There’s no lack of jokes between both countries (and you can find T-shirts in Austria reiterating that the country has no kangaroos), but Australia did also get its name from Latin words.

All Germanic languages other than English have a name for Austria that corresponds to Österreich, including the Dutch Oostenrijk.

In most other languages, either Austria or a phonetic equivalent was adopted, including in Portuguese, Hungarian, Italian, Spanish, Serbo-Croatian, and Greek.

In English, the name Austria shows up in documents from the early 17th century.

There are other theories regarding the origin of the name Ostarrichi. One of them claims the name derives from a proto-Slovenian word Ostriki, to designate “the people from the high mountain”.

Some authors also see similarities and connections made with a Germanic goddess Ostara, but sources for these claims are poor, according to TU Graz.

In 1996, Austria celebrated “1000 years of Austria”, or 1000 years of Ostarrîchi, a millennium after the oldest surviving form of the name in a document was written.

The most widely accepted theory is the reference to the eastern Bavarian lands, primarily since Bavarians had controlled the territory between the eastern Alps and the Wienerwald region for centuries since the mid-500s.