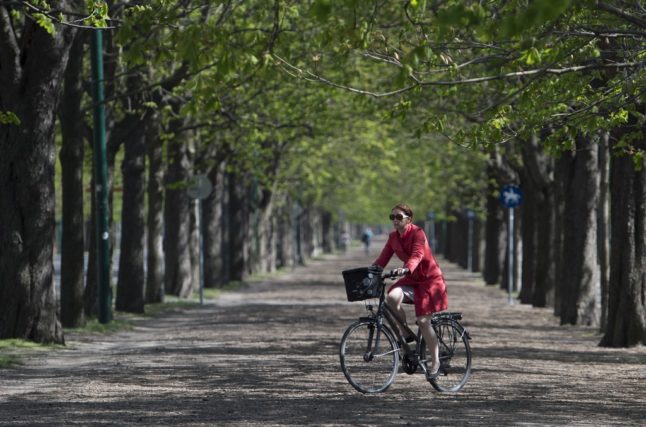 Yet another beautiful sunny spring day awaits us in Austria today. (Photo by JOE KLAMAR / AFP)

Go ahead for 150 euro energy voucher

On Wednesday the National Council, with the votes of the ÖVP and the Greens, decided to offset household energy costs in Austria with a voucher of 150 euros.

The bonus is intended to reduce the next electricity bill by this amount and will apply once for each main residence, but will not be given for secondary residences.

READ MORE: How will the war in Ukraine impact the cost of living in Austria?

Masks are back and quarantine rules have changed

Mask wearing is back in Austria, after new regulations were published a day late on Wednesday. From today (Thursday) until April 16th.

The mask must be worn in public places (indoors), in public transport, in retail, in physical services, in hotels, in sports facilities (except when exercising), at work, in cultural and leisure facilities as well as in hospitals, retirement and nursing homes. In gastronomy, the mask can be removed while seated.

Masks are not compulsory in private living areas.

It will also be possible for people to leave quarantine without a negative test if they have been symptom free for 48 hours.

The catch is the person must wear a mask in all contact with others and must not enter health facilities, restaurants or cafes, gyms or major events. People can still go to work as long as  an FFP2 mask is worn at all times.

Austria’s Corona traffic light commission continues to classify the country as dark red or high risk on the traffic light system. With the exception of Tyrol, the number of Covid-19 cases has increased all federal states. Vienna has shown the strongest increase of 18 percent.

Will Ukrainian President Volodymyr Zelensky be invited to speak to the Austrian parliament?

However, the SPÖ politician Jörg Leichtfried said on Wednesday the party would not stand in the way of the invitation. According to the rules of procedure of Austria’s National Council, Zelensky can only be invited with the agreement of all  political parties.

Nehammer on Russian sanctions: ‘Austria is and will remain neutral’

Can Austria reduce its dependency on Russian gas?

The Ukraine war has exposed how reliant Austria is on Russian gas – but according to experts, it may be possible for it to reduce this dependency before long, broadcaster ORF reports.

The EU Commission wants to present a proposal by mid-May to reduce dependence on Russian gas imports by 2027.

The EU’s new energy policy, REPowerEU, already envisages reducing Russian gas imports by almost two-thirds by the end of the year and partially replacing them with liquefied natural gas (LNG) from non-Russian suppliers. A switch to renewable energies is also planned.

However, according to Austria’s Federation of Industry (IV) there is no short term alternative to gas from Russia.

IV boss Georg Knill said Austria must not “recklessly jeopardize its own energy supply”,  in a press release.

Austria is aiming for all its electricity to be from renewable sources by 2030. However, a Court of Auditors (RH) found in 2021 that Austria would miss this target on the basis of measures it has taken so far. It also found greenhouse gas emissions in Austria increased by five percent from 1990 to 2017, while they fell by almost a quarter on average in the EU.

Austrian environmental organisations are calling for greater use of biogas, better renovation of existing buildings, and more use of solar energy.

There should also be an expansion of wind and geothermal energy. Vienna wants to end its use of gas by 2040, and is building the largest large-scale heat pump in Europe in Simmering, ORF reports.