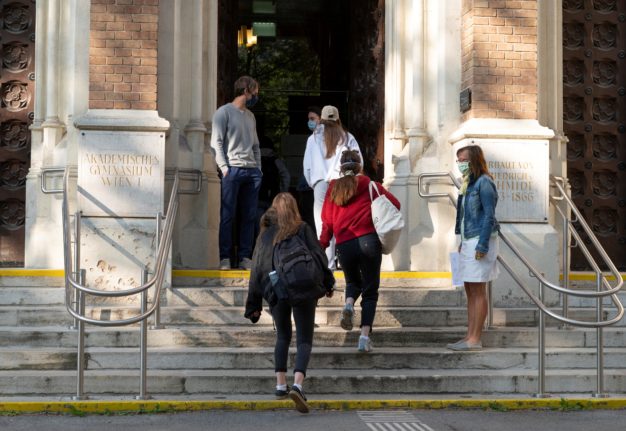 The Federal Government has announced there will be no changes to Austria's current FFP2 mask rules for schools. (Photo by JOE KLAMAR / AFP)

Austria’s current FFP2 mask rules for schools will remain unchanged for now, despite calls from some politicians to tighten the mandate.

This was confirmed on Thursday by Minister of Education Martin Polaschek of the Austrian People’s Party (ÖVP) at a press conference in Vienna.

The current rules require students to wear an FFP2 mask when moving around the school but not while sitting in a class. It is similar to the rule applied to other public indoor spaces and gastronomy.

Speaking about the rule for schools, Polaschek said: “We will definitely keep this rule until the Easter holidays.”

Governor of Upper Austria Thomas Stelzer (ÖVP), recently called for the mask rule in schools to be tightened due to rising Covid-19 case numbers in schools across the country.

In addition to the mask rule, pupils and teachers are also required to test for Covid-19 three times a week.

What are Austria’s current Covid measures?

From a nationwide vaccine mandate for every citizen earlier in the year which was subsequently scrapped, Austria has gradually relaxed Covid measures in recent weeks.

However, the ad hoc manner in which this has taken place, along with the different rules in place in different states, has made this difficult to follow.

The so-called spring awakening, when most restrictions were lifted, happened on 5th March, with swarms of people visiting nightclubs and parties all over the alpine country.

The midnight curfew for restaurants was also lifted as nightclubs, and apres-ski venues were allowed to reopen.

The federal government’s are the minimum standard for rules and regulations, and states in Austria are free to adopt stricter measures.

This is the case of Vienna, as often happened during the pandemic, there is a separate set of rules.

Vienna is keeping the 2G rule to gastronomy, though the mask requirement is waived for staff and customers. There is no more curfew, and night gastronomy is allowed to open, but also with a 2G rule.

More information on the Covid measures in place can be found in the following explainer.