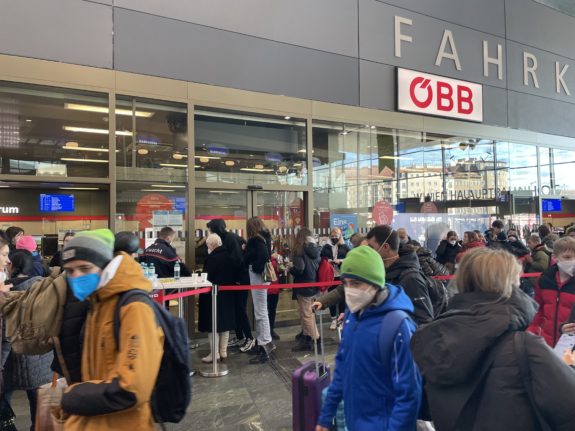 Many refugees from Ukraine are arriving in Vienna. Photo: Emma Midgley.

Since Russia invaded Ukraine, Austria has received some 117,000 refugees fleeing the war, Austria’s Ministry of the Interior confirmed on Monday afternoon.

Only around a quarter of the arrivals, though, currently want to stay in Austria.

But, according to the UN High Commissioner for Refugees (UNHCR), the proportion is likely to increase in the country.

The UN has already warned that the subsequent waves of refugees will be people who do not have any contact points in Western Europe. So far, most of the Ukrainians have travelled from Austria further to Spain, Italy, or Germany, where there are larger Ukrainian communities.

READ MORE: How Vienna is helping thousands of Ukrainian refugees arriving by train

As the war rages on, those arriving might want to stay at their first place of arrival, as they have no other ties to other countries. However, they also tend to be more vulnerable people: those without passports or money, the UN had said.

It has been difficult to measure how many people have stayed in Austria and even how many have arrived.

This is because Ukrainian citizens don’t need to register for short-term stays in Austria. Besides, many have stayed with private households, friends, or even short-term rentals.

Starting this Monday, 14, refugees wishing to stay in Austria will be formally registered. They will receive an identity card and basic care.

READ MORE: How Austria and Austrians are helping Ukrainian refugees

The country has set out 34 fixed registration offices where refugees fleeing the war in Ukraine can go for assistance and documentation.