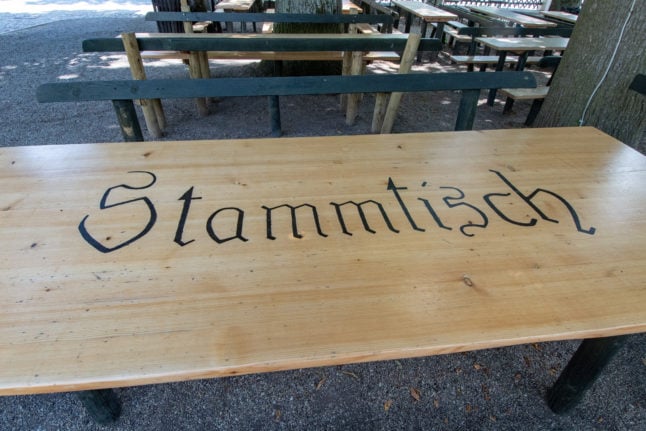 The word Stammtisch written on a table in an outdoor beer garden in Bavaria. Photo: DPA/Picture Alliance

Maybe you’ve seen them — or maybe you’re one of them: the regulars at a pub, café or restaurant, always sitting in the same seats, ordering another drink, giving the owner a hard time and chatting with locals who walk through the door.

If that sounds familiar, you’ve likely gotten a glimpse into the meaning of “Stammtisch.”

Found throughout Austria and Germany, a “Stammtisch” is a regular meeting of friends coming together to enjoy a comfortable atmosphere and talk idly about anything and everything, typically beer-in-hand.

Austrian clichés: How true are these ten stereotypes?

The word literally translates to “clans’ table,” and while its meaning has changed over time, at its core is a certain sense of belonging that can be returned to again and again.

What is the history of Stammtisch?

Though you might be able to find a Stammtisch table at any typical tavern, brewhouse or beer hall across Germany and Austria (you may even spot an ornate “Stammtisch” sign signalling who’s who), the tradition isn’t always tied to a physical location. It’s more about the group itself, rather than the table where they meet.

Like any centuries-old tradition, it’s not entirely clear where the practice originated. Researchers Franz Dröge and Gudrun Schwibbe told science magazine Bild der Wissenschaft that it likely began in the 17th and 18th centuries, when artists, writers and thinkers across Europe would congregate in various cafés and bars to exchange ideas and discuss their work.

Later on in the 19th century, the researchers argue, it was the subversive politicians and union organisers who would gather around the table and talk over actions and political problems. The term “Stammtischpolitik,” or “pub politics,” was coined to cast these political discussions in an unfavourable light.

These days, convening at the Stammtisch is simply about joining in community for a good conversation, a game of cards or a drink. The regular tavern-goers of the older generation still exemplify its traditional roots better than anyone else, and many of today’s Stammtisch gatherings harken back to that era.

But the Stammtisch idea has also grown to encompass a wider range of gatherings, often open to the public, that are centred around a specific topic of interest. You might find, for example, a weekly Stammtisch for avid hikers, football players or foreign-language speakers, or a university program that hosts a monthly Stammtisch for its students to attend.

Why do people enjoy the Stammtisch tradition?

A Stammtisch provides a casual setting for people to connect despite ideological differences, where attendees have the opportunity to talk about what interests them. Altogether, it creates a sense of belonging without too much commitment: you don’t have to show up every single week.

Regulars might likewise appreciate the social outlet that a Stammtisch provides. They may attend in order to practice a new language—or to pick up the latest community news and gossip. There’s nothing quite like a full stein to get the chatter flowing!

Whatever the reason for gathering, the communal spirit is at the heart of this tradition. Good food and drink contribute to the comfortable atmosphere, creating that warm feeling of “Gemütlichkeit.”

Can anyone participate in a Stammtisch?

Though you’re likely to receive a volley of confused stares if you try barging your way into a long-running Stammtisch at the local tavern — the truth is, anyone can participate in this tradition.

If you’d like to join a Stammtisch group, try finding one in your area that’s open to the public and focused on a topic you’re interested in. German-learners will find that there are “Stammtische” (the plural) all over the world meeting to practice and perfect their language skills. Meetings are often advertised online, through social media or even posted at the restaurant in question.

If there’s not a gathering in your city or town, consider grabbing some friends or colleagues and starting your own “regulars’ table.”

The table part isn’t so important — all you really need is the people.