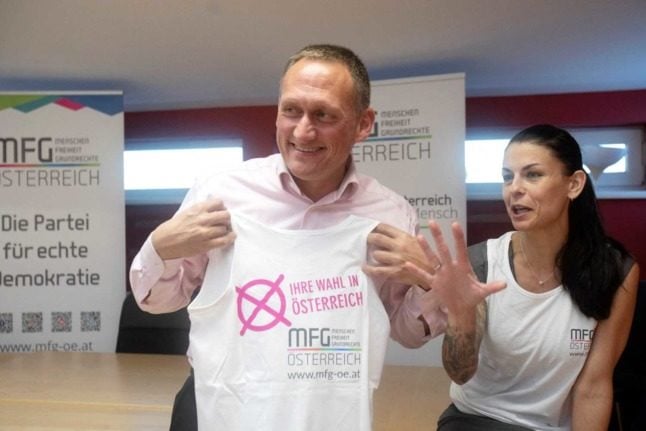 Gerhard Poettler, party founder of the MFG Party (short for People, Freedom, Fundamental Rights), and Dagmar Haeusler, member of the Upper Austrian state parliament and co-founder, pose with a t-shirt during an interview with AFP in Eugendorf, Austria, on January 24, 2022. Photo: ALEX HALADA / AFP

Austria’s new party was founded largely based on protesting Covid restriction measures. Despite measures being wound back, the party is eyeing every election in the country.

This Sunday, it won seats in 47 of the 50 local elections in the state of Tyrol, reaching the third-largest share of the vote in the city of Kufstein.

However, the 22 MFG mayoral candidates were less successful. None of them achieved a majority or won a runoff.

But what is this party, and what are its main proposals?

MFG was founded in February 2021, at the height of the Covid pandemic crisis, with a goal to “restore our fundamental rights and our battered democracy”, according to the party’s website.

Much of the MFG’s basis and program relates to the strong criticism against the measures to combat the pandemic in Austria.

On the party’s program page, the word “corona” appears seven times – while “Austria” (or Österreich, in the German version) shows up eight times as a comparison.

The first paragraph starts with: “The government’s measures in the corona crisis are directed against democracy as well as freedoms and fundamental rights.”

However, scrolling by the “new corona politics” with points such as “immediate end to lockdown and mask mandates”, “testing only to confirm clinical diagnosis”, and “manufacturer must be liable for any vaccination damage”, it is possible to find other party proposals.

Among the other issues raised by MFG is the defence of more direct democracy.

In its program, the party defends the creation of the possibility of the population to gather motions of censure against the government and its members, meaning referendums and direct democratic votes of no confidence.

When it comes to criminal or civil law, the fight against corruption is one of the highlights, with the party proposing asset confiscation in connection to criminal offences. There are also many popular demands, such as better pay for nurses.

However, many of the proposals are still connected to the Covid crisis. For example, the session dedicated to “schools and kindergartens” has six points on the program’s page, four of them, including “immediate opening of schools”, directly related to the pandemic.

What does the likely end of pandemic measures mean for the party?

The constant references to the pandemic and the growth of the party’s presence in protests against restrictions and Austria’s mandatory vaccination law have led many to wonder how durable the party is.

MFG’s federal chairman Michael Brunner insists the party is not only based on its combative instance against the Covid measures.

“It is not our only topic; we will be needed for years to come”, he told Austrian daily Der Standard. Brunner, a Viennese lawyer, added that it would take years to deal with the repercussions of the Covid restrictions and measures.

READ MORE: Why is German-speaking Europe lagging on Covid vaccines?

Political scientists in Austria, though, are not quite so sure of MFG’s continuance, as Fabio Wolkenstein, a researcher with the University of Vienna, told Der Standard.

He explains that MFG will lack that “big issue” that draws people in once the pandemic is over. If the compulsory vaccination law turns out to be more symbolic politics than an impactful ruling, “the propaganda of the MFG will become thinner”, Wolkenstein said.

Nevertheless, there is still time for the party to grow on the vaccine-hesitant population, especially in a country still lagging on Covid vaccines (Austria currently has 69.88 percent of its entire population vaccinated, while countries such as Portugal have fully vaccinated 91.49 percent of their population).

This, the Tyrol elections have shown. Last year, MFG also won three seats in the Upper Austria parliament, achieving 6.23 percent of the local votes with a campaign mainly based on social media.

Even though Austria’s national elections are two years away, that doesn’t mean the party cannot change and continue growing. The extreme-right AfD was born amid the euro crisis in Germany, with a profound criticism of measures to bail out Greece.

It grew with the migration crisis in 2015-2016 and continues to have a significant presence in the Bundestag.

Austria has also seen its right-wing party change discourses, with FPÖ growing on criticism of migration and refugee policies but becoming a prominent symbol behind criticism of the government’s Covid measures over the pandemic.

Despite MFG claiming to be “outside” of the political spectrum – neither to the left nor to the right, but a “civic party”- it might be taking notes on how the right-wing has managed to mutate over the years and adapt to new big, polarising issues.