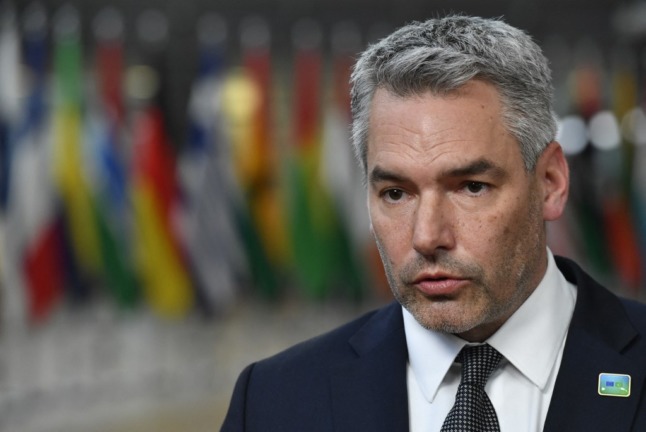 Speaking at the EU summit in Brussels, Austria’s Chancellor Karl Nehammer said the war was “not far from Austria”, the Krone newspaper reports.

“We live through war in Europe again, not far from Austria”, the chancellor said, mentioning that the Ukraine border is closer to the capital Vienna than the most-Western Austrian state, Vorarlberg.

He added that close neighbours and partners Hungary, Slovakia, and Poland share borders with the war zone. Because of that, it is the government’s goal to protect Austrians and people in the European Union in the best possible way and support people in Ukraine, Nehammer said.

The chancellor said Austria supports the sanctions planned on Russia and its oligarchs by the European Union.

“That means, of course, there will be systematic changes for Russian oligarchs in Austria”, the ÖVP politician confirmed.

No suspension of the SWIFT network

The European countries agreed on a series of sanctions on most of Russia’s banking system, several individuals (but not Russia’s President Vladimir Putin), and export restrictions. However, the bloc stopped short of cutting the country off of the SWIFT payment system, one of the requests made by Ukraine’s President Volodymyr Zelensky.

“The suspension of Swift would affect the Russian Federation less than the European Union”, the Austrian chancellor said. He added that Russia could use its own payment system and quickly switch to Chinese payment systems.

Nehammer said the sanctions regime was “dynamic” and that each individual measure could be further tightened up.

The SWIFT system is used for international financial transactions, including the EU’s payment for Russian gas.

Gas from Russia is still flowing into Austria

Russia is still supplying gas to Austria, Energy Minister Leonore Gewessler (Greens) said on Thursday after a meeting with experts from the Energy Agency and the ministry. She said that Austria has enough gas reserves to last until the end of April in an average winter and until March in unusually cold winter.

Gas storage facilities are currently only 18% full – the lowest level in the European Union, the Minister said on ZIB2.

The Green politician wants to introduce a stockpiling law by the summer, ensuring that there are higher gas reserves in Austria.

Kneissl has submitted a letter of resignation effective from Friday, Rosneft said in a statement.

The 57-year-old made headlines when she invited Putin to her wedding in 2018 and was photographed dancing with him during the event.

She left the Austrian government the following year and joined the board of Rosneft as an independent director in June last year.

Her resignation comes after Rosneft announced Friday that German ex-chancellor Gerhard Schroeder was leaving the board after five years, a day after Germany stripped him of official perks over ties with Russia.

On Friday, Kneissl told AFP that she intended to stay on for her one-year mandate but had told Rosneft in March that she would not seek a further term on the board. Kneissl’s personal website includes several interviews to RT, a Russian state-funded news organisation, the latest two days before Russia launched its military operation in Ukraine on February 24.

Rosneft in its statement thanked Kneissl for her work during the “complex” international situation, saying it was counting on future collaboration with her as an expert.