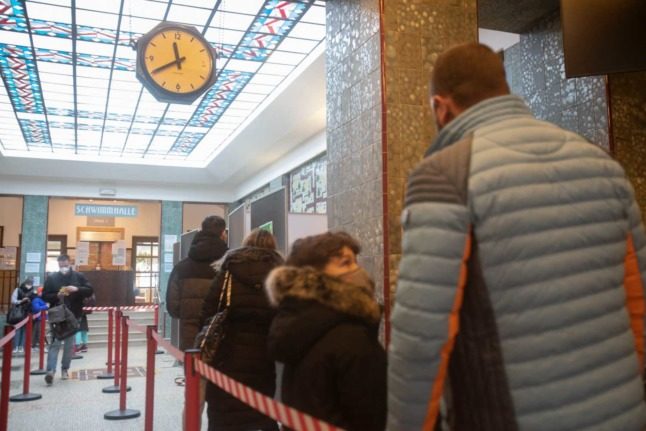 People queue for a vaccine against Covid in Vienna. The Austrian capital is taking steps to make it easier for those with a phobia of needles to get the jab. ALEX HALADA / AFP

Vienna has created a special vaccination offer for people who are afraid of needles.

Those anxious about being jabbed can be injected in a redesigned sauna area in the Brigittenau indoor pool which has been designed with comfortable seating and planting to create an atmosphere which will soothe people’s nerves.

The centre is accessed by a private door and you will not have to queue with others. Specially trained staff will also be there to ease nerves, including doctors and psychologists, who will wear street clothes, and will not wear gloves.

The offer is intended to help people who are phobic about needles and injections, but could also be used by those who experience strong conflicting views about vaccination in their communities.

The scheme is one of several steps the Austrian government has taken to remove the barriers to vaccination.

Another vaccine, Novavax, will be rolled out in late February.

Currently, more than 31,300 Austrians have registered for a vaccination with Novavax.

READ MORE: When will the Novavax vaccine be available in Austria?

It is hoped some people who currently refuse to be vaccinated may be persuaded to with the new vaccine, which is a protein subunit vaccine, using different technology to the mRNA and vector vaccines previously approved in the EU.

Approximately 69 percent of the Austrian population has been vaccinated against Covid-19, which is lower than most of western Europe.

Austria approved a compulsory vaccination mandate in February, with penalties for those who remain unvaccinated to be rolled out in mid-March.

The likely penalties include fines, with the Austrian government ruling out imprisonment for those who refuse to get vaccinated.