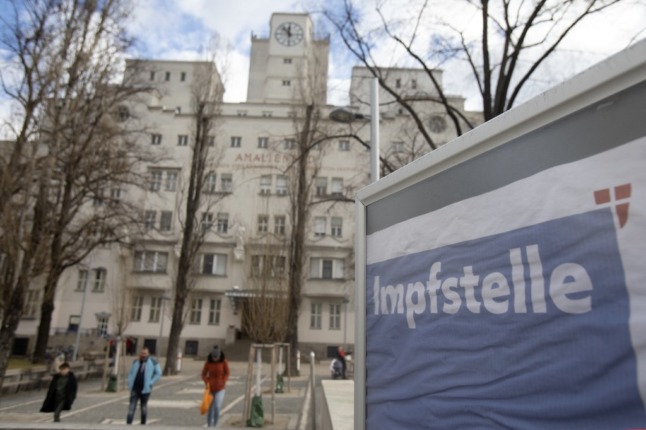 People go to get vaccinated at the Amalienbad swimming pool in Vienna, Austria. (Photo by ALEX HALADA / AFP)

As The Local reported on Thursday, parts of Austria have been basking in summer temperatures, with western Styria recording  21.9 degrees on Thursday, February 17th, compared to the usual temperature of around 3 – 5 degrees. The mild weather is set to continue today (Friday), and last into early next week.

However, in Salzburg, Burgenland, Upper and Lower Austria and Vienna there have also been weather warnings due to strong winds. Hurricane gusts of up to 167 km/h were measured in the mountains on Thursday.

Firefighters have been busy clearing fallen trees in Upper Austria and more than 20,000 households lost power due to the high winds.These winds should die down on Friday, apart from in mountainous regions.

A new expert commission which will advise on compulsory vaccination has been set up to ensure any future action regarding the law will be supported on a scientific basis.

Austria’s compulsory vaccination law – the first in Europe – is set to come into effect on March 16th, when “phase two” will mean police can also check vaccination certificates and report violations to the district administration authorities.

The commission will make its first report the week before, on March 8th. Health Minister Wolfgang Mückstein (Greens) pointed out Austria’s vaccination law was supported by a large majority and was drawn up in a joint process by the federal government with experts and parts of the opposition.

Vaccinations against Covid-19 with the Novavax jab could be possible as early as next week, according to Austria’s Ministry of Health. Currently, more than 31,300 Austrians have registered for a vaccination with Novavax.

It is hoped some people who currently refuse to be vaccinated may be persuaded to with the new vaccine, which is a protein subunit vaccine, using different technology to the mRNA and vector vaccines previously approved in the EU.

The process used to produce Novavax is therefore closer to traditional vaccines, which may encourage those sceptical of the mRNA or Vector technology.

The number of people who became naturalised as Austrian citizens rose by 80 percent last year. Statistics Austria reports this is mainly due to the new law that made it easier for descendants of victims of the Nazi regime to acquire Austrian citizens.

According to Statistics Austria, a total of 16,171 people received Austrian citizenship in 2021, including 6,448 residing abroad. The descendants of victims of the Nazi regime, most of whom came from Israel, the USA and the UK, accounted for almost 40 percent.

Needle-phobic? There’s a vaccination for you

Vienna has created a special vaccination offer for people who are afraid of needles.

Those anxious about being jabbed can be injected in a redesigned sauna area in the Brigittenau indoor pool which has been designed with comfortable seating and planting to create an atmosphere which will soothe people’s nerves.

The centre is accessed by a private door and you will not have to queue with others. Specially trained staff will also be there to ease nerves, including doctors and psychologists, who will wear street clothes, and will not wear gloves.

The offer is intended to help people who are phobic about needles and injections, but could also be used by those who experience strong conflicting views about vaccination in their communities.