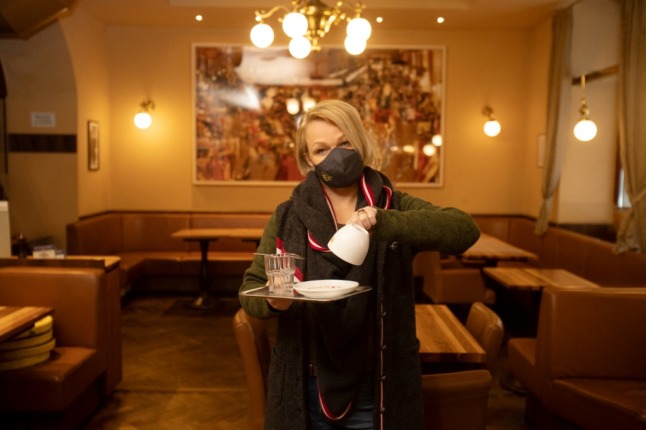 Cafe Hummel is one of the businesses calling for Vienna's night curfew to be scrapped. (Alex Halada / AFP)

Call to end curfew in Vienna from hotels and restaurant owners

Restaurant owners and Vienna’s Chamber of Commerce have had mixed reactions to Vienna’s plan to keep tighter Covid measures in place for bars and restaurants than in the rest of Austria.

Vienna will be the only state in Austria to continue to restrict access to restaurants, cafes and bars just to those who are vaccinated against or recovered from Covid-19 (the 2G rule).

However, the capital will also move its curfew from 22:00 to midnight from February 5th and extend event capacity for weddings and parties from 25 people to 50 people in line with the rest of Austria.

Markus Grießler, head of the division at the Vienna Chamber of Commerce, welcomed the continuation of the 2G rule and said the later curfew for restaurants and hotels would make Vienna “more attractive for guests as well as for the local population”.

However, a group of businesses, calling themselves the Vereinigte Gastro Wien (United Vienna Gastronomy) sent a letter to the authorities calling for the curfew to be completely lifted to ensure their economic survival. The group includes well known Viennese businesses such as Cafe Hummel, Figlmüller, the Schwarzen Kameel, Hotel Sacher and the Ritz Carlton

Compulsory vaccination in Austria moved one step closer on Thursday after the proposal was voted through by the ÖVP, Greens, NEOS and the majority of the SPÖ parties. In order for the law to come into force, the signature of the Federal President and the announcement are now required. This is expected to take place in the next few days.

New legislation is also being considered which could mean vaccinations such as Sputnik could be recognised in Austria, according to the Kurier newspaper, which saw a leaked draft of the papers. This would help retain nursing staff from Eastern Europe who are working in Austria.

Another new rule being considered would exempt people who were vaccinated twice after recovering from a Covid-19 from having to have a booster jab.

A trial is underway against the Lower Austrian FPÖ provincial councillor Gottfried Waldhäusl for alleged abuse of office. The allegation relates to  accommodation provided to unaccompanied child refugees at a centre bordered by a barbed wire fence area in the Drasenhofen municipality.

Broadcaster ORF reports a representative from the Public Prosecutors Office for Economic Affairs and Corruption (WKStA) said the facility was “not suitable accommodation in terms of the basic statutory provisions” adding that it gave the young people the “feeling of being locked up”.

Around 50 workers at the Wien Energie power plants who have been isolating at work for the past four weeks due to the Omicron wave can now go home.

The decision was made not to extend the isolation any further after learning more about the course of the omicron wave, the company said. The decision will affect employees at the Simmering, Spittelau, Simmeringer Haide and Flötzersteig sites.

At the beginning of the Covid-19 pandemic the workers at four Wien Energie power plants in Vienna were featured in a New York Times article as they moved into the plant and lived there for weeks to ensure the city would continue to be supplied with power during the pandemic.

The article focused on their love of jigsaw puzzles and potato goulash to get them through the long weeks away from home.