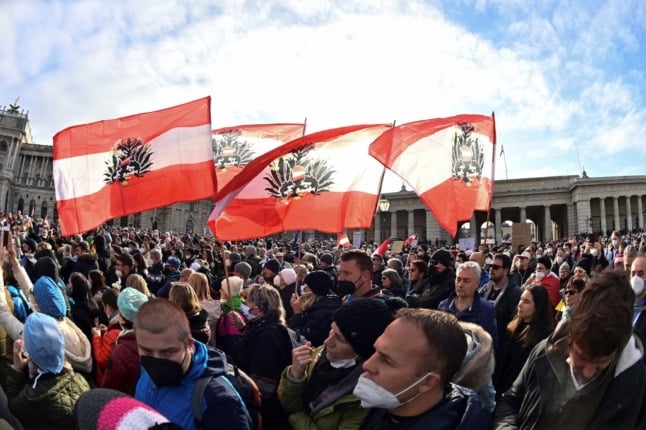 In this file photo taken on November 20, 2021 demonstrators wave Austrian flags during a rally held by Austria's far-right Freedom Party FPOe against the measures taken to curb the coronavirus (Covid-19) pandemic, at Heldenplatz square in front of the Hofburg Palace in Vienna, Austria. (Photo by Joe Klamar / AFP)

Under the legislation, unvaccinated individuals who are over the age of 18 and resident in Austria on either a primary or secondary basis will enjoy a grace period until 16 March, whereupon the police will begin spot checks to determine vaccination status. Fines of up to €600 are possible, which may rise to €3,600 in the event of non-compliance.

The programme is a flagship policy of the coalition government between the centre-right People’s Party (ÖVP) and centre-left Greens. It was devised in the autumn, imposed in response to a surge in infections from the Delta variant of COVID-19, which was aggravated by the relatively low level of vaccination at the time. It was supported by a lockdown for the unvaccinated, which is now being lifted.

Politically, the programme is high-risk. Social polarisation is already at high levels, perpetuated by the previously bellicose government rhetoric against the unvaccinated, who the far-right Freedom Party (FPÖ) and anti-vaccination list People Freedom Fundamental Rights (MFG) are attempting to champion.

Neither party is especially credible, with the FPÖ wavering over the radical course its leader, Herbert Kickl, has adopted. MFG is a single-issue party that would be unlikely to survive a legislative term, assuming it secures parliamentary representation at all. Yet polls indicate that the FPÖ and MFG enjoy the combined support of a quarter of the electorate.

However, such thinking exists along a spectrum and is not the sole domain of populists and the far-right. According to recent polls it extends into the political centre, with a narrow majority of respondents emerging that is either opposed to the programme or believing that it should be delayed. This is not reflected by the parliamentary landscape, where four of the five parties represented voted in favour.

The electoral impact is already being felt – and the ÖVP is particularly exposed. Nationally, pandemic management is but one part of the story, a potent ingredient in a toxic cocktail that is corroding the party.

In autumn 2021, the ÖVP underperformed in the regional elections in Upper Austria, one of its strongholds – while the insurgent MFG took up a small chunk of the vote. Last week, in the local elections in Waidhofen an der Ybbs – another ÖVP bastion deep in Lower Austria – the absolute majority of the ÖVP collapsed, with MFG winning 17% of the vote.

These are dark clouds that may herald deepening disaster for the ÖVP. The region of Tirol is set to hold local elections at the end of February, which are looking ominous for the ÖVP.

Meanwhile, Lower Austria is set to hold regional elections no later than January 2023. The region is the jewel in the crown of the ÖVP, the strongest of the pillars upon which the national party rests. Polls are currently indicating that Governor Johanna Mikl-Leitner will preside over the loss of the party’s absolute majority in the region, its last nationally, largely to the benefit of MFG.

Such a result would come as a severe blow to the morale of a party that is already facing an uncertain future. Following the resignation of former chancellor and party leader Sebastian Kurz from politics in December, the ÖVP remains directionless. Kurz’s successor, Karl Nehammer, was assigned by ÖVP grandees to steady the ship, whereupon he signalled an openness to dialogue with stakeholders largely shunned by his predecessor – while doubling down on law and order.

Last roll of the dice?

The mandatory vaccination programme is part of this agenda. Nehammer is banking on increasing the vaccination rate in order to guard against future variants that may emerge, rather than Omicron per se . Yet there is every possibility that it will flash in the pan.

The government is not helping this situation by sending mixed signals, namely through relaxing restrictions while the Omicron wave has barely begun to crest. Such ambivalence does not act as an incentive, especially amid declarations by the World Health Organisation (WHO) that the end of the pandemic in Europe is in sight.

Second, it is unclear whether the legislation will survive the scrutiny of the Constitutional Court (VfGH). A legal challenge is certain to be filed, with the VfGH typically issuing rulings within four months. If this backfires, the ÖVP and Greens will face further questions over their competence in addressing the pandemic.

This is playing out against a backdrop of tense relations between the ÖVP and Greens. In the coming weeks, a parliamentary committee of inquiry will be established to probe suspected corruption by the ÖVP. Such allegations already led to the resignation of Sebastian Kurz.

The Greens and particularly the ÖVP are not in a strong position to fight new elections. As the ÖVP wobbles, as further investigations mount, holding the line will prove challenging.

While the ÖVP may face heavy electoral losses, the polls indicate that the winnings for the other parties will be modest at best. This underscores the sombre truth: that the Austrian electorate are weary, disaffected and apathetic.

Marcus How is the Head of Analysis at VE Insight, a political risk consultancy based in Vienna